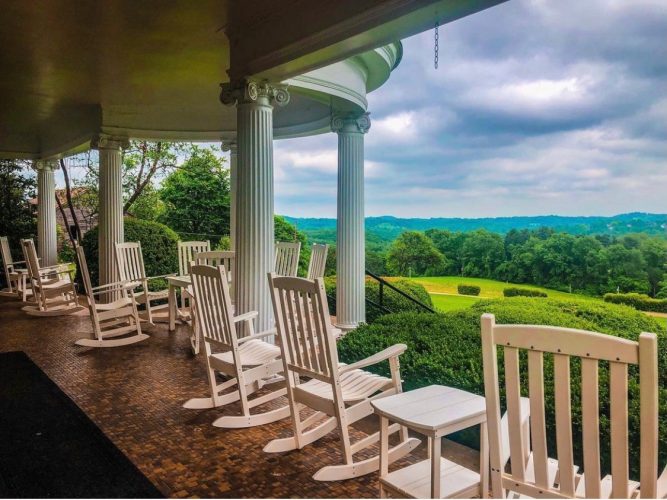 Photos Provided The front porch at Sandscrest Conference and Retreat Center has long been a dinnertime draw given its bucolic views. This late spring, the outdoor location will instead feature British-style teas. Think scones with jam and clotted cream, chocolate-dipped strawberries and cucumbers topped with salmon.

WHEELING — Pandemic restrictions on gatherings may be lifting, but area restaurateurs and their event kin say outdoor dining is here to stay. And, given the amount of incentive and practice 2020 provided, the coming round of alfresco may be bigger and better.

That is certainly the case for Char House on the Boulevard, a Bethlehem eatery that had the mixed blessing of opening in July 2020, according to Tracy Nolte, a member of the ownership team.

Pandemic bans on indoor dining kept the 160 seats inside the restaurant empty during early days. But, as the owners had planned from the get go on a comparable number of outdoor tables — complete with fire pits, an outdoor bar and a stage for music and comedy performances — it worked, Nolte said.

“We’re packed every weekend,” she added, noting many diners still prefer to enjoy their sea bass or wood-fired pizza on the plant-filled patio instead of using indoor seating. “It’s like you’re in the tropics. That’s what people tell us.”

Taking note of this trend, the Char House team both roofed and expanded the outdoor area in early May. It can now seat 140 — rain or shine.

Nolte suspects part of the allure is that the upscale-casual restaurant and its mostly-reservation customers are partnering in a dining experience rather than just a meal. That might include live entertainment or a specialty wine tasting. Or, it might be the novelty of place, she added.

“You’re more chill when you’re eating outdoors,” Nolte said. “We have hemlock trees draping over the patio and you can hear birds singing … It feels like you’re on vacation.”

Or somewhere even better, suggested Cheryl Harshman, director of the Sandscrest Conference and Retreat Center in northern Ohio County.

Harshman considers Sandscrest, which is operated by the Episcopal Diocese of West Virginia, to be a “thin place,” where the veil between worldly and otherworldly is translucent as, perhaps, fine china.

“When I drive up the driveway here I always feel a big exhale. It’s a quiet and beautiful place,” Harshman said.

Diners will have the opportunity to test her theory in a series of alfresco British-style teas that will be offered many of the Tuesdays in May, June and (if reservation-only demand is high enough) into the summer.

“Before COVID, we had Wednesday night dinners and the outside dining was always a favorite,” Harshman said. “Some people always wanted to be on the front porch or on the back patio… Sandscrest is even prettier outside than it is inside.”

Switching, at least temporarily, to teas makes sense during COVID, she added. It allows for continued social distancing and low contact between diners and staff. But, it also fills a long-term visitor need in a novel way.

Instead of the former full-on dinners, each tea table will share pots of various teas and a three-tiered server. The bottom tier will feature tiny, savory sandwiches and topped vegetables, such as cucumber with salmon. In the middle, British-style scones will share space with site-made strawberry jam and clotted cream. Top-tier sweeties will include such treats as chocolate-dipped strawberries and miniature lemon meringue pies.

“It has a certain party flavor,” Harshman said of the combo of purposely-mismatched china in the close view and an uninterrupted landscape of fields, woods and hills in the longer range. “To be outside with fresh air and sunshine … it satisfies us.”

It doesn’t require a restaurant or event center to get that feeling, noted Nat Goudy, manager of Wheeling Park.

That park, Oglebay and a system of smaller city parks have dotted the city with picnic tables in addition to offering entire shelters for reserved outdoor dining, Goudy said. It’s both an old and new thing.

“We’ve always had people coming out for lunch, no matter what,” he said of the popularity of open-use picnic tables around Wheeling Park’s pond and bandstand.

That picked up during COVID, when Goudy said families were getting curbside and driving it to the park for super-casual alfresco. “You wouldn’t believe how many Patsy’s Pizza boxes,” Goudy said. “The garbage was overflowing.”

But, in spite of a spate of iffy weather in early May, 2021 is shaping up to be bigger than even the year of COVID, he added. Shelter reservations, in particular, are up. “People are just champing at the gates to get out.”

Today’s breaking news and more in your inbox

Home Videos The WORLD of WINE – Wine News. Cheap wine, tasting notes and cooking with wine The World of Wine – May 2021 … END_OF_DOCUMENT_TOKEN_TO_BE_REPLACED

How to visit Napa Valley on a Budget. In this video Carson and I explain a few ways to enjoy Napa on the cheap. Tip and advice about how to visit Napa … END_OF_DOCUMENT_TOKEN_TO_BE_REPLACED

Home Videos Get To Know Argentina Wine | Wine Folly If you love Malbec, Argentina is your ultimate wine region. But that’s not … END_OF_DOCUMENT_TOKEN_TO_BE_REPLACED