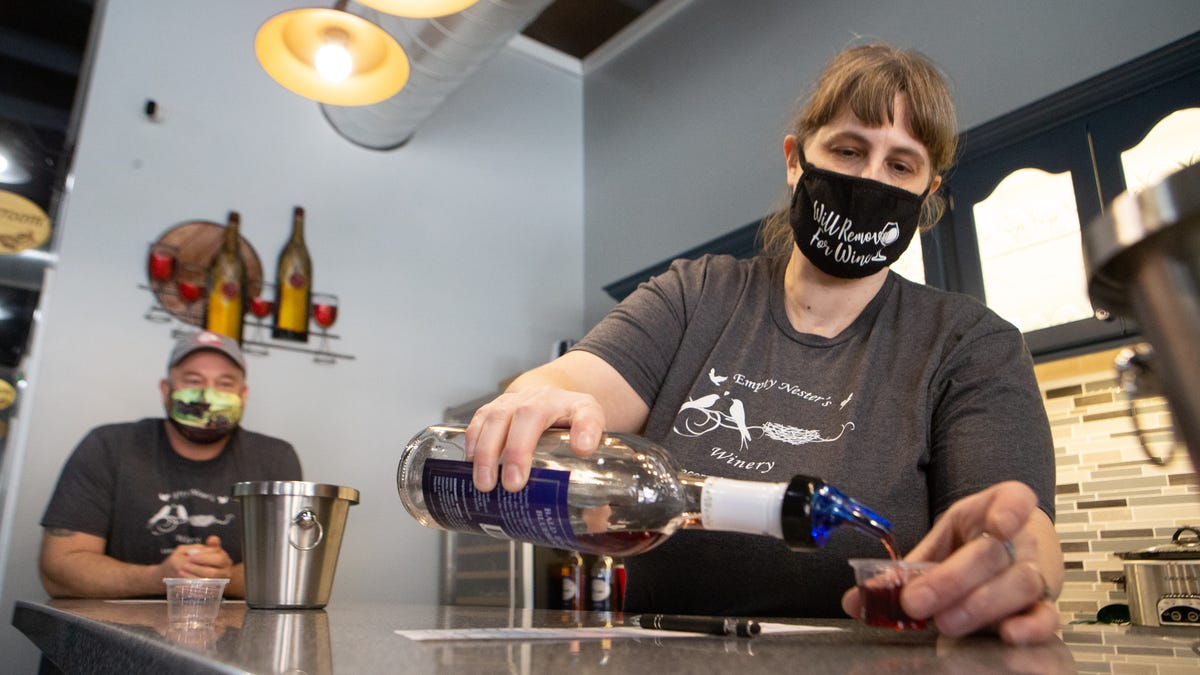 Lecompton residents Troy and Vickie Clark never expected to make a business out of their love for wine.

“We’ve always been one of those couples that goes to all the little wineries when we go on vacation,” Vickie said.

And until eight or nine years ago, that was the extent of it. Then, the couple took a trip to Niagara Falls.

“We probably went to 25 wineries while we were up there,” Vickie said.

During their travels, the pair decided to take their own crack at wine making, and upon returning home, they established a small operation in their basement.

“We started making wine from kits,” Vickie said, “and then, branched into recipes and just kind of went from there.”

It was fun, Troy added, so they kept making more and more.

“Pretty soon we had a lot and started giving it away to family and friends,” he said. “They were telling us, ‘You should sell this. It’s really good.’ I wasn’t sure about that.”

But then they went on another vacation, this time to Yellowstone National Park.

On their way back from Yellowstone, the pair stopped at a small wine store in Laramie, Wyoming. The store owner made a variety of unique fruit wines in the back of the store and sold them out front.

And that small, one-man operation inspired the Clarks to do something similar back home in Lecompton — a Douglas County town of fewer than 1,000 people, just northwest of Lawrence.

“It’s always been my dream to have a little downtown store, be my own boss and all that. It just never worked out,” Troy said. “When I saw that little storefront and I saw how he was doing things, I was like, ‘You know, I could do that.'”

The Clarks already had the product. It was just a matter of finding a location, scaling up production and putting a business plan into action.

More: Take a look at which Topeka businesses closed in 2020 — and which opened despite the odds.

A couple months after the Yellowstone trip, Troy and Vickie Clark purchased a storefront in downtown Lecompton, and that purchase laid the groundwork for the town’s sole winery. After more than two years spent renovating the place, the Clarks officially opened Empty Nester’s Winery, at 338 Elmore St., earlier this year.

The winery’s name began as a joke when they made wine as a hobby, Vickie said, as their kids are out of the house. But the name stuck and wound up on the winery’s logo and bottle labels.

Empty Nester’s Winery has about a dozen different wines available. They are all fruit wines — not your classic reds and whites — and feature names that hold historical significance for Lecompton residents.

The name “1918,” for instance, is a nod to when businesses on the block in which Empty Nester’s now sits were rebuilt, after being destroyed by a fire two years earlier. The name “Bald Eagle Blueberry” has a similar backstory.

“When Lecompton was first founded,” Troy said, “the settlers came over a bluff and saw a bunch of bald eagles flying around the river right here next to us, and they named the town Bald Eagle. About five years later, they changed it to Lecompton, after judge Samuel Lecompte.”

More: Southwest Topeka’s Brookwood Shopping Center has some notable changes on the horizon

According to Troy, there is a story about each wine’s name on the back of its bottle. When visiting the winery, customers may purchase wine by the bottle, by the glass or by sampling several different flavors.

The winery doesn’t have a kitchen, he said, because they didn’t want to take business from the cafe next door. But for those in the mood for snacking, Empty Nester’s does offer a couple different cheese trays, as well as chocolates from Hazel Hill in downtown Topeka.

According to the Clarks, Empty Nester’s Winery has gotten a lot of support so far from Lecompton residents.

It was a bit scary to open during the COVID-19 pandemic, Vickie said, but they had already put so much work into the venture that they didn’t plan to wait.

“Although, we’re not going to do our grand opening until April,” she added. “We thought we’d wait until we could be outside.”

In the meantime, they are looking to attract locals and travelers alike — including people like them who make winery hopping a habit.

“We knew it would be risky opening a business in a very small town,” Troy said, “but a winery is something that draws people.”

“It’s an event in itself,” Vickie added.

She and her husband hope to grow the business as their following increases. Right now, they are the only employees Empty Nester’s has, but they would like to bring more people on board in the near future.

“After we opened, I was talking to some other wineries, and they said January, February are the slowest months of the year for wineries,” Troy said. “I’m expecting by summertime to be pretty busy.”

And with the traffic they have seen so far, they have a reason to be optimistic.

“We’re really excited,” Troy said. “If this is the slowest time of the year, I think we’ll be OK.”

Home Videos The WORLD of WINE – Wine News. Cheap wine, tasting notes and cooking with wine The World of Wine – May 2021 … END_OF_DOCUMENT_TOKEN_TO_BE_REPLACED

How to visit Napa Valley on a Budget. In this video Carson and I explain a few ways to enjoy Napa on the cheap. Tip and advice about how to visit Napa … END_OF_DOCUMENT_TOKEN_TO_BE_REPLACED

Home Videos Get To Know Argentina Wine | Wine Folly If you love Malbec, Argentina is your ultimate wine region. But that’s not … END_OF_DOCUMENT_TOKEN_TO_BE_REPLACED