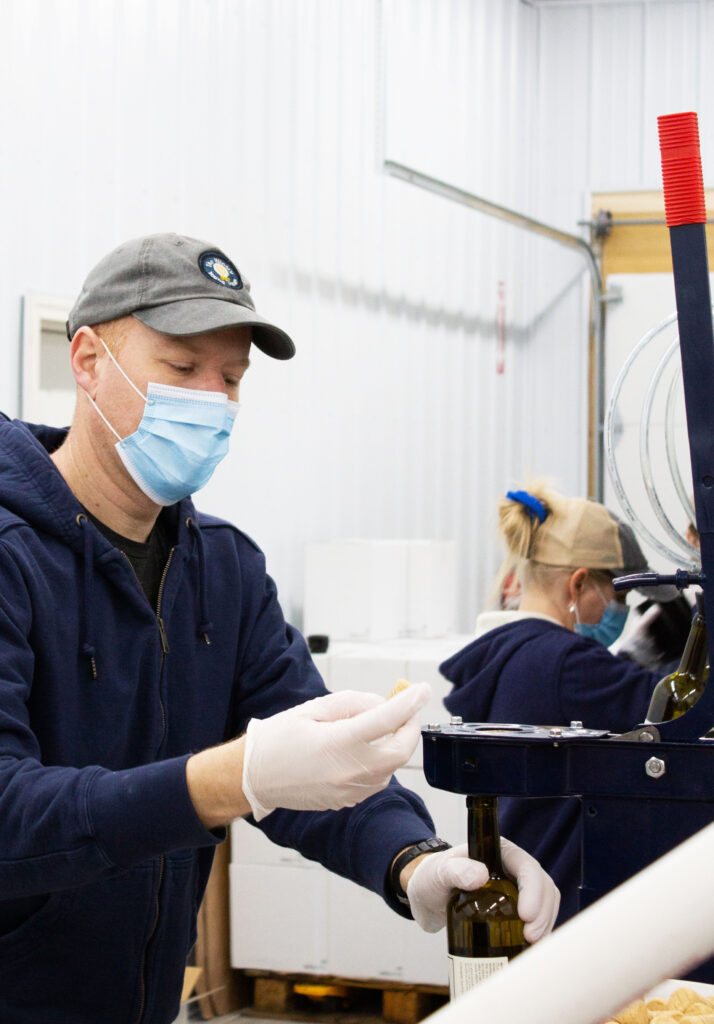 There are two reasons why someone gets into being a winemaker, according to Mark Young. They are either a romantic, who does it for love, or a scientist, who does it for their passion in chemistry; Young is the latter.

Dr. Mark Young is an assistant pharmacy professor who built up The Winery @ Young Farms with his wife, Abby. Young is in charge of making and bottling the wine while Abby runs the business side of the Winery.

“It’s truly a family business, so we do involve our kids,” Young said. “Our daughter and son pick blueberries, they help us harvest grapes. You can see them cleaning up glasses and mopping floors, and that kind of stuff.”

Young Farm didn’t originally start out as a winery. In 2008 the Young family had bought property that they currently live on that they wanted to grow and sell corn on. But after having a soil test they got told it was unlikely it would grow sweet corn. But in good news, it was good for growing blueberries.

This started Young’s idea to have a blueberry farm. After getting a good roll on having blueberry crop Young wanted to get into wine grapes after investigating into the University of Minnesota selective breeding that allowed the grapes to grow in the cold.

“I said let’s plant a few grapevines and just see if they grow up,” Young said. “And my wife said if you think you’re opening a winery, just get it out of your head right now. I said okay. So, slowly she warmed up to the idea and eventually, once we started growing grapes, we had all these grapes, and we needed something to do with them. So in 2017 we opened up the tasting room, and we’ve been open since then.”

Young’s personal perspective comes from the scientific side of it. Even his techniques can be traced back to the science. An example of this is using French oak barrels because the amount of air that travels through the barrel into the wine, or micro oxygenation, gives 90%  of red wine its taste.  Young trusts this process even though there is a push in the industry to get away from them because he has science to prove that it makes the wine better.

Young originally came to Ferris as a student in the pharmacy program. Young graduated from the College of Pharmacy in 2003 and practiced for 12 years before he decided to come back and teach at Ferris.

Even during his early years at Ferris, Young can remember making wine.

Wine and pharmacy share a lot of in Young’s eyes. Young teaches sterile compounding in his classes. The aseptic technique is very similar when you’re making food product, like wine, and intravenous compound, like medication. The idea of biochemistry and knowledge of biology and chemistry is similar in pharmacy as it is in winemaking. Young said there’s a lot of science behind winemaking and a lot of art and lore surrounding it as well.

There are currently eight wines sold at Youngs Farm and all of them are from grapes grown by Young except for two, which they buy from local growers. Every year Young plants more grapes trying to find the perfect amount to grow. At the moment they have about five and a half acres of blueberries and grapes. This is because they have been fortunate to sell out of their vintage except for in 2020.

Aside from wine, Young Farm sells bread, oils and cheese crackers along with blueberry jam. They also offer apparel for customers to buy.

The Winery @ Young Farm had limited capacity during the pandemic and that made their jobs harder Young said. They had to hire more staff to keep up with the cleaning and all of the compliance that was mandated. With that and the limited capacity it became tough because Friday nights and Saturdays are busy times, and they had to turn a lot of business away. But they were compliant and Young thinks their clientele and customers really appreciated that.

“We really hold true to this idea that the backstory is as important as the wine itself,” Young said. “I don’t sell our wine anywhere except right at our winery on purpose. If you buy a bottle of wine sitting on a shelf at Meijer, you judge it only on the wine. You know nothing about it really. You know nothing about the backstory whatever they put on the bottle, but I really want people to be closer to their food and closer to their drink so you have to come out, almost force you to interact with us so we can tell the story about the wine, about how it was made and the struggles.”

Young is contacted at least once a week during the season by a restaurant or distributor that wants to sell their wine.

A couple years ago, Young struggled with his white crop. There was rain when they didn’t need it, and no rain when they did. The wine was not to their normal standard. Young said that if he can’t communicate that to the customer, then they think, “Oh, this guy just makes bad wine,” but when the customers understands the struggle, then those tastes come through.

Staff has to work the tasting room as well as help during the bottling process and that’s on purpose. While some wineries buy wine from other wineries Young doesn’t participate in that. Everything sold is made on site, and with that they are able to tell their story.

“We want our staff to see the process so that when they’re talking to customers, they really understand what that is,” Young said. “After they actually put the hands on the bottle and help bottle they then they become part of it too. For the whole experience.”

When it comes to balancing being a professor and owning a winery, Young makes sure to have boundaries. From 9 a.m. to 5 p.m. during the workweek, Young devotes his time to Ferris, although that doesn’t mean there isn’t times he has graded papers after 5. But typically he leaves nights and weekends for the winery.

“I’ve never had to worry about what I’m going to do tonight,” Young said. “There’s always a whole bunch of friends in my front yard hanging out ready to drink wine. That’s probably the best part is seeing and interacting with people and talking about wine.”

Because The Winery @ Youngs farm doesn’t open until later in the year, Young doesn’t see many of his students since many have already gone home for the summer. This year they open on May 19.

For more information you can go to their website https://www.thewineryatyoungfarms.com.

Home Videos The WORLD of WINE – Wine News. Cheap wine, tasting notes and cooking with wine The World of Wine – May 2021 … END_OF_DOCUMENT_TOKEN_TO_BE_REPLACED

How to visit Napa Valley on a Budget. In this video Carson and I explain a few ways to enjoy Napa on the cheap. Tip and advice about how to visit Napa … END_OF_DOCUMENT_TOKEN_TO_BE_REPLACED

Home Videos Get To Know Argentina Wine | Wine Folly If you love Malbec, Argentina is your ultimate wine region. But that’s not … END_OF_DOCUMENT_TOKEN_TO_BE_REPLACED