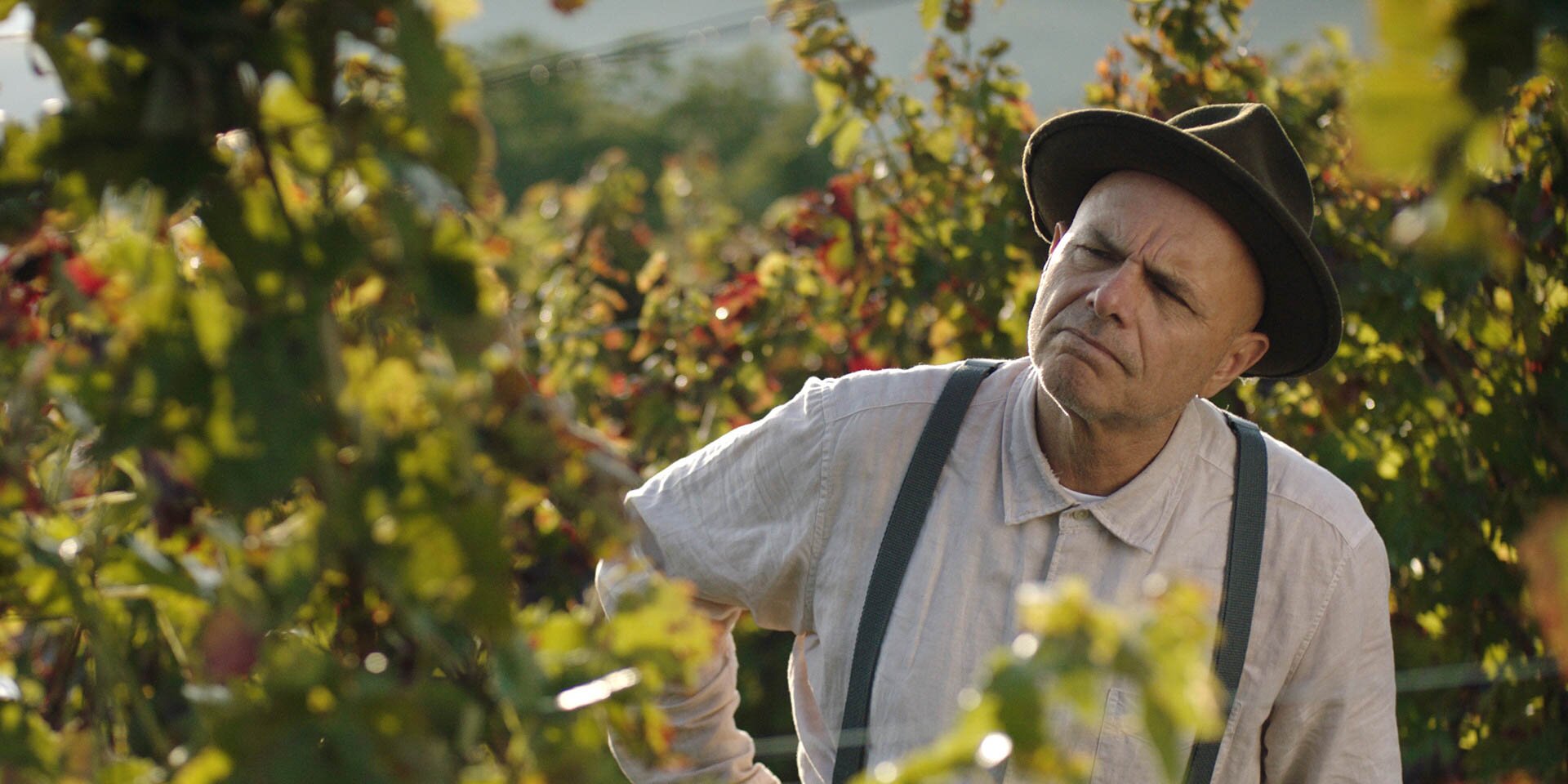 From the Vine treats the viewer to beautiful scenery, but more than that, a life rescued by making wine.

How many good wine movies are there? Sideways, sure. Bottle Shock? Meh. The French release You Will Be My Son? One of my favorites, though no one seems to know about it (seriously, check it out). Let’s throw the newly released From the Vine, starring Joe Pantoliano, into the thumbs-up zone.

I was initially wary of this film, because the “middle-aged guy has crisis and realizes he needs to change his life” genre is pretty well worn, but hey, plots are a dime a dozen anyway: “kid’s parent dies and evil step-parent has to be dealt with” could apply just as easily to Cinderella as it could to Hamlet.

In From the Vine, Marco Gentile (Joe Pantoliano), CEO of a car company, hits an ethical dilemma when he realizes the board of directors isn’t going to allow him to keep the now-deceased founder’s green, environmentally responsible initiatives going. A workaholic, he’s also estranged from his wife and adult daughter. In a moment of crisis, he quits his job and abruptly moves back to the small town in Basilicata, Italy, where his grandfather once had a vineyard.

Pantoliano, known for his roles as the murderous Ralph Cifaretto in The Sopranos and the traitorous Cypher in The Matrix, may come as a surprise as the charming, lovable Marco. He deftly manages to balance Marco’s fish-out-of-water confusion at the quirks of his new home with the character’s deeply etched sense of loss. As Pantoliano said when I spoke to him, “Marco’s really lost; he’s in search of something. He doesn’t even realize he’s lost the love of his wife. He’s lost his daughter. He’s lost everything that really is important. Even his native language. But going to Acerenza, feeling the magic of this village, returning to a time that’s untouched, in a way it tells him—and us—that there’s more to life than dying and being the richest guy in the cemetery.”

So what about the wine? Of course, the key to any good movie about wine is that wine is just a vehicle to bring us into the drama of the characters. The grandfather’s vineyard has been taken over by the local government for non-payment of back taxes. Marco buys it back, hires the townspeople to help him start making wine again, and in doing so brings life back both to himself and to Acerenza. When his wife and daughter arrive on a mission to bring him back to the U.S.—he’s cleaned out the family 401K to invest in the vineyard, and they basically think he’s lost his mind—they’re seduced as well by Italy, by the vineyard, by winemaking, and by the taste and sensuality of good wine. That’s not a metaphorical statement either: Marco and his wife’s relationship is amusingly rekindled as they’re standing knee-deep in a vat of crushed grapes.

Pantoliano drew a bit on his own experience as an Italian kid in Hoboken. “I was born in 1951. We had tenement buildings and basement cellars, and 100-by-200-foot backyards, and I remember all these old guys having three or four vines, and making red from it in their basements,” he told me, but largely the movie was a voyage of discovery for him as well. I asked him if making it also made him want to own a vineyard. “Not at all!” he said with a laugh. “But I’d certainly like to live in Italy for a while, and spend more time there.”

From the Vine isn’t a dark movie. Marco’s internal crisis may drive it forward, but the joy he finds in making wine, plus the quirky denizens of Acerenza, the stunning beauty of the Italian vineyards, and moments of sheer comedy lift it up; the film pulls you along with delight, not despair. No spoilers here—you’ll have to watch it to see how his newfound life in Basilicata and his need to reconcile with his family gets resolved. Safe to say, though, it involves vines and wine.

Home Videos The WORLD of WINE – Wine News. Cheap wine, tasting notes and cooking with wine The World of Wine – May 2021 … END_OF_DOCUMENT_TOKEN_TO_BE_REPLACED

How to visit Napa Valley on a Budget. In this video Carson and I explain a few ways to enjoy Napa on the cheap. Tip and advice about how to visit Napa … END_OF_DOCUMENT_TOKEN_TO_BE_REPLACED

Home Videos Get To Know Argentina Wine | Wine Folly If you love Malbec, Argentina is your ultimate wine region. But that’s not … END_OF_DOCUMENT_TOKEN_TO_BE_REPLACED