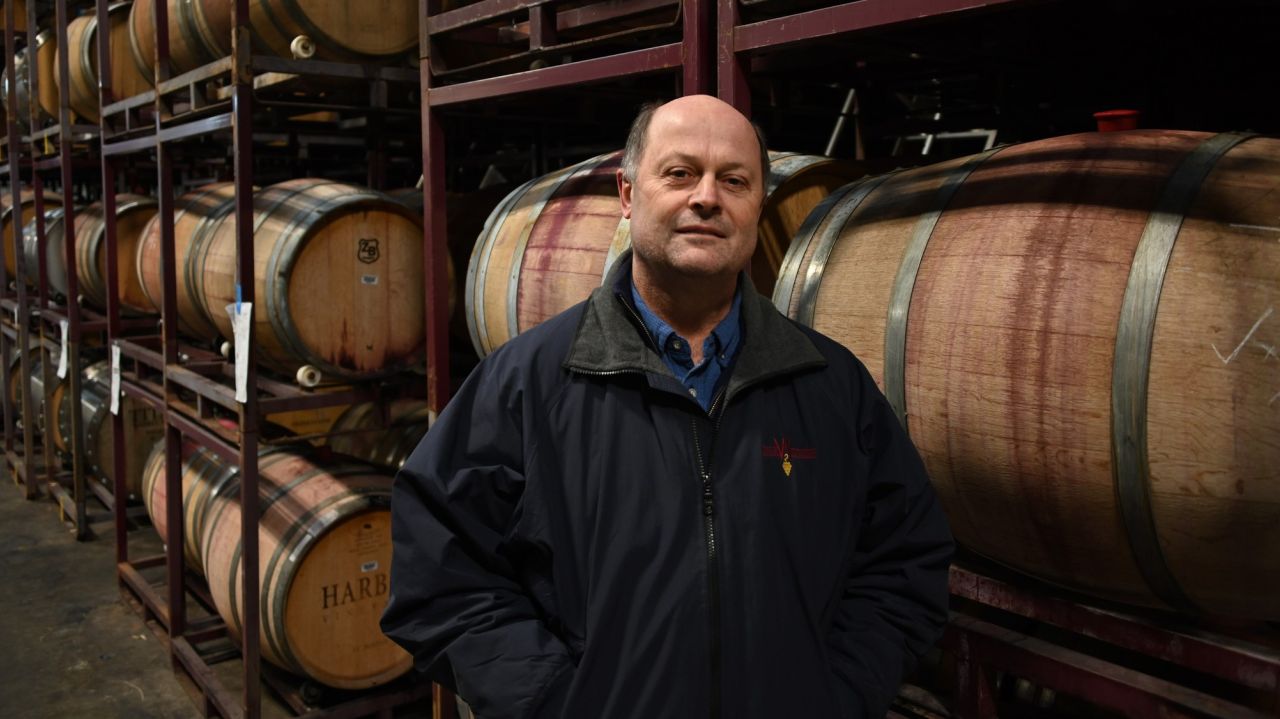 There may be no better indicator of the state of the Long Island wine industry than the accumulation of towering stainless-steel wine vats that line the perimeter of Premium Wine Group in Mattituck.

But the progress of the 20-year-old company, which makes wine for more than a dozen local producers, is more than just a tale of a Long Island wine region growing in volume and credibility.

It’s also a story of a local company with international reach that has brought wine from some of the world’s best-known regions to Long Island to be bottled and sent off to market.

Today, Premium, which does everything from crushing grapes to shipping finished crates, has seen the largest part of its growth in the contract-bottling business — wines from around the globe sent in container-loads to Long Island for bottling and shipment to regional distributors y.

For Russell Hearn, the chief executive officer who has run the business since its 2000 inception, Premium’s record of steady growth, despite a period of uncertainty when the company changed hands in 2013, is one that he expects to continue apace — growth that is justifying the new owner’s $2.75 million in investments for new storage tanks and a modernized bottling operation that will triple its current capacity. The company is in the planning stages of increasing warehouse space next year, with another $1 million investment.

“Local grape production continues to grow,” he said of 18 local grape growers who use Premium to make their wines. The 450 tons of grapes produced by eight local growers in 2000 has grown to some 1,900 tons in 2020, and the number of labels has doubled.

“There is still very large potential growth for the wine industry on the North Fork,” said Jeffrey Haas, the owner of Premium and managing member of Catamount Liquid Assets, a holding company in Scarsdale. “There are many, many acres that are available to be planted. It’s not going to happen overnight, but eventually the region will get even more robust.” There are some 3,000 acres of vines currently planted on Long Island.

Haas had been a customer of Premium’s starting in 2009, but had the chance to buy the company out of receivership in 2018 and jumped at it. The company in 2013 had been bought from its founders, the Lieb family, by an investment group, Southport Lane Management, but legal troubles following a Securities and Exchange Commission probe of Southport led to a sale of the assets.

The price was $6.75 million, including Premium’s brands and equipment, a vineyard estate formerly owned by the Liebs, and Lieb’s vineyards and brand.

Growing along with LI vineyards

For Hearn, the growth is the result of hard work on the part of Long Island’s wine pioneers and their successors to increase the quality and output of local vineyards.

“The Long Island wine industry has been around for the last 40 or 45 years, but in the last 20 years especially, while I wouldn’t say that we’ve finally ‘made it,’ I would say we finally got credibility in the New York area and outside the New York area. Several wineries have seen some pretty rapid growth.”

“I think the North Fork is going to have a significant renaissance,” he said. “Maybe a birth, not a rebirth. Less than a third of the acreage that could be planted for vineyard is currently planted. And presumably more will be transformed into vineyard and there will be more of a need for Premium’s services.”

Premium is “a brain hub for wine making,” said Chiara Edmands, owner of Onabay Vineyards of Southold, which has been making its wines at Premium for around a decade. She said working with Premium “allows us to offset some of the cost” of crushing, making and storing wine, while providing access to some of the best minds in the region.

A ‘think tank’ for winemakers

Each of the producers has control and involvement, to varying degrees, in the making of its wines at Premium, from crushing and fermentation to storage and bottling. Some of the region’s best-known winemakers have their roots at Premium, including Erik Bilka, winemaker at Pindar Vineyards.

“The infrastructure for bottling can be cost-prohibitive for a small vineyard,” Edmands said, noting the vineyard sells grapes to other producers to offset some of its costs. “It’s a good think tank for people out there.”

Most of the growth Premium is seeing in recent years is from a surge in contract bottling — the business of taking wines made around the world and using Premium’s high-tech systems to bottle, pack and ship them to U.S. markets.

Bottling not only brings in significant new business for Premium; it helps maximize the company’s investment in equipment because it makes use of equipment year-round that otherwise might sit idle after the fall and Long Island’s winter grape harvest, winemaking and bottling. “It uses equipment and space that would typically be empty for six months of the year,” Hearn said.

Premium has had a contract-bottling operation for the past eight or nine years, but has seen “dramatic” double-digit growth in the past two to three years, Hearn said.

This year, the company will upgrade its bottling operation to increase capacity to 8,000 bottles an hour from the current 3,500. The new system will be “totally automated,” said Hearn, requiring little human intervention from bottle to pallet.

The company plans in the coming year to convert a section of its back lot to around 9,000 square feet of storage capacity. Its current cramped office space will be increased by some 1,800 square feet.

It’s easy to understand why foreign winemakers see the advantages of bottling in Mattituck.

Foreign wine is shipped in special 20-foot liquid containers that can hold the equivalent of 2,700 cases of wine, Hearn said. A 40-foot container of finished, bottled wine can hold just 1,200 cases. The savings can amount to $7 to $8 a case.

Premium also saw a surge from foreign winemakers seeking to avoid stiff tariffs under the Trump Administration. French companies faced a 25% tariff when their bottled wine reached U.S. shores, increasing the attraction of bottling here. The tariff has since been eased.

Premium’s earliest days were built on its ability to serve a small circle of local growers who looked for economy in making wines while tending to their grapes.

“Forty years ago these Long Island vineyards and wineries were primarily second businesses for someone,” said Hearn. Many of those early pioneers have passed on or sold their vineyards, but in some cases such as Paumanok Vineyards and Jamesport Vineyards, a second generation has taken on the work to cultivate and improve the business.

“There are now a number of producers that are doing quite well. The state of the Long Island wine industry is quite good right now,” Hearn said.

One of the early Long Island brands, Lieb Cellars, for example, was available only in New York eight or nine years ago and is now marketed across 12 states, he said.

The Premium stable of brands also includes the Pump House brand, which Haas bought from Hearn in 2013, and has cultivated into a popular brand selling in small containers to restaurants. Premium also owns the Bridge Lane brand, which Haas decribed as “more approachable, lifestyle brand,” available in 4-pack bottles, cans, boxes and kegs. “It’s the predominant brand of the wholesale side of the business,” he said.

Among the wines being made by Premium are RG|NY wines, formerly operated as Martha Clara Vineyards and now run by the Rivero Gonzalez family; Croteaux; Clovis Point Vineyard, Harbes Vineyard, and Hearn’s own wine brand, Suhru Wines, with a tasting room on Main Road in Cutchogue. Onabay Vineyards and Brooklyn Oenology wines are also made at Premium.

The local market continues to see growth, despite even the harsh effects of the pandemic, which shut down tasting rooms last spring at the start of the 2020 season. Hearn said the shutdown brought out the best in local producers, leading many to reach new audiences online, while catering to their long-time local customers. Maria Rivero-Gonzalez sold wine tasting packs and offered online tutorials; others, like Sannino Vineyards, used their parking lots for drive-through sales of wine paired with other local produce; Giovanni Borghese began delivering wine himself to points as far as Boston, Florida and California.

The local growth has continued so steadily that Hearn’s chief concern for the local market is keeping up with demand.

“What’s the No. 1 short-term issue for North Fork wine?” he said. “Supply. We as a region have not invested enough for the future. We’re not planting enough” new vines to meet the demand.

The problem is rooted in a concern five years ago that the market was experiencing a glut, Hearn said. “It never came to fruition.” New entrants such as Soloviev are amassing production capability while planning to get their winery and tasting room operations off the ground. RG|NY has done some new planting, as have Pindar and One Woman Wines and Vineyards in Southold. More is needed, Hearn said.

Hearn attributes the increase in demand to an increased consciousness among consumers of locally grown products.

Overall traffic might be lower during a time of COVID-consciousness, he said, but “more serious” people are coming to tasting rooms like his own, Suhru Wines. “There’s fewer people but larger volumes,” sold to those more serious wine lovers, he said.

Hearn said the growth of the Long Island wine region is one that continues to impress him, given its relative age.

“The Long Island industry has come a long, long way in such a short period of time,” he said, noting that he’s been in the region for 30 of its 45 years. “Other areas of the world that have been making wine for hundreds of years would look at our region and say, ‘You are pretty established after just 40-plus years old.’ ”

Wines made at Premium Wine Group

The winemaking facility on the North Fork contracts with local vineyards and vintners to take over tasks ranging from crushing grapes to shipping finished cases. Its bottling facility, which also caters to foreign companies, plans to upgrade this year to increase capacity to 8,000 bottles an hour. Among the Long Island brands that work with Premium:

Home Videos The WORLD of WINE – Wine News. Cheap wine, tasting notes and cooking with wine The World of Wine – May 2021 … END_OF_DOCUMENT_TOKEN_TO_BE_REPLACED

How to visit Napa Valley on a Budget. In this video Carson and I explain a few ways to enjoy Napa on the cheap. Tip and advice about how to visit Napa … END_OF_DOCUMENT_TOKEN_TO_BE_REPLACED

Home Videos Get To Know Argentina Wine | Wine Folly If you love Malbec, Argentina is your ultimate wine region. But that’s not … END_OF_DOCUMENT_TOKEN_TO_BE_REPLACED