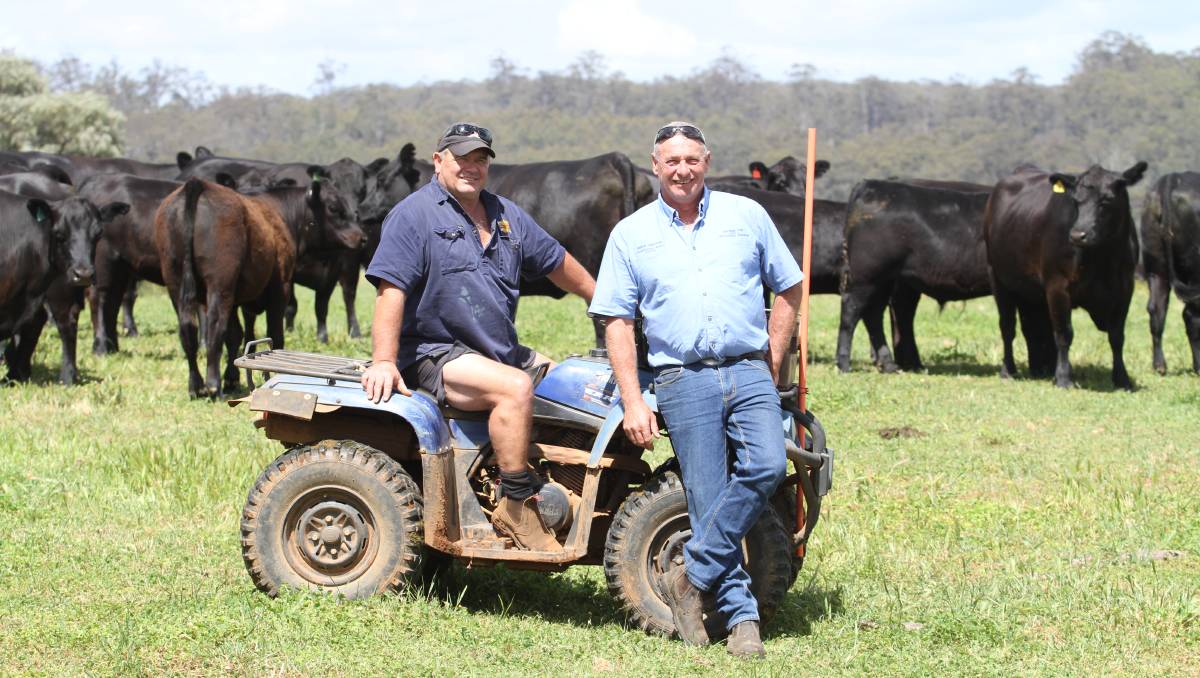 FARMERS need to be skilled across so many areas and running a mixed farming enterprise requires even more dexterity, the key to the success of all elements is understanding the balance according to Dave Radomiljac.

“What we started with, to where we are now is a story in itself,” Dave said.

“We certainly wouldn’t change it for the world, but it does entail a lot of work across a lot of different areas.”

Cattle have always been a part of their farming enterprise, but the type and breeds have changed over the years.

“I have been breeding cattle all my life,” Dave said.

“I enjoyed helping my parents out, we had a dairy herd back in the very early days.”

“We bred Simmentals and then in the late 1980s early 90s we switched to breeding Angus cattle.

“We now have a pure black Angus herd.”

Their 75 head breeding herd is the optimum number for the 100 hectares of pasture given over to the operation each year.

The Radomiljac’s Angus beef operation works completely in symbiosis with many of the other areas of their farming system and they have spent a long time fine tuning their herd, with a focus on the best genetic traits for their requirements.

“We are always really busy with all the different areas on the farm, so for us easy care animals are a must,” Dave said. An example of the Radomiljac familys 2020-drop calves which sold in the Independent Rural Agents sale in December last year.

“The other easy care attributes of the breed like no horns, good feet, good eyes, low birthweight and fast growth are all reasons we like the breed.”

He said that they had less issues with the Angus and while they may start small with lower birthweights, they had rapid growth rates in their calves, making them ideal for their program.

The Radomiljacs initiated their Angus breeding on the Strathtay stud genetics and then switched over to the Lawsons stud bloodlines about eight years ago.

When choosing their bulls Dave said he really had one prerequisite in mind.

“Our number one priority is low birthweight,” he said.

“We need to have an easy care, easy calving herd, because of all the other parts of the farming operation.”

He said they deferred to Colin Thexton, Independent Rural Agents, when attending bull sales, to assist in choosing the right bull for their needs.

“For us Colin knows everything about our cattle and he knows what we need.”

Consistency is the key to their cattle operation and having an innate understanding of what works for them has meant they have a very streamlined enterprise.

“Each year we retain a dozen of our best heifers,” Dave said.

“We have been doing this the same for the last 40 years. “We select reasonably hard, to sell off anything that does not make the grade and has not performed in the previous season.

“The other thing we do as a rule is, we only keep a bull for three years/seasons.

“This way we always have three bulls on the go at a time and the new young bull goes straight in with the heifers.”

The older bull is sold, but as it is only four or five years of age and still able to perform it is sold on to another farm.

“We never send the bulls to be sold for slaughter,” he said.

“It is always worthwhile to sell to another farmer for breeding, especially as you have purchased really good genetics at a good price and they will be good for another program.”

Calving begins in the first week of January and just over a week in there was already 50 per cent of the calves on the ground.

Dave said they always had successful calving percentages and would be disappointed with anything less than a 95pc calving rate.

“We also leave the bulls in,” he said.

“A late calf is better than no calf and we are really lucky environmentally where we are with rainfall and feed.”

Growing potatoes and cattle works out very well for the Radomiljacs, as they are able to do both in rotation of pasture paddocks and hay and silage production.

“We have an eight year rotation program,” Dave said.

“The cows graze on a rotational grazing system run between 10 different, 10ha paddocks on a cycle during the season.

“We grow potatoes and after the potatoes we reseed that paddock to new pastures consisting of oats and ryegrass to cut down each year.”

He said they seed down with new pastures from year to year, because they were constantly developing new blends of ryegrasses and clovers that continue to produce better results.

“The pastures that we do use these days are so much better than they were 20 years ago,” he said.

“They are much higher yielding.

“It really works, for example our hay is cutting at around three tonnes per acre, because we are getting that really good bulk in it.”

With such a good feed regime they aim to get their steer calves to about 390-400 kilograms and their breeding heifers average about 370kg.

They sell through the Independent Rural Agents (IRA) sale in the first week of December, each year.

“This year the calves were a bit bigger than usual,” Dave said.

“They looked really good and all sold to South Australia.”

The Pemberley operation is very different from many other farming enterprises in many aspects and this includes its mix of produce and the ways in which they operate.

However, Dave said the key was always to aim for the highest standard.

“Focussing on producing quality should always be the priority,” he said.

They now run the cattle, potatoes and pastures along with producing up to 1000t of wine grapes, produce marron through their dams and are looking forward to their first truffle harvest, next year, which will mark five years since planting the 2ha trufferie.

“We offer a unique experience here at Pemberley,” Dave said.

“Our Wine Experience is by appointment only, but you get to taste our wines and produce and see the farm for yourself.”

Wine lovers are invited to book a visit for the Pemberley Wine Experience in the cellar door overlooking the vineyard and the Koi pond.

Groups numbering between two to 10 can book in to see what Pemberley has to offer.

This includes an individualised wine tasting, local seasonal offerings, the opportunity to hear the history of the farm and to meet the family.

You will be taken for a short walk around the vineyard and the veggie patch to learn about the farm.

Home Videos The WORLD of WINE – Wine News. Cheap wine, tasting notes and cooking with wine The World of Wine – May 2021 … END_OF_DOCUMENT_TOKEN_TO_BE_REPLACED

How to visit Napa Valley on a Budget. In this video Carson and I explain a few ways to enjoy Napa on the cheap. Tip and advice about how to visit Napa … END_OF_DOCUMENT_TOKEN_TO_BE_REPLACED

Home Videos Get To Know Argentina Wine | Wine Folly If you love Malbec, Argentina is your ultimate wine region. But that’s not … END_OF_DOCUMENT_TOKEN_TO_BE_REPLACED