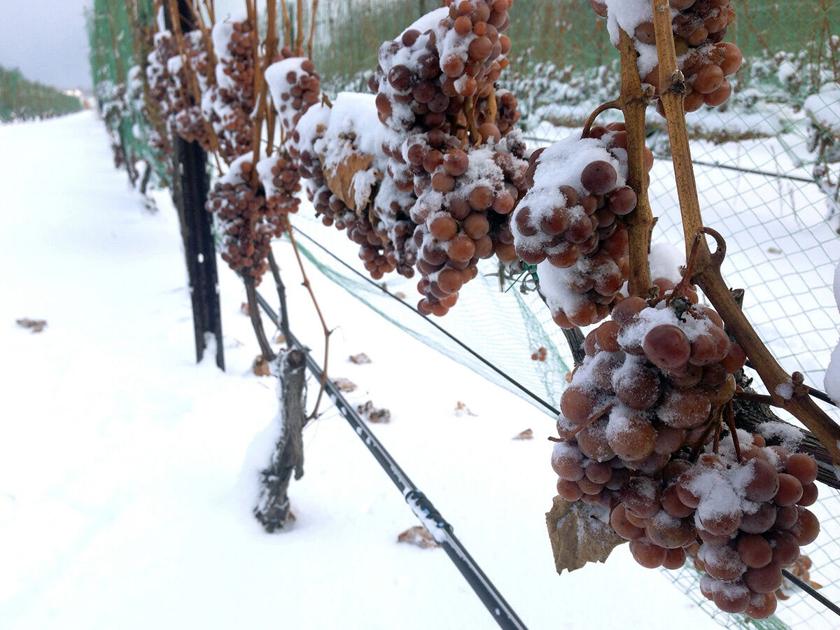 Overnight lows were as frigid as –18 C and daytime highs soared no higher than –8 C, allowing pickers to work night and day to bring in the harvest.

“Picking really started in earnest in the early morning hours of Feb. 9 and continued in the day in the sun, which was really nice.”

However, Okanagan wineries have to wait until Mother Nature decides it’s time because regulations require icewine grapes be picked only when it’s –8 C or colder.

The first harvest of the season was actually weeks ago on Dec. 23 when two tonnes of frozen grapes were picked in vineyards in a frost pocket in the Garnet Valley outside of Summerland.

Then two more tonnes were harvested Jan. 24 in West Kelowna and Keremeos.

That means the vast majority of the 300 tonnes of frozen grapes expected to be harvested in the Okanagan this season came in over the past few days.

Pickers are put on standby when the forecast calls for a deep freeze and then bundle up and get to work, clippers in gloved hand, usually in the dark of night, to bring in the precious commodity.

While icewine production was pioneered in Germany, Canada has become the world leader.

The Great White North is a unique place where summers are warm enough to produce grapes for wine, yet also cold enough in the winter to freeze some of those grapes.

While Canada produces the most icewine, it is still a small-production niche product that is exported to Asia more than it is consumed at home.

Grapes left to freeze dry out and the water and sugars in the fruit concentrates so that when it’s picked at at least –8 C and pressed, the juice is incredibly sweet.

The key with well-made icewine is that it maintains lively acidity to offset the sugar, so while the nectar is undoubtedly sweet, the drink is delicious, luscious and balanced.

It can be drunk on its own as an aperitif or dessert or paired with strong cheese, spicy, salty or rich foods or fruit-or-chocolate-based desserts.

Relying on fickle Mother Nature, limited quantities and high cost of production means icewine is expensive by the time it gets to market.

Generally, icewine comes in smaller 375-ml bottles and can cost anywhere from $50 to $100.

For example, the 2017 Stag’s Hollow Vidal Ice Wine is $55 and has aromas and flavours of peach, apricot, pineapple, honey and caramel.

Even if you’ve left your Valentine’s Day planning until now, there’s still time to come out looking like a hero.

First of all, buy some sparkling wine, then some nice cheese and good chocolate and you’ve got it made. Throw in some flowers and your wife or girlfriend will love you forever, or at least until the end of the day.

An ideal bubbly is 2016 Fitz Brut ($33) from Fitzpatrick Family Vineyards in Peachland. It’s made in the classic Cham-pagne style and will pair beautifully with camembert or brie cheese and-or milk chocolate.

Speaking of Fitz, it will have a new on-site restaurant as of May 1 called 19 Bistro@Fitz, operated by Neil Martens, who also owns 19 Okanagan Grill+Bar at Two Eagles Golf Course in West Kelowna. 19 Bistro@Fitz signature will be pizzas from the brick wood-fired oven.

Home Videos The WORLD of WINE – Wine News. Cheap wine, tasting notes and cooking with wine The World of Wine – May 2021 … END_OF_DOCUMENT_TOKEN_TO_BE_REPLACED

How to visit Napa Valley on a Budget. In this video Carson and I explain a few ways to enjoy Napa on the cheap. Tip and advice about how to visit Napa … END_OF_DOCUMENT_TOKEN_TO_BE_REPLACED

Home Videos Get To Know Argentina Wine | Wine Folly If you love Malbec, Argentina is your ultimate wine region. But that’s not … END_OF_DOCUMENT_TOKEN_TO_BE_REPLACED