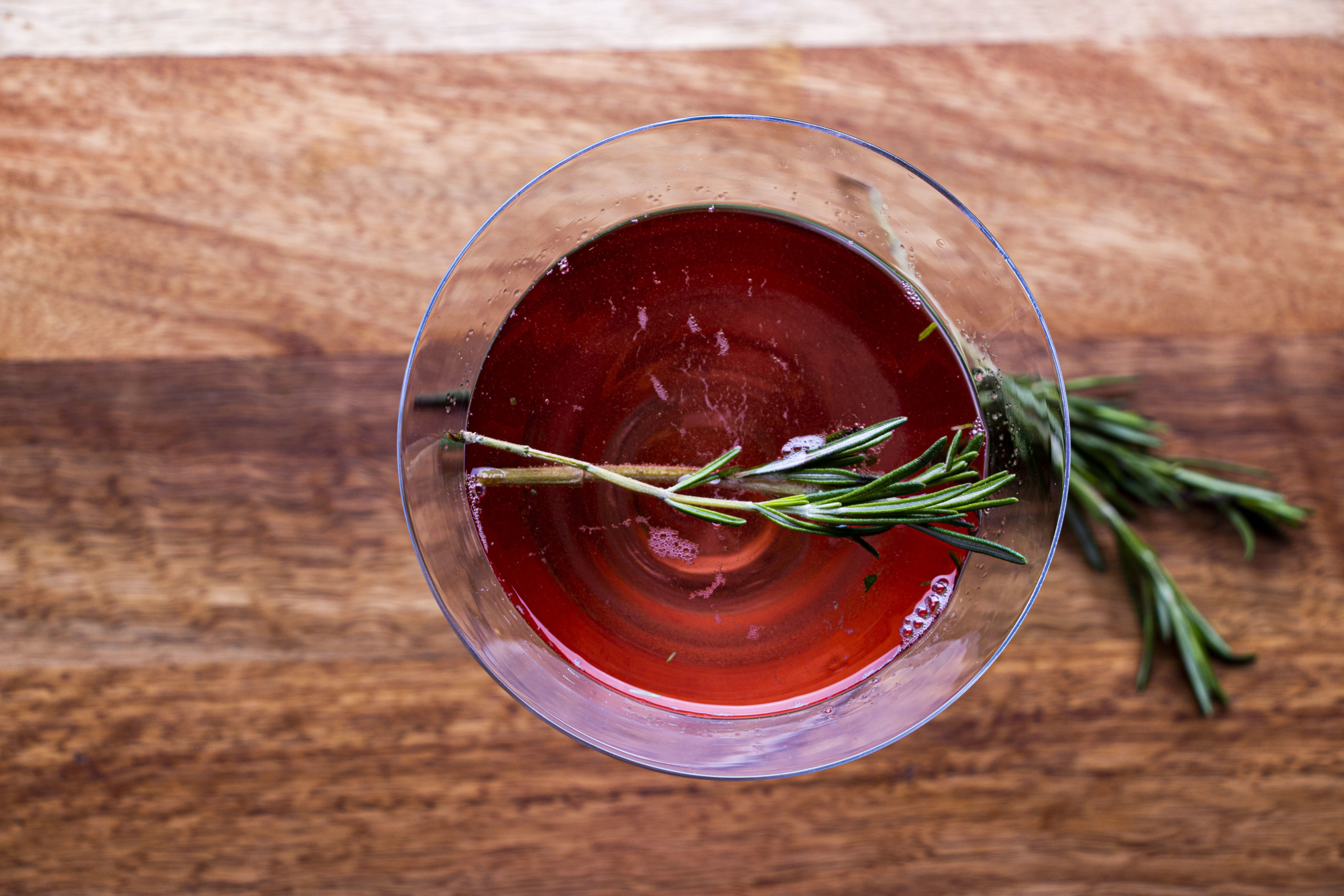 My first non-alcoholic pairing in which sommelier Mario cleverly and carefully contrasted the ingredients with those of the polenta dish. Impressively grown-up drink. (Photo: Amnellsia Photography)

It’s a wide-eye moment when an inventive pairing results in a symbiosis that makes both the food and the drink taste better than they did individually.

When those moments were wine-pairing ones, they were rare but they were almost divine. Then they became non-existent, again, under Adjusted Lockdown Level 3, with wines and spirits no longer allowed to be drunk in or sold by restaurants.

By chance, I’d already mentioned here in TGIFood towards the end of last year that it’d be interesting to experience a non-alcoholic pairing menu over Christmas, mainly to dodge that rather depressing and almost-expected indulgence that’s associated with the season.

I hadn’t then dreamed how relevant such non-alcoholic food pairings would become under 2021’s Covid-19 regulations.

For this experience, I’d known very well where it was I wanted to go. To the place that probably started these non-alcoholic pairings alongside the wine ones, for their inimitable tasting menus, maybe a decade ago. They were so appealing my eyes often slid from the fascinating wine pairing to the non-alcoholic pairing on the menu and wondered. Since then, on other Jozi tasting menus, tea pairings, cocktail pairings, even whisky pairings have made appearances.

This is a favourite table at DW Eleven-13, where the bustle of the semi-open kitchen is visible, the room can be ogled and diners seen entering, departing. I’m falling a little bit further in love with the place, as happens every time here in a group or, like this time, simply alone among the familiar faces. I’m more sensitive to the place’s undercurrent tug of efficiency and energy.

My four-course food choices on the tasting menu to be drinks-matched are ordered. Masked Monalisa Mbewe has brought the “breads”, the pre-first course, among the fresh sourdough and bread branches is potato “glass”, more like veined savoury paper, along with a quenelle, important enough to have its own slate plinth, butter glossy with red pepper chutney. The familiar green pottery disc of a side plate with the restaurant logo stamped right through it makes me smile.

I count three other tables of couples and one of a working trio spaced around this room. This is the height of Gauteng’s second wave pandemic. We are so lucky. And lucky to be here.

Miraculously, the staff are still here too. For the last nine months owner-chef Marthinus has slogged to perform that miracle, working seven astonishingly different food twists in every 24 hours, to save every job, then grafting in soup kitchens to help save others.

“I’ve been determined to keep my staff, to keep the doors open, even figuratively for a while, and to keep relevant.”

“And to keep going,” I wonder, admiring the bright whites of Marthinus Ferreira’s eyes when we catch up later.

My first drink arrives. Monalisa’s eyes are smiling. It’s a debonair looking drink with a rakish rosemary sprig across its rim for my starter of chef Marthinus’ well-known deep-fried polenta that has appeared in many guises over the years, that just has to be tasted to appreciate the creaminess within fine and crisp orbs. Today they’re bedded on spinach puree with burned butter and toasted seeds, his raisin gel, and all mouth-wateringly dusted with fine pieces of one of our loveliest South African cheeses, the Gruyere-like Karoo Crumble from Langbaken near Williston.

Mario Monteiro is the wine director who’s famously been here almost from DW Eleven-13’s very start, seeing to the cellar, training the sommeliers and perfecting his skill of pairing wines and these non-alcoholic drinks with his extraordinary understanding of how food works. This drink has seven subtle ingredients and he points out how even the buttery toasted seeds in the dish (tiny bit of peach essence) and the raisin gel (a little cranberry) are taken into account within this mix of lemon and ground and strained rosemary, “lifted with club soda”.

I taste it on its own and it seems terribly grown up for a non-alcoholic drink. I think I had somehow expected sticky cool drinky tastes. The ground rosemary is very savoury. Then it smacks up the tastes of the spinach and the cheese, creating a clever cohesive experience, which I guess is what this is all about.

I sneak a peek at what the wine might have been were it not for Adjusted Level 3. It would have had sauvignon blanc and semillon in its 2017 blend. Hmm. I drain my glass. I can hardly compare them but this is damn good.

When he comes to tell me about the next drink, I’m much more attentive. This one does have some tea in it, Ronnefeldt fresh orange and vanilla rooibos tea, slightly sweetened with “a hint” of apple juice, the combination “bringing out the macerated grapes and sherry velouté” in the accompanying dish of a delectable quail ballotine on a corn fricassee. I find it also seems to bring out the inherent creaminess of even crisp corn. The drink is called Orange Blossom but tastes quite masculine in its suave complexity.

I’m right into all this non-alcoholic pairing now, fascinated. At palate cleanser time, when a tiny lolly of tart strawberry and strawberry dust is set before me, I watch Marthinus in his chef’s jacket and shorts moving though the room but looking too focused on something else to indulge in chat right then. I hadn’t heard much from him in the kitchen either, except, “Away to table five”, which was not mine. About half an hour later a “Fuck you!” could be heard ringing among the metal kitchenware and then a silence before more usual kitchen clatter.

He does stop to say, on his return route, that the grilled linefish dish I chose as a main course, off the tasting menu, is just-arrived Cape Salmon and that the deliciously olive-oily “stew” that comes with it is a hark to one side of his family’s Portuguese roots. It’s a wow dish with the salmon just cooked but with its crisp skin and the stew part including green olive pieces, tiniest tomatoes and chickpeas flavourful as only those cooked from scratch can ever be.

Mario, interestingly, tells me he has some Portuguese roots too. What he’s called a carrot cosmo is a good looker but an even better taster, of fresh basil, fresh ginger, orange and lemon combined with the heavier texture of some fresh carrot juice. This unlikely-seeming pairing is the one that becomes that sum-of-the-parts success, elevating both delicious halves of it into something unbelievably exciting. It’s my non-alcoholic eye-widener.

On his way out, before I receive my dessert dish and drink, Marthinus stops and we discuss all the Covidy aspects of restaurant work now as well as some good stuff that inevitably rises from what seems so dire.

“You know I’m a food nerd?” I knew. He’d once told me about how he got into it as a child. “I don’t think there’s any waking time I’m not reading, researching, testing food, having new ideas. But now I’m cooking way more than before”, with all those extra food jobs he’s doing, including so-called private cheffing for those who don’t leave their homes. He did a six-course brunch for a family this morning, “I love being so active in the kitchen again. This is my life and I love it like that!”

When my next drink arrives, he mentions, “One day we’ll laugh and maybe cry too about how this all worked out. Oh and I haven’t told you I’m also going to open a wine bar as soon as I can. I think I’ll call it ‘Not Another Damn Wine Bar.’ Tell me what you think of your Belnori dessert!”

He wanders off in his shorts as dapper Mario appears. I sniff the drink and cannot identify anything singular about it. That’s odd because it’s largely grapefruit and fresh granadilla, Mario says, with lime zest, all individually easy to recognise. Of course it is quite sour and not what I’d expect from a dessert pairing.

The dessert is also not what I’d expect. It looks like a settled snow scene from one of those old shake-up toys in glass domes. It’s a white peaked heap of Belnori goats cheese shavings on a charcoal plate.

The tasting menu description alerts me to a smoked meringue, grape chutney and nutty seeds. They have to be buried within. Of course, it’s one of those successions of taste surprises for which Marthinus has made his name. And of course, it’s so good I polish off the lot.

I puzzle over the sourness of the drink until I realise how cunningly it offset the different sweetnesses of goats cheese, smoky meringue, tangy chutney and buttery nuts.

So I’d thought to have an interesting experience as a non-alcoholic food pairing, tasting meal?

It’s been an outright shake-up of my expectations, a grand lesson in mixology sommelier style, without alcohol. The ultimate Extended Lockdown Level 3 bucket lister I’d say, before we automatically drink wine again with fine food. DM/TGIFood

Home Videos The WORLD of WINE – Wine News. Cheap wine, tasting notes and cooking with wine The World of Wine – May 2021 … END_OF_DOCUMENT_TOKEN_TO_BE_REPLACED

How to visit Napa Valley on a Budget. In this video Carson and I explain a few ways to enjoy Napa on the cheap. Tip and advice about how to visit Napa … END_OF_DOCUMENT_TOKEN_TO_BE_REPLACED

Home Videos Get To Know Argentina Wine | Wine Folly If you love Malbec, Argentina is your ultimate wine region. But that’s not … END_OF_DOCUMENT_TOKEN_TO_BE_REPLACED