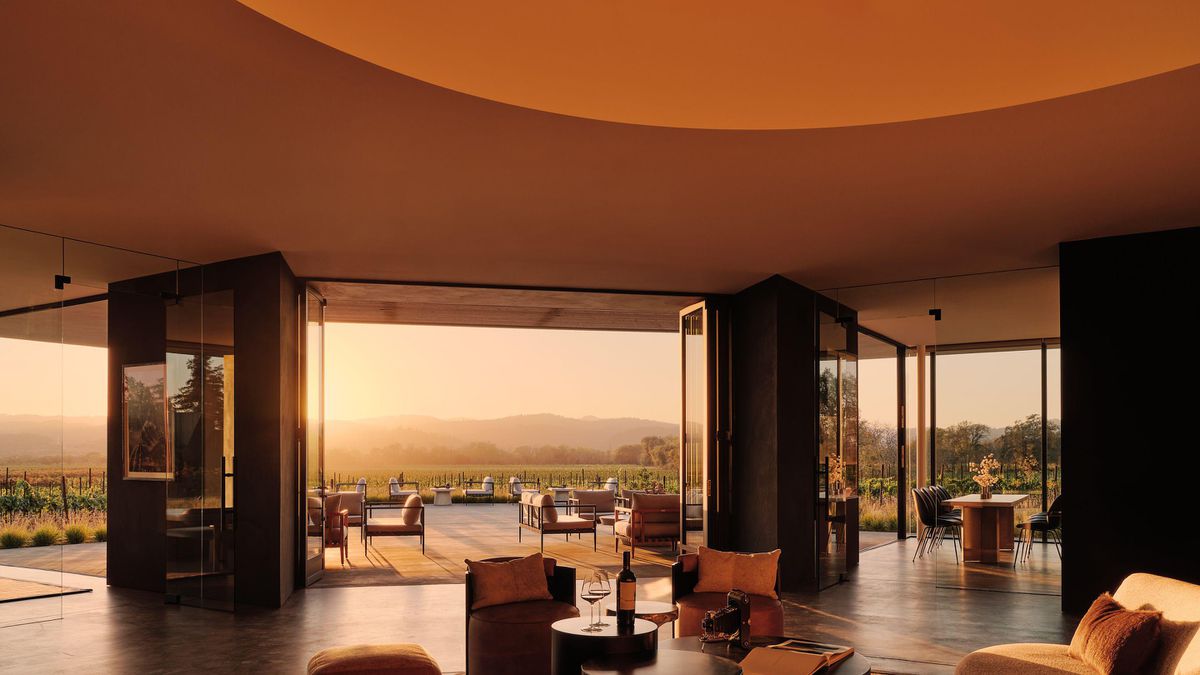 A new winery and hospitality center called Aperture Estate in Sonoma County, California is a stunning architectural and artistic feat in that it is designed around the concept of an aperture of a camera, an opening through which light can travel as well as assists the camera to focus on a particular subject. In the center of their visitor’s center is a three-dimensional aperture shaped skylight that can alter the atmosphere of the room throughout the day as the weather changes from the sun shining bright overhead, bringing a warm glow to the stunning photography of various countries that graces the interior walls or allowing a different dramatic energy when clouds move above the skylight with a moody quality that accents the emotionally charged photos. This remarkable centerpiece expands out into private rooms that give the appearance of being part of the shutters of the aperture while also allow an unobstructed view of the vineyards. Aperture Estate not only represents the realization of a dream that superstar young veteran winemaker Jesse Katz has envisioned but it also represents the experiences he has shared with his father traveling around the world since he was seventeen months old.

Despite only being in his mid 30s, Jesse already has a cult wine called Devil Proof that represents two different bottlings of single vineyard dry farmed Malbec. Yet when one just glances over his experiences from Pétrus in Bordeaux, Screaming Eagle in Napa Valley as well as Bodega Noemia and Viña Cobos in Argentina just to name a few, it becomes apparent why many consider Jesse a young veteran winemaker at such a youthful stage in life. And when he started his own label of wines with Aperture Cellars in 2009 there was always the dream that it would lead to him building his own winery and visitors’ space that would also serve to display his father’s famous photography.

Jesse’s father, Andy Katz, has played an important part in his son’s obsession about every aspect of making wine, as after many years of being a professional photographer for music bands and documenting people and places around the world, he found himself getting into the wine scene. At first Andy just fell in love with drinking wine and then he fell in love with the scenic beauty of different wine regions and then once he started to build friendships with wine producers he was completely hooked; this would lead to him contributing photos to books written by top wine writers such as Robert Parker, James Laube and Jane Anson.

“My father has a contagious laugh that can connect with anyone, no matter their language or country we were in,” said Jesse and he explained it was part of the reason of how his father is able to get such intimate photos from people around the world as well as build deep relationships with winemakers scattered across the globe. Today those deep connections are represented by the clones of Merlot and Sémillon planted at Aperture Estate that were generously given to Jesse by Pétrus and d’Yquem respectively.

Just like how Jesse’s father always tries to find the ideal expression of a person or place in a moment of time, Jesse’s own passion for trying to find the ideal texture, balance and aromatics in a wine rooted in place has been the major driver in his life. He and his father have traveled to over 80 countries together and when they go to a wine region they are always looking for different things; his father often times is looking on how the light imbues a grape bunch with a soul when photographed from a particular angle as opposed to Jesse looking at all the indirect as well as direct factors that make up a wine (micro-climate, soil, vines, position of grapes and various stages of winemaking) to allow him to figure out how a great wine producer unlocked the soul of that wine.

But their two passions, winemaking and photography, became an official partnership when they purchased a 40-acre Sonoma estate with vineyards including old bush vines that were planted back in 1912 with completion of their winery in 2019 and finally the finishing touches of their hospitality space in Spring of 2020. It would be a place where all their shared world travel experiences as father and son that expanded their minds, hearts and souls in famous wine regions and other areas that are more known for a richness of culture merge together in a glorious journey for visitors.

As Jesse overlooked his vineyards and the explosion of mustard flowers starting to bloom between his gnarly, centenarian vines and the newly planted clones from his Bordeaux friends, he expressed, “I love the contrast of some of the oldest vines on the planet to one of the newest state-of-the-art wineries to new baby vines.” His winery is equipped to give every lot of wine all the nuanced love that it needs ranging from some of his French oak barrels having toasted acacia wood on their tops when fermenting and aging their Sauvignon Blanc wine, a tip he learned from the great Bordeaux wine estate Haut-Brion, to implementing automatic pump-overs in his red winemaking, focusing on Bordeaux varieties as well, so there is a precise, gentle extraction of the skins from the red grapes. “The soul of a red wine comes from the skin” exclaimed Jesse and that might explain not only why his wines have a elegantly supple texture but that they are aromatically lifted on the nose while being richly concentrated on the palate as well; a combination that does not always go hand in hand when it comes to red Bordeaux blends.

Being One of the Lucky Ones

Like so many others, Jesse’s life was turned upside down when the pandemic hit as he had taken the leap with his father to take on a huge amount of debt, placing over a decade of his life into the idea of Aperture while balancing other winemaking jobs that would accumulate into the grand opening of Aperture Estate that was meticulously designed, after Jesse thoroughly interviewed ten architects, that was ultimately delayed and became a lesser event last Summer. Then there were the on and off shutdowns, the limited seating of visitors in outdoor spaces that thankfully in his case could bring in the addition of some of his private tasting rooms that have removable walls and hence allows for enough airflow.

As Jesse looked out onto his vineyards of old and baby vines with the Russian River Valley visible beyond the tree line, he noted that things are not what he envisioned when it comes to giving people the experience that he hoped with the aperture skylight room, filled with photos of his travels with his father, off-limits because of coronavirus restrictions but he is working hard to create a safe environment with all his employees vaccinated and the seating areas properly distanced.

A black and white photo in one of the open-air private rooms suddenly grabbed his attention, “I met that guy in India with my father when he took this photo,” Jesse reminisced and he continued, “and he runs one of the world’s largest human-powered laundromats in Mumbai.” Last year was the first year since Jesse was seventeen months old that he hasn’t traveled with his father.

The man from Mumbai had worn rough hands that showed a life of difficult manual labor while the smoke from the cigarette he smoked floated around him as he took his moment to fully take in something that gave him joy. One of the gifts of traveling to various pockets around the world is the concept that being one of the lucky ones is a relative idea and differs for everyone; many people in unimaginable circumstances can find a way to feel gratitude for the simplest things in life… they do so because if they don’t it is easy to just give up.

Even with all the shock, disappointment and living with the constant unknowing of when his hospitality spaces would open, or be closed down again, Jesse feels pretty lucky considering what so many others have gone through. And in a way he appreciates how important the space that he created with his father can be for others who are suffering from too much isolation and stressful, heart-wrenching news. Despite not being able to travel for the first time in his life, Jesse can still share those precious memories that are vividly represented by compelling imagery on the walls while sharing his dream of his special property and the wines he always wanted to make; creating a haven that even during the darkest times helps one to remember how much joy and human connection that is waiting out there… reminds one that she is one of the lucky ones because she gets one more moment to know how beautiful life is.

2019 Aperture, Sauvignon Blanc, Sonoma County, California: 96% Sauvignon Blanc and 4% Sémillon. Beautiful white flowers with zesty citrus peel and juicy peach flavors that had a rich body balanced by mouthwatering acidity and a nice tension that finished with a smoky minerality.

2018 Aperture, Cabernet Sauvignon, Alexander Valley, Sonoma County, California: 86% Cabernet Sauvignon, 7% Malbec, 5% Merlot and 2% Petit Verdot. Aromatically stunning nose with lavender and smoldering earth that has fine tannins that give an elegant shape to the wine with ripe blueberries and blackberries on the palate with hints of cigar box on the persistently expressive finish.

Home Videos The WORLD of WINE – Wine News. Cheap wine, tasting notes and cooking with wine The World of Wine – May 2021 … END_OF_DOCUMENT_TOKEN_TO_BE_REPLACED

How to visit Napa Valley on a Budget. In this video Carson and I explain a few ways to enjoy Napa on the cheap. Tip and advice about how to visit Napa … END_OF_DOCUMENT_TOKEN_TO_BE_REPLACED

Home Videos Get To Know Argentina Wine | Wine Folly If you love Malbec, Argentina is your ultimate wine region. But that’s not … END_OF_DOCUMENT_TOKEN_TO_BE_REPLACED