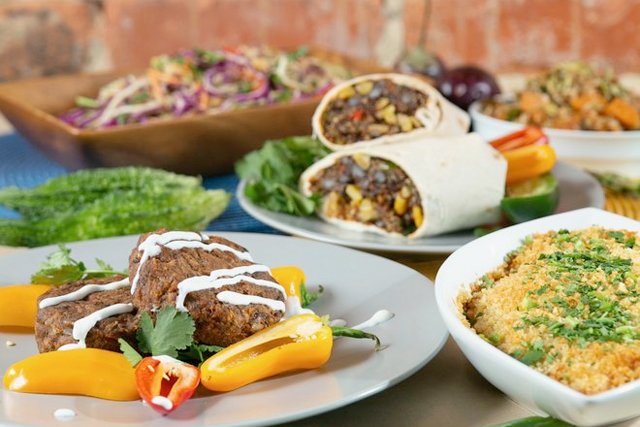 “People kept asking, ‘Where can we come and get this throughout the week?’ ” chef Mela Jones says of her ready-made meals.

The Scotland native, 56, best known for selling online and at local farmers markets under the name Truly Scrumptious, is set to give the people what they want. Rebranding the company, this spring Jones will debut Leek & Thistle — a nod to her Welsh heritage and Scottish roots — offering a range of frozen, ready-to-heat meals along with a market area dedicated to wine, provisions, and other grab-and-go items in the former Nota Bene space at 2112 E. Main St.

“It got to the point I didn’t have enough freezer space,” she says of her expanding business. “I currently take 40 coolers to the farmers market, every variety of thing I offer, and so I sort of got the confidence that we could make [a storefront] work.”

For Jones, the path to this moment has been a winding one of worldly travels and culinary experiences, decades of bustling kitchens and fast-paced work environments — cooking constantly along the way.

“I always loved food, I was always cooking for everyone, and now when I look back I didn’t even realize,” she says. “It makes me laugh now — even in college, we’d be studying for an exam, and I would make an almond-chocolate cake for my friends.”

After coming to the U.S. as an exchange student in college, Jones spent winters working in hospitality in Vail, Colorado, and summers in Martha’s Vineyard in Massachusetts, where she first landed in the kitchen.

“I mostly worked with chefs who have gone on to be nationally known and very successful,” Jones says. “I was exposed to high-quality, cutting-edge cuisine and fell in love with the whole thing.”

From there, her resume would include stints as a live-in cook for a family in Australia; a high-profile catering job for sporting events including Wimbledon and the Ryder Cup and a staff party for Great Britain’s Princess Diana and Prince Charles. She also spent months backpacking through Thailand and Vietnam, then lived in Fiji and New Zealand, absorbing all the flavors and inspiration as she went.

“I’m very, very fortunate,” she says. “I feel like I’m a really lucky person and have gone to a lot of great countries and always met great people.”

After meeting her husband, a Virginia native, the duo landed in Richmond. At home with their children, Jones launched Truly Scrumptious, primarily a catering company, in 2007. Over the past decade, the business grew steadily. After becoming a member of Fall Line Farms & Local Roots, Jones says she felt compelled to showcase local produce and reach a wider audience. In 2017, she became a vendor at St. Stephen’s Farmers Market, offering ready-made meals using local ingredients.

“That was really the changing moment; that was huge,” Jones says. “Never in my wildest dreams did I think I would have the customer base I do there. It didn’t take very long before people weren’t buying one or two [items], they were coming to buy five or six.”

The momentum continued, and Jones found herself in need of a larger production space.

Last March she looked at her first potential brick-and-mortar space — and one week later, the pandemic hit. As she continued searching, Nota Bene, the 5-year-old Shockoe Bottom restaurant from owner Victoria Deroche, closed its doors and went on the market in December. Jones reached out and soon after purchased the building.

She says she’s excited to grow her vegan and vegetarian line of meals and offer a variety of entertainment-style dinner packages that will include an appetizer, entree, salad and dessert, with an option for wine add-ons. Standard menu items will range from chicken and mushroom cottage pie and Greek-spiced chicken with eggplant to Moroccan chickpea stew, black bean burritos, soups and more.

“I love food that has a lot of flavor and spice; I incorporate lots of flavor into everyday eating,” Jones says. “I like to say that because I like to make food that may be different from what most people may associate with [the UK].”

When Leek & Thistle opens, customers will be able to preorder meals online or visit the market and chose from daily offerings. Along with frozen meals, Jones says, they will sell grab-and-go bites, various sandwiches, salad mixes from area farms, and other local products and provisions. The inside will not be open for dine-in service.

In the future, Jones hopes to use the wood-fired oven in the space, to make roasted vegetables and entrees such as lasagna, and add breakfast or brunch items to the menu. When it’s safe to do so, she plans to host wine tastings and seminars, and offer food- and wine-pairing events.

“I really am so excited about this,” Jones says. “I like to say, people can be in their PJs and eating good food, you don’t have to think about going out to get it — they’re getting home-cooked food, and it frees up their time.”

Leek & Thistle will be open Tuesday through Saturday from 11 a.m. to 7 p.m.

Home Videos The WORLD of WINE – Wine News. Cheap wine, tasting notes and cooking with wine The World of Wine – May 2021 … END_OF_DOCUMENT_TOKEN_TO_BE_REPLACED

How to visit Napa Valley on a Budget. In this video Carson and I explain a few ways to enjoy Napa on the cheap. Tip and advice about how to visit Napa … END_OF_DOCUMENT_TOKEN_TO_BE_REPLACED

Home Videos Get To Know Argentina Wine | Wine Folly If you love Malbec, Argentina is your ultimate wine region. But that’s not … END_OF_DOCUMENT_TOKEN_TO_BE_REPLACED