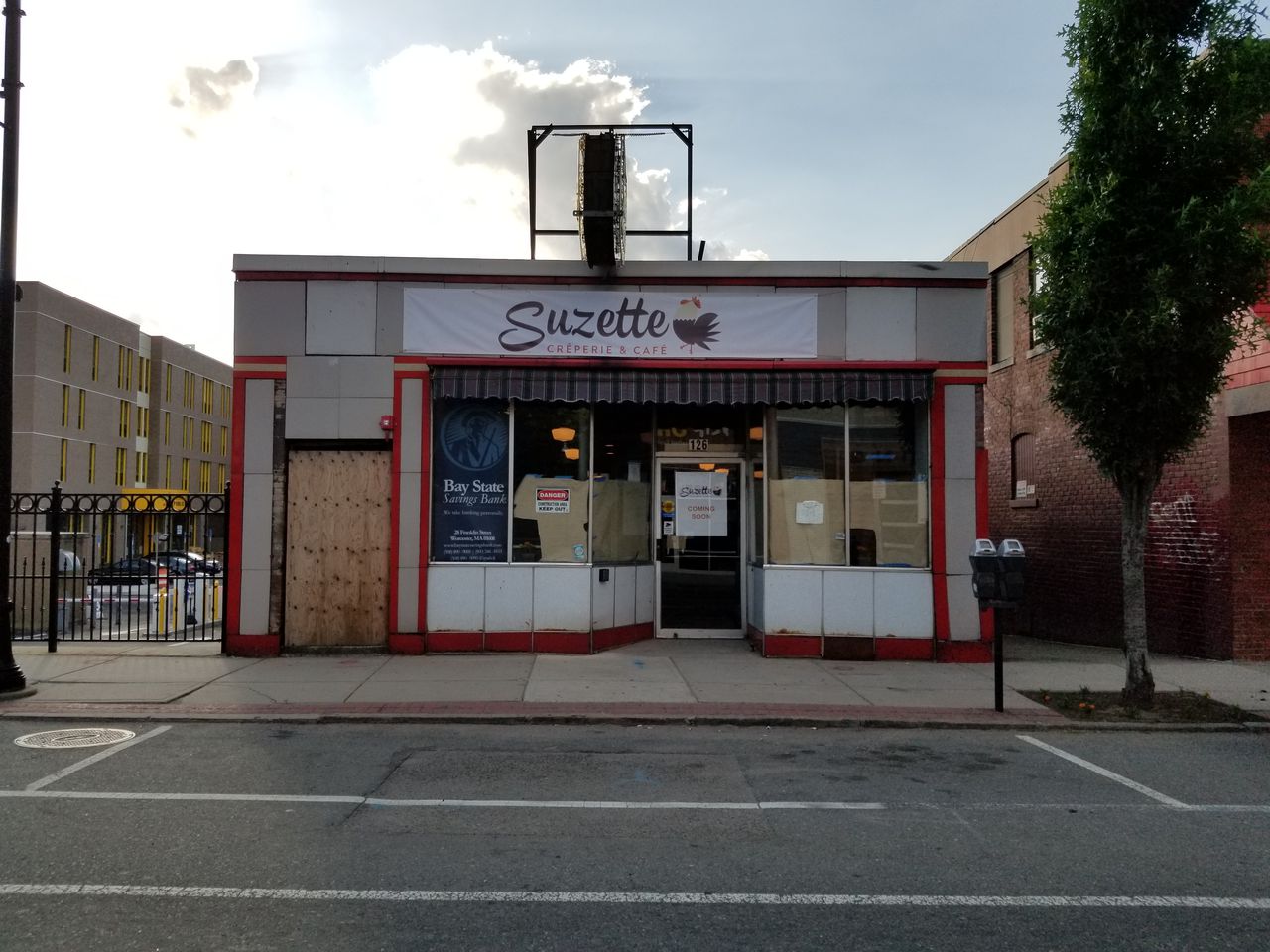 There are various checkpoints when looking back at the COVID-19 pandemic: February 2020 marked the first confirmed case in Massachusetts; on March 10, Gov. Charlie Baker declared a state of emergency.

But for many, the pandemic became real on Tuesday, March 24, 2020. That’s when Baker had ordered all non-essential businesses in the state to shut down. Just a week before, two days before St. Patrick’s Day, Baker closed schools, restricted restaurants to takeout and delivery and limited gatherings to no more than 25 people.

A year later, a vaccine has arrived and on Monday, Massachusetts advanced to Phase 4 of the state’s reopening plan. Yet, a “new normal” is still not quite here. Many businesses that were open a year ago are now closed for good. About 4,000 restaurants have closed over the last 365 days, according to the Massachusetts Restaurant Association.

The businesses that remained open endured a year unlike any other. Some even debuted during the pandemic. Regardless of a business’s tenure within a community, it required innovation and creativity to survive and many delivered.

Some of the ideas acted as stopgap measures to sustain operations for a couple of days or several weeks. Other innovations will remain in place moving forward even when masks and social distancing disappear. Through the hardships and struggles, the pandemic spawned new normals that businesses plan to incorporate for the years ahead. 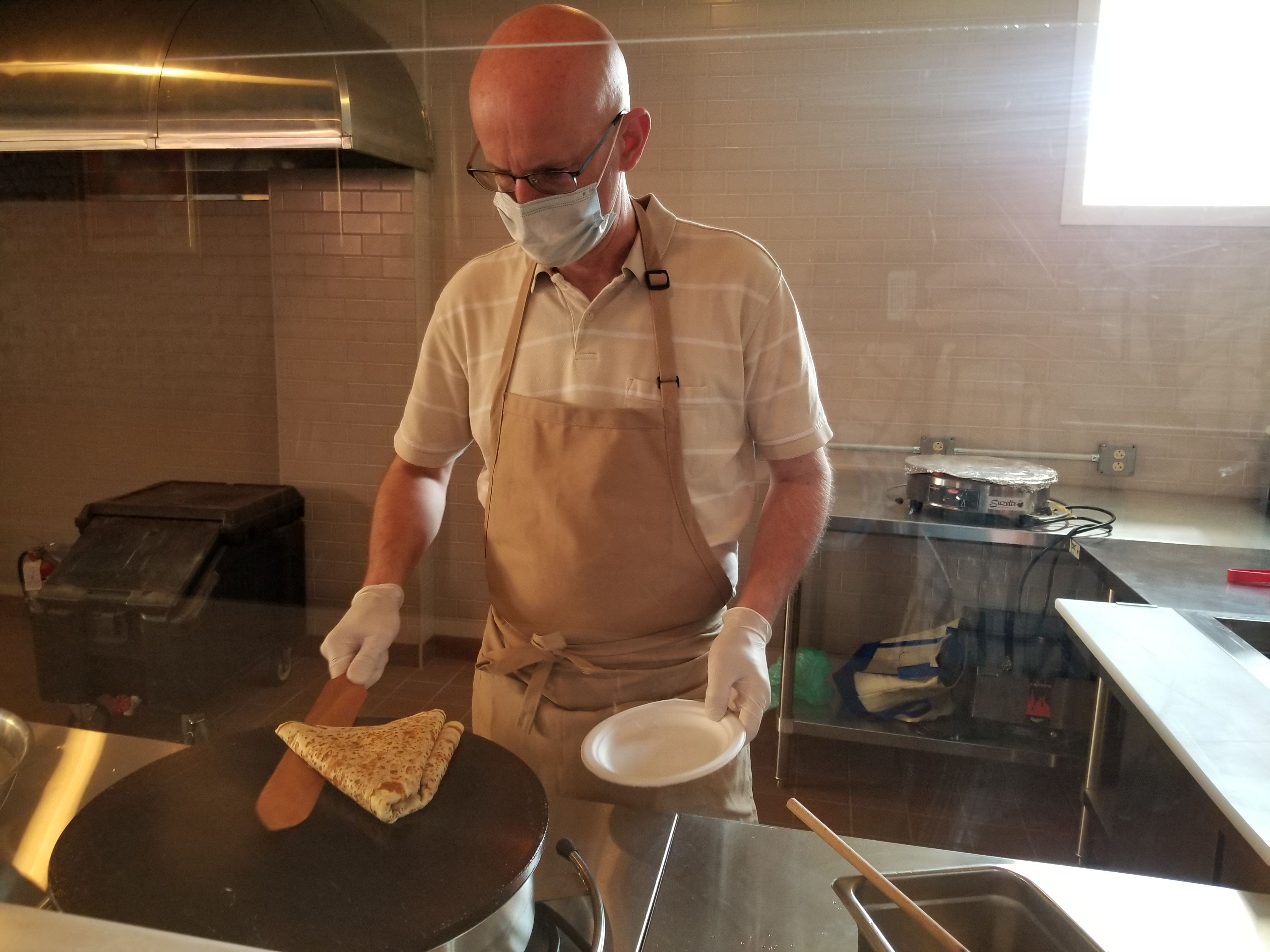 Suzuette Creperie & Cafe is set to open in Worcester’s Canal District. Chef Jean Luc Wittner is hopeful it can open to the public in the coming weeks. (Michael Bonner) Michael Bonner

For two years Jean-Luc Wittner searched in Boston for a space to open a creperie. Creps are more than a passion for Wittner.

As a child in France, Wittner and his brothers would spend free time competing to see who could flip the best crepe.

In 2019, Wittner and his wife, Evelyn Darling shifted their focus to Worcester, specifically, the Canal District, which represented a hotbed for business growth.

Soon, Wittner and Darling found a spot, the building that once housed Weintraub’s Jewish Delicatessen on Water Street for almost a century.

“One positive impact of the pandemic has been the need to be creative and try new things. It forced us to adapt quickly and creatively, and we’ve been successful at doing this.”

Suzette Creperie & Café was set to open in early 2020, until the pandemic struck. Construction on the building stopped in March. The restaurant was delayed about two months and eventually opened in March.

“One positive impact of the pandemic has been the need to be creative and try new things, Wittner said. ” It forced us to adapt quickly and creatively, and we’ve been successful at doing this.”

To survive, Wittner cut staff hours by about 50% while he worked extra to make up the lost time. Costs also skyrocketed in terms of PPE and some supplies like buckwheat, to-go containers and bags were difficult to find.

Beyond slashing staff hours, which many restaurants were forced to do, Wittner also pivoted from his original business model. Suzette Creperie & Café introduced French macarons and pre-packaged meals. The macaroons, Wittner said, sold better than expected.

A year ago, small businesses understood the importance of their digital footprint. The long hours associated with operating a business often forced many to move at a snail’s pace in developing an online presence. In-person customers and service took priority.

The pandemic shifted small businesses into hyperspeed when it came to online services.

The innovation extended beyond restaurants. The Blue Marble in Northampton found the only positive through the pandemic was the time allotted to integrate a digital system.

“The only positive impact that this year has had on The Blue Marble is that it has forced us to build our long-overdue website,” said Cathie Walz, owner of the gift shop The Blue Marble in Northampton. “We are adding to the site on a daily basis and have thousands of items available for folks to shop from home.”

Small shops that were shut down due to the governor closing non-essential businesses could conduct sales online and ship the items or offer curbside pickup.

Restaurants followed a similar path as customers ordered online with many restaurants installing curbside pickup. A routine emerged as patrons popped their trunks after arriving at a restaurant. Staff placed the food in the back, closed the trunk and the transaction was complete without ever coming into contact with anyone.

Ordering online became just as routine as sitting in front of a computer screen for something as simple as hanging out with friends or as complex as visiting a doctor.

Riser+Tread, which offers youth therapy and mental coaching in Newton Upper Falls, Lexington and Concord, previously only used virtual meetings to work with college students away from home.

“The pandemic has created a context in which people of all ages have adapted to Zoom use, and that is here to stay,” Jotham Busfield of Riser+Tread said. “While we always prefer in-person sessions and think in-person therapy is more effective than Zoom therapy, having ubiquitous zoom use is a great thing. It provides greater access to care and can still serve as a backup plan when transportation, weather, or any other unexpected situations arise”

The success through Zoom therapy sparked other ideas within Riser+Tread, especially for younger children who often spent hours sitting in virtual classrooms each day. 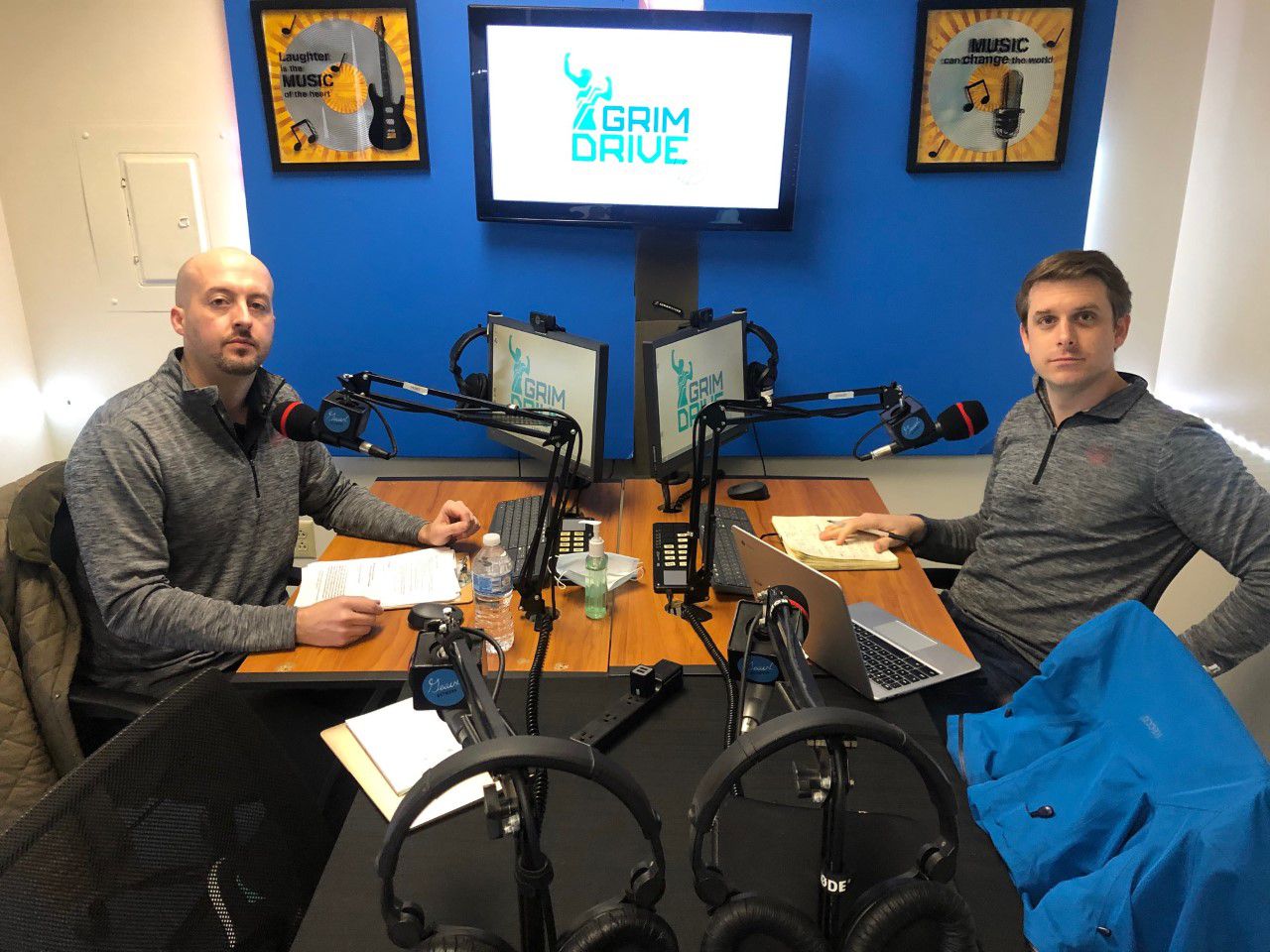 Riser+Tread introduced YouTube videos that offered parents information on video game use, sleep hygiene and how to encourage young men to reach out for help when they are struggling.

The YouTube videos evolved into a weekly podcast that speaks about mental health through the lens of pro sports and athletes.

“The pandemic forced us to get creative, tap into and commit to the things we are great at, and take some chances,” Busfield said. “It forced us to think outside the box and this has led to growth as a company we likely would not have seen otherwise.”

Some restaurants also expanded into digital formats to replicate the dine-at-home experience.

The Mill 185 in West Boylston and Reunion Tap and Tavern in Grafton partnered to hire musicians to perform from their home via Facebook Live. It provided a way for customers to eat takeout but experience live music as they would in a restaurant.

There are some holes the digital realm can’t fill.

Performance venues like the Hanover Theatre and Mechanics Hall offered digital performances throughout the pandemic, but like the wine-tasting dinners or Facebook Live music, they didn’t entirely replicate the atmosphere.

“Engaging people digitally around the performances that we do in the theater is important. It will help. I think they will get more out of the things they come to the theater to see,” Hanover Theatre President and CEO Troy Siebels said during a webinar called Worcester Emerging. “That said, I believe very strongly in the benefits of live performing arts. I think there’s nothing that replaces being in a room with the performer on stage and being able to respond in real time.”

The sentiment rang true for Lindsay Pope, who operates Yoga Sanctuary in Northampton. Like gyms and fitness centers across the state Yoga Sanctuary was closed under Baker’s guidance.

Pope pivoted to livestream classes and offered a recorded class library, which will continue even after the pandemic. However, Pope said about half of her clients weren’t interested in the virtual classes.

“The sudden change was confusing for people, and did not give us any advantages,” Pope said.

Much of the innovation and new concepts for large arenas will debut in the summer and fall when the facilities reopen.

Siebels envisions – much like takeout during the pandemic – a contactless concessions operation at the Hanover Theatre. The organization also debuted the Brickbox Theater with smaller audiences.

At the DCU Center, the Worcester Railers are tinkering with methods that promote fan experiences. Traditions like pregame high-fives with players will be substituted with alternate methods of fan interaction. Stephanie Ramey, president of the Railers, suggested noisemakers or video board interactions.

“What I think we’re going to see is a season that mirrors year one enthusiasm if not exceeds that,” Ramey said on Worcester Emerging, a web series sponsored by Worcester Business Journal and State House News Service. “The Railers will be a place that will not only celebrate Worcester’s hockey team in October, but also celebrate navigating through these really crazy times.”

Arenas represent the final steps of coming out of the pandemic. Outdoor dining represented the first steps. Last June, sidewalks around the state became occupied with more tables and cuisines than people.

“It created kind of a nice atmosphere, honestly, in the city and different neighborhoods,” Worcester City Manager Edward Augsutus Jr. said. “We’re pretty much interested in bringing that back online as soon as the weather permits. That’s definitely something that I think is going to be here to stay.”

Expanded outdoor seating, like so many innovations implemented during the pandemic, arrived out of necessity.

Without them, many businesses may not have survived the year filled with unprecedented restrictions.

For Natalie Rodriguez, owner of Nuestra in Worcester, she’s only known the business world under COVID restrictions.

Nuestra opened in January of 2020, which means her business wasn’t eligible for Paycheck Protection Program loans.

Through a second job, as a financial advisor, and creative daily specials, Rodriguez and Nuestra survived the first year of the pandemic.

Like Rodriguez many of the businesses that MassLive spoke with wouldn’t change much in how they responded to the pandemic.

With three vaccines already authorized for emergency use and potentially more on the way, this March represented a possible finish line – rather than the starting point – for businesses.

Much of the optimism is built on the past 365 days.

“The fact that we’ve been able to survive a full year in a pandemic being brand new speaks for itself,” Rodriguez said. “We survived, essentially.”

Home Videos The WORLD of WINE – Wine News. Cheap wine, tasting notes and cooking with wine The World of Wine – May 2021 … END_OF_DOCUMENT_TOKEN_TO_BE_REPLACED

How to visit Napa Valley on a Budget. In this video Carson and I explain a few ways to enjoy Napa on the cheap. Tip and advice about how to visit Napa … END_OF_DOCUMENT_TOKEN_TO_BE_REPLACED

Home Videos Get To Know Argentina Wine | Wine Folly If you love Malbec, Argentina is your ultimate wine region. But that’s not … END_OF_DOCUMENT_TOKEN_TO_BE_REPLACED