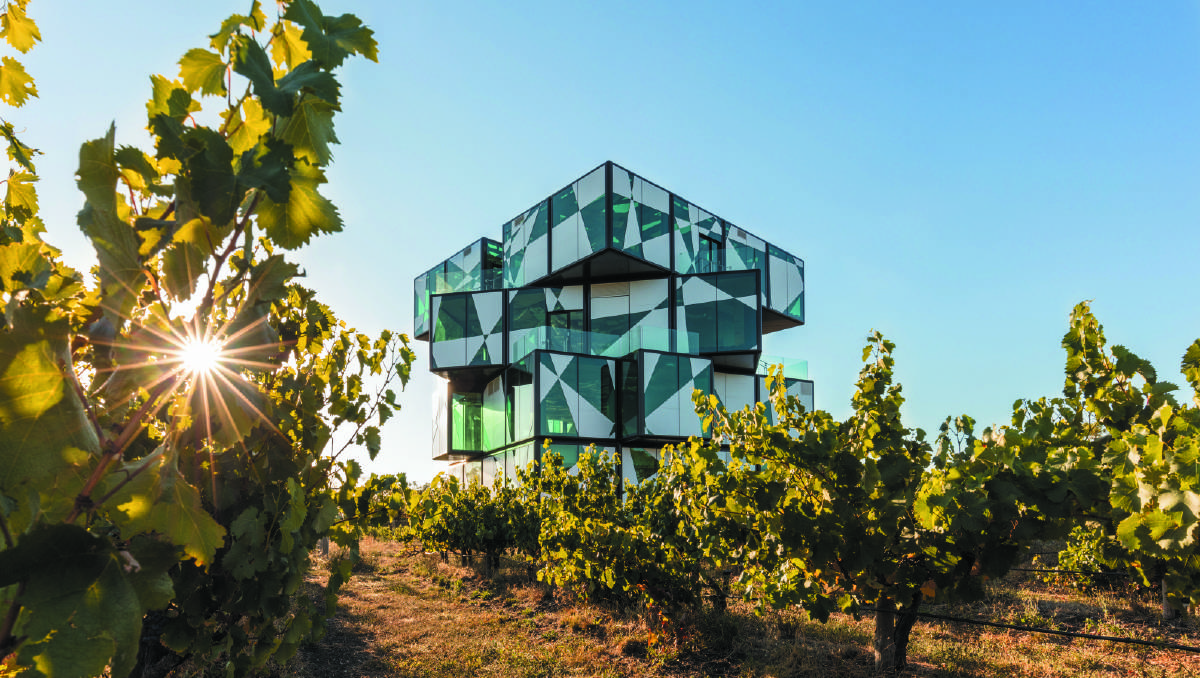 South Australia is one of the Great Wine Capitals of the world. The capital city of Adelaide is the gateway to all 18 of the state’s wine regions, and you can begin your exploration just by heading north, east or south.

In the Adelaide Hills, you will taste the fruity sauvignon blancs; in the Barossa, you’ll visit fine wineries such as Yalumba or Seppeltsfield; and on the Fleurieu Peninsula, you’ll be wowed by the inspired d’Arenberg Cube in the heart of the McLaren Vale wine region.

For those looking beyond the wineries, South Australia’s magical natural attractions, from the outback to the sea, offer something for every type of explorer.

The Eyre Peninsula is a short flight away and is known for its aquatic adventures and activities, as well as lovely seafood, including Coffin Bay oysters.

While we can’t venture abroad on a seabound cruise, we can traverse the Murray River on a traditional paddlewheeler.

Here are some of the highlights to include on your tour around South Australia. Fast becoming a culinary centre, Adelaide has numerous award-winning restaurants and bars. One of the best known is Africola, the brainchild of Duncan Welgemoed. The Johannesburg-born chef combines the best of local produce with a bold taste of Africa, from the chicken-skin sandwiches to the woodfired cauliflower.

The humble pizza is elevated at Madre where the combination of tipo 00 and wholegrain flours with a touch of seawater and a bit of magic is the secret to Adelaide’s best Neapolitan-style pizza. Foodies should also join a tour of Adelaide Central Market.

In the laneways of the city, seek out a quirky speakeasy bar for a memorable night out. Watering holes abound, such as the Pink Moon Saloon, a cosy bar retreat where the bartenders make seasonal cocktails and serve local craft beer.

The capital is also blessed with sprawling white sandy beaches. Just a 20-minute tram ride from the centre of the city, Glenelg is the locals’ favourite. Here, the Moseley Beach Club is the spot to kick off your shoes and enjoy a sundowner with your toes in the sand.

Spend a few nights in Adelaide, and you’ll find it’s the perfect start for your adventures further afield. Just a 20-minute drive from the capital, you’ll reach the Adelaide Hills wine region. Wind your way along the leafy lanes, stopping in the sunbathed towns of Aldgate, Oakbank and Birdwood to meet the locals.

Because of the Adelaide Hills’ cool climate, the sauvignon blancs, with their lovely fruitiness and high natural acidity, are outstanding.

and koalas. There is also a dedicated butterfly experience: a 10-minute visit inside the butterfly enclosure with the invertebrate keeper.

Considered one of the most critically acclaimed wine regions in Australia, the Barossa Valley is home to over 80 cellar doors. Here, you’ll find some of the oldest viticulture in the country and the region centres around the towns of Tanunda, Angaston and Nuriootpa.

The Barossa Valley is less than an hour’s drive from Adelaide but there are some lovely accommodation options, such as the Barossa Shiraz Estate in Lyndoch, to tempt you to stay in the area.

One of Australia’s most loved cooks, Maggie Beer, has created a collection of culinary treats using local Barossa produce. Schedule your road trip for a stop at her Farmshop in Nuriootpa. There are small meals and food tastings as well as limited-edition goodies and cooking demonstrations. Heading to the coast, the triangular Eyre Peninsula is bounded by the Spencer Gulf and the Great Australian Bight. The rich nutrient-filled waters off the peninsula make it one of the best locations to see marine wildlife.

It is also the only place in Australia to cage-dive with Great White Sharks. If that’s too much of an adrenaline rush, book a tour to see whales and their calves frolic under the wave-ravaged cliffs. Or perhaps, swim with the sea lions off Port Lincoln.

The peninsula is also famous for its seafood; you can pluck oysters straight from the sea in Ceduna and Coffin Bay. Many of the local restaurants serve abalone, prawns, rock lobster and countless types of fish.

McLaren Vale is known for its sustainable wine production and sumptuous dining options. Just 40 minutes’ drive south of Adelaide, one of the most striking sights is the d’Arenberg Cube. Set among the hills of McLaren Vale, the architectural work has become a beacon of the wine region and boasts bars, a casual dining restaurant, a museum and art gallery.

Another must-visit is boutique winery Down the Rabbit Hole. The charming vineyard hosts wine-tastings in a vintage double-decker bus in the garden.

The seemingly endless coastline has lovely beaches fringed by rolling hills. There are some great picnic spots: try Aldinga Beach, a 45-minute drive from Adelaide. Pick up some picnic supplies at Willunga Farmers Market on your way.

Just a five-hour drive north of Adelaide, the scenery starts to look like a film set from Mad Max. With red stretching as far as the eye can see, one of the most magnificent natural wonders is Wilpena Pound.

The natural amphitheatre covers nearly 8000 hectares. It is a huge flat plain, covered in scrub and trees, surrounded by jagged hills which form a ring, rising from the ground.

Follow the region’s Aboriginal Dreaming Trail which visits some of the most remote corners of South Australia. Kati Thanda-Lake Eyre National Park is a special place, particularly for the Arabana and Dieri people. As Australia’s largest salt lake, although usually dry, it occasionally fills up, attracting thousands of waterbirds. The lake plays a central role in stories and songs of the Indigenous people. Take a scenic flight to see the beauty of the park from the air. Like Lazarus rising from the ashes, so has Kangaroo Island since the bushfires of 2019/20. The island’s raw and rugged coastline and crystal-clear waters make it a nature’s playground.

There is breathtaking scenery on Kangaroo Island and it’s best seen on a trek to one of the signature landmarks, such as the Remarkable Rocks. These giant granite boulders in Flinders Chase National Park are shaped by 500 million years of rain, wind and pounding waves.

Opt for the quiet backroads to see native wildlife, especially kangaroos bounding across the grass plains, and stop in at the friendly locals’ pubs.

The food scene on this laid-back island is as robust as the fine dining you might find in the city and the produce is as fresh as you can get. And like the seafood from other parts of SA, the fruits of the seas around Kangaroo Island are to be marvelled at. Devour oysters, marron, abalone and King George whiting at the American River Oyster Farm Shop and wash it down with some of the local Kangaroo Island Spirits, makers of the 2019 world’s best contemporary gin.

Getting to Kangaroo Island is easy – travel on the SeaLink ferry from Cape Jervis (about a two-hour drive from the city) or fly with QantasLink from Adelaide.

For adventurers, the Limestone Coast boasts spectacular natural wonders. In the heart of Mount Gambier, the Blue Lake is formed from an extinct volcano crater. Early in November, the lake’s sombre blue mysteriously changes to an intense deep turquoise. While you can’t swim, there is a lovely lakeside walking track.

There are several options for a snorkel or dive, including the Umpherston and Kilsby sinkholes or Piccaninnie Ponds.

Gourmet food and wine lovers aren’t left out, though. The Limestone Coast is home to over 40 cellar doors, many of which are steeped in history. A culinary highlight is dining on delicious beef at The Tasting Room on Mayura Station. Enjoy an interactive and informative meal at the Chef’s Table as he prepares prime cuts of wagyu. Flowing 2500 kilometres from the Snowy Mountains in New South Wales to the Lakes and Coorong in South Australia, the Murray River embodies the beauty of Australia and boasts a wealth of native plants and wildlife, including the mighty Murray cod.

Visit Monarto Safari Park, the largest safari park outside of Africa. On the Lions 360 experience you see the big cats from an enclosure in the heart of the lions’ den.

Speed up the pace on your road trip at the Bend Motorsport Park, a state-of-the-art motorsport facility and the perfect pitstop on the Mighty Murray Way drive. Or dial it down to a leisurely pace on board a paddlesteamer cruise on the river.

Home Videos The WORLD of WINE – Wine News. Cheap wine, tasting notes and cooking with wine The World of Wine – May 2021 … END_OF_DOCUMENT_TOKEN_TO_BE_REPLACED

How to visit Napa Valley on a Budget. In this video Carson and I explain a few ways to enjoy Napa on the cheap. Tip and advice about how to visit Napa … END_OF_DOCUMENT_TOKEN_TO_BE_REPLACED

Home Videos Get To Know Argentina Wine | Wine Folly If you love Malbec, Argentina is your ultimate wine region. But that’s not … END_OF_DOCUMENT_TOKEN_TO_BE_REPLACED