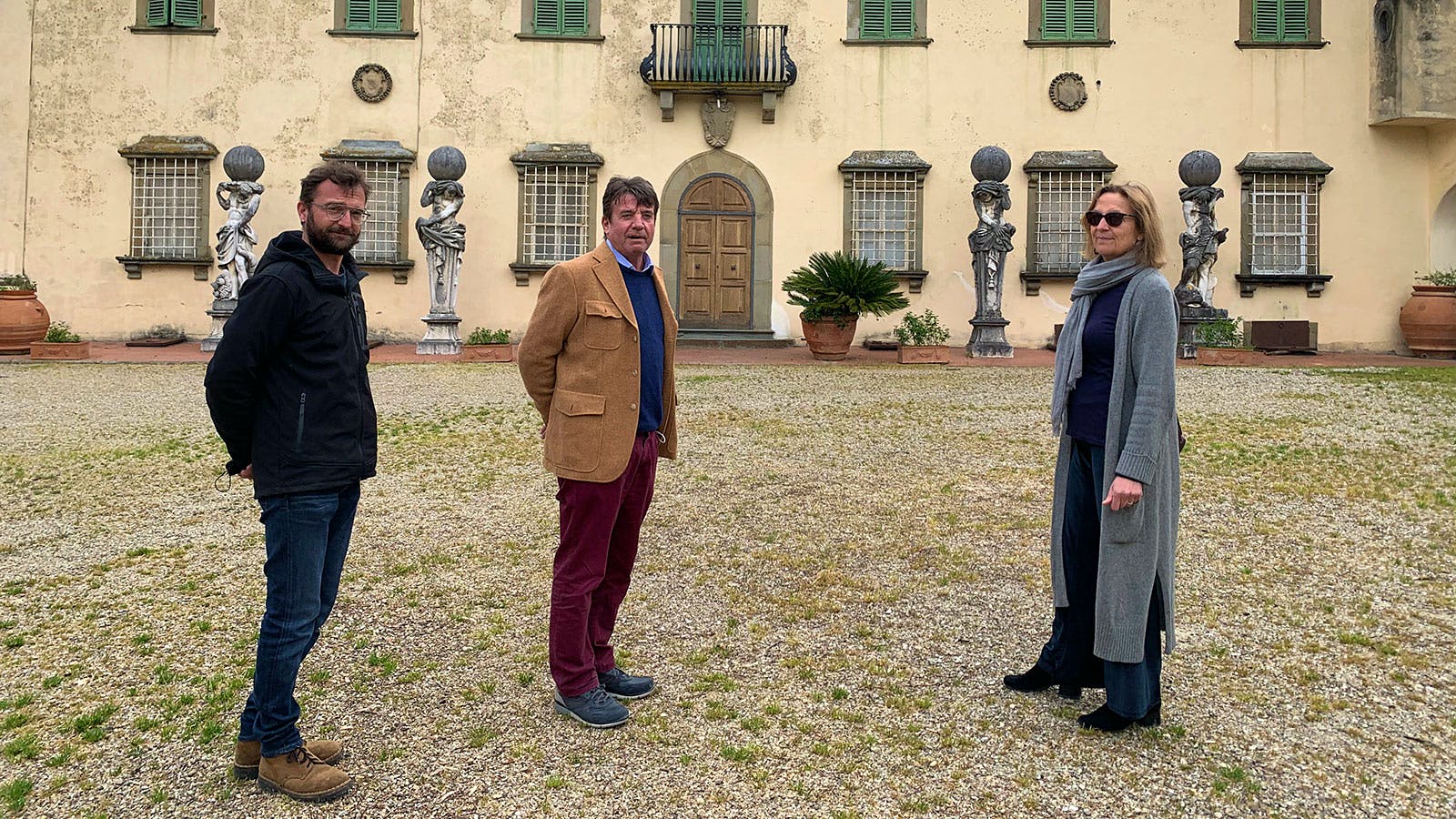 Just before Italy reopened last month, I did the logical thing and hopped in the car and drove to Tuscany.

The countrysides were empty of tourists, frigid and in full bloom. Restaurants were still shuttered, but wildlife—songbirds, deer, pheasants, foxes and more—was abundant.

My first stop was in the northern end of the region, just 15 miles west of Florence, in one of Tuscany’s oldest and least-known wine areas.

Carmignano, in spite of a long history and a name that rolls off the tongue, remains an obscure outpost with only a dozen producers making red wines from about 500 acres of vineyards. It lays claim to being Italy’s smallest DOCG.

The wines themselves are defined by an easy elegance that comes from blending Sangiovese, and sometimes other Tuscan varieties, with Cabernet Sauvignon and, to a lesser extent, Cabernet Franc.

Now this is the quirky thing with Carmignano: Winemakers here have been blending Cabernet into the wines since the Renaissance days of Tuscany’s ruling Medici family, which imported Bordeaux varieties long before they became fashionable in the 20th century.

“Our wine was the father of the super Tuscans,” says Filippo Contini Bonacossi, 57, who leads historic Capezzana, Carmignano’s leading estate. “We were blending Cabernet four centuries before.”

Capezzana is the picture of old Tuscany. It was once a farming village with stables, cellars, homes and a 13th-century chapel. Its drafty 15th-century noble palazzo, with views over the rolling countryside and the Florence-Prato plain, wears the patina of time. The large Contini Bonacossi family—five of whom now actively manage the property, the fourth and fifth generations to do so—is made up of decidedly low-key aristocrats whose sprawling family tree intersected the more famous Antinori family in the 19th century.

While the hilly Carmignano countryside shares similarities with the better-known neighboring Chianti appellation, key differences such as altitude and temperature prompted Beatrice and Filippo Contini Bonacossi’s father, Ugo, to advocate for establishing it as a separate appellation. (Robert Camuto)

The story of Capezzana is intertwined with Carmignano, which was established as its own DOC in 1975 (retroactive to the 1969 vintage), breaking away from the Chianti Montalbano subzone following the efforts of Filippo’s father, Ugo Contini Bonacossi.

Ugo is a legend in Carmignano. His grandfather was the Count Alessandro Contini Bonacossi, an avid antiques collector whose private collection is housed in eight halls of Florence’s Uffizi Gallery. In the early 1920s, Count Alessandro bought Capezzana and two neighboring estates which, combined, were farmed by more than 120 sharecroppers. He started putting Villa di Capezzana into Bordeaux bottles, switching from the basket flasks the wines had been shipped in to the U.S. since the 18th century, according to family records.

A bigger wine revolution came in the decades after World War II, with the end of sharecropping, when Ugo’s generation became the first to dedicate itself to wine full time. He began replanting the estate to higher-density vineyards with a personal selection of clones, including Cabernet Sauvignon and Cabernet Franc cuttings from Bordeaux first-growth Château Lafite Rothschild.

“Our father was friends with the Rothschilds and wanted to make a wine like Lafite,” explains Benedetta Contini Bonacossi, 52, who manages the estate winemaking with Tuscan enologist Franco Bernabei.

I spent the morning with Benedetta and Filippo’s nephew Gaddo, 42, who is the estate’s agricultural manager. We visited some of Capezzana’s 40 vineyard parcels, which total 180 certified organic acres. The soils are a Tuscan jumble of clay, limestone, schist-clay galestro and other sediments. Typically Sangiovese is grown at the tops of hillsides with Cabernet and white Trebbiano below.

Carmignano’s vineyards are planted at lower elevations (up to about 980 feet) than Chianti to the south and are protected from cooling maritime winds by nearby Montalbano to the west. As a result, the reds, which can contain up to 20 percent Cabernet Sauvignon or Franc, tend to be rounder and more generous than many of its neighbors.

“Here and Chianti are two things that are completely different,” says Gaddo. “Our wines are softer.”

In the past 25 years, more than 40 Capezzana wines have scored 90 points or higher in Wine Spectator blind tastings. The flagship is the Villa di Capezzana Carmignano bottling, currently 80 percent Sangiovese blended with 20 percent Cabernet Sauvignon.

Since 1979, the family has also produced one single-vineyard Carmignano from a particularly sunny and windswept 12-acre hilltop vineyard. The more austere, complex Trefiano Riserva contains 80 percent Sangiovese complemented by 10 percent each of Canaiolo and Cabernet Sauvignon.

In another area closer to Capezzana is a southwest-facing Sangiovese vineyard called Viticciana, the last planted by Ugo before his death in 2012. To commemorate him, beginning in 2013, the family began making a single-variety Sangiovese called UCB—Ugo Contini Bonacossi.

“It was always our dream, and a challenge, to make a pure Sangiovese,” says Filippo’s sister Beatrice, 58, Capezzana’s sales director. “This was the ideal location.”

For lunch in the family dining room, Filippo opens a very-much-still-alive 1931 vintage of the Villa di Capezzana Carmignano. Like all old wines here, it had its cork replaced every 20 years.

Along with the Sangiovese- and Cabernet-based wines, Capezzana winemaker Benedetta Contini Bonacossi continues the Tuscan tradition of making sweet Vin Santo at the estate. (Robert Camuto)

In the afternoon, I toured the cramped 1930s-era winery with Benedetta and then the labyrinthine 16th-century cellars, which were partly walled off at the end of World War II to conceal the aging wines before the villa was requisitioned by German forces during their occupation of Central Italy.

The attic of more than one building is used for making long-aged, sweet Vin Santo from naturally air-dried estate grapes, mainly Trebbiano. Miniature barrels (caratelli)—some more than a century old and patched over many times—fill room after room.

Still Carmignano is the star here—even if it’s not as well-known as other Tuscan reds. “When I traveled and talked to sommeliers, I saw that some sell it as a super Tuscan,” says Beatrice. “At first I was very strict, and I said ‘No, no—it’s Carmignano.’”

She has since compromised. Traditions go only so far when you are thousands of miles from home.

“If you show it on a wine list as super Tuscan, people try it,” she says. “And they order it again.”

Home Videos The WORLD of WINE – Wine News. Cheap wine, tasting notes and cooking with wine The World of Wine – May 2021 … END_OF_DOCUMENT_TOKEN_TO_BE_REPLACED

How to visit Napa Valley on a Budget. In this video Carson and I explain a few ways to enjoy Napa on the cheap. Tip and advice about how to visit Napa … END_OF_DOCUMENT_TOKEN_TO_BE_REPLACED

Home Videos Get To Know Argentina Wine | Wine Folly If you love Malbec, Argentina is your ultimate wine region. But that’s not … END_OF_DOCUMENT_TOKEN_TO_BE_REPLACED