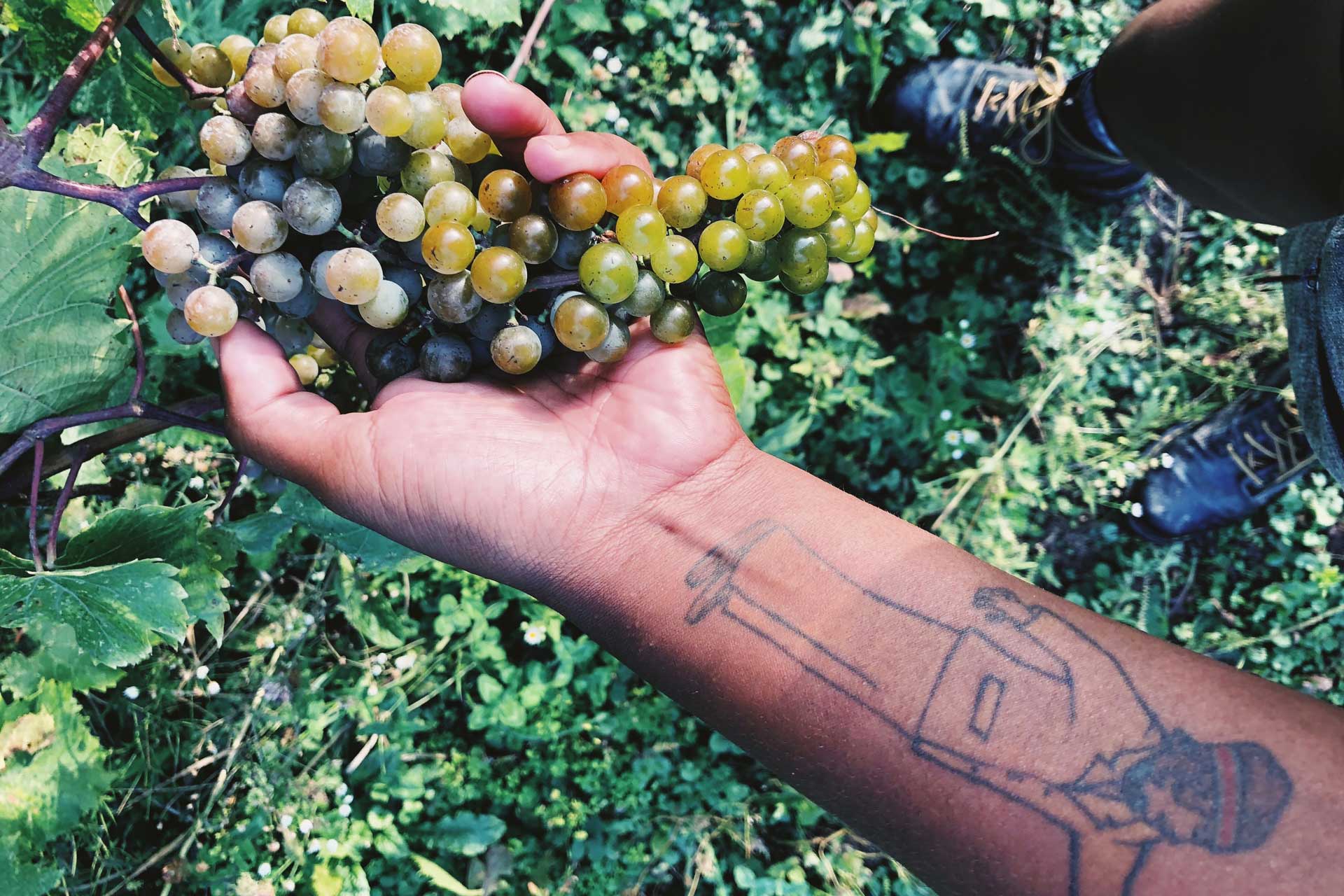 From a family-run Champagne house to a Chicago négociant, Black-owned wine labels abound. Here, a list of companies to seek out from the U.S., France, South Africa and beyond.

Bodkin Wines: Founded by Chris Christensen in 2011, this Sonoma, CA-based winery was the first to create sparkling Sauvignon Blanc in the U.S.

Brown Estate: Bassett and Marcela Brown bought an abandoned Napa Valley ranch in 1980 and turned it into the region’s first Black-owned winery. The label debuted its own line of wines in 2000.

Corner 103: Named after the location of its downtown Sonoma tasting room, Corner 103 is the brainchild of former financier Lloyd Davis.

Darjean Jones Wines: Owner/Winemaker Dawna Darjean Jones, Ph.D. is behind this California label that sources from well-known vineyards in Napa and Sonoma.

Davidson Wine Co.: Owner Lindsey Williams opened this North Carolina urban winery in 2019. By using sources from around the world, she’s able to produce over a dozen different wines.

Domaine Curry: Ayesha and Sydel Curry, wife and sister of NBA star Stephen Curry, debuted their new label with the 2016 vintage. They currently produce a Cabernet Sauvignon and a Sauvignon Blanc.

Earl Stevens Selections: Rap veteran Earl Stevens, also known as E-40, founded his own wine line in 2013. He is also behind the Tequila line, E. Cuarenta.

FLO Wine: Musician Marcus Johnson expanded his musical publishing business with wine in 2012. The line’s offerings include a red blend, Chardonnay and Moscato.

Fog Crest Vineyard: This Russian River Valley-based winery was founded by Rosalind Manoogian with husband, James in 1997. They focus on Chardonnay and Pinot Noir.

Frichette Winery: Shae Frichette is co-owner of this winery in Washington’s Red Mountain appellation. Seven varieties go into the line with an annual production of 2,000 cases.

J. Moss Wines: James and Janet Moss founded their small family winery in 2000. They source from their own small Napa Valley vineyard, as well as other notable sites in the region.

Jenny Dawn Cellars: In 2016, Jennifer MacDonald, owner/winemaker, established the first urban winery in Wichita, Kansas. With grapes from both California and Kansas, she is the state’s first African-American winemaker.

Le Loup Gris: Partners James Pendergrass, Pete Coticchia and Michael Jeter launched this California label in 2014, and named it after the grey wolves that once roamed the Napa Valley.

L’Objet Noir: Winemaker Dan Glover is behind this Sonoma-based label. Grapes for the line’s Pinot Noir are sourced from the renown Bacigalupi Vineyard.

Love Cork Screw: After 17 years in the industry, négociant Chrishon Lampley established her own wine brand in 2013. The label’s various offerings are available throughout the Chicago area.

Markell-Bani: Lifelong friends Gregory Markell Lawrence and Sean Bani Yisrael are behind this label based in Cincinnati, Ohio. The two wines are crafted from Concord and Niagara grapes grown in Pennsylvania.

McBride Sisters: Not only do Andréa and Robin McBride runs this wine label that sources from California and New Zealand, they also created the SHE CAN professional development scholarship fund for women in the wine industry.

MYX Fusions: Musician Nikki Minaj created this line of sangrias and flavored Moscatos, which launched in 2013.

Sapiens: Co-founder Tolu Obikunle was inspired to create a range of non-alcoholic wines because she often sought alcohol-free options while networking with colleagues on Wall Street. Sapiens offers a Cabernet Sauvignon and Tempranillo blend, and a sparkling rosé, both with 0% abv (alcohol by volume).

Shoe Crazy Wine: Founder Gwen Hurt, along with daughter Brittny, are behind this Virginia label. They work with vineyards in California, Washington and Bordeaux.

Simply Love Wines: This Chicago-based brand is the dream of Barbara Jackson. She created the label in 2013, with grapes from Napa Valley.

Sip & Share Wines: With grapes from Lodi, California, Owner Nicole Kearney crafts her vegan wines in Indiana. After experimenting with sangrias, she unveiled her Seven Words Wine Collection in 2019.

Stoney Wines: Established in 2019, Winemaker Donna Stoney is Oregon’s first Black female winemaker. A portion of sales proceeds is donated to support programs for people with intellectual and developmental disabilities.

Stover Oaks Vineyard & Winery: In 2004, Lou and Jan Garcia took over this El Dorado, CA, estate. They source grapes from their own five-acre vineyard as well as other sites throughout California.

Stuyvesant Champagne: Named after Bedford-Stuyvesant, the Brooklyn, NY, neighborhood, Marvina Robinson debuted her Champagne brand in 2020. The label’s vineyards are in Champagne’s Marne Valley, the Ardre Valley and the Aisne.

Vina Sympatica: Founder Sherrijon Gaspard is behind this line of red, white and violet sparkling wines made from Cabernet Sauvignon and Colombard.

Virgo Cellars: Winemaker Stefanie Jackson established this Oakland, CA-based urban winery in 2007. She sources her grapes from throughout California.

Vision Cellars: Owner Edward Lee “Mac” McDonald established this Sonoma County label in 1995. He is also notable the founder of the Association of African American Vintners.

Wade Cellars: NBA star Dwayne Wade partners with Napa Valley’s Pahlmeyer wines for this label established in 2015. The three-bottle line includes a red blend, a rosé and a white wine.

Armand de Brignac: Hip hop legend Jay-Z, also known as Shawn Carter, is behind this brand, made in partnership with the Cattier family in Chigny-les-Roses, Champagne.

Cheurlin Champagne: NBA star Isiah Thomas partnered with Thomas Cheurlin to bring this Champagne to the U.S. market in 2017.

La Fete du Rosé: Founder and CEO Donae Burston launched this rosé from St. Tropez in 2019 with the goal to reach multicultural drinkers. Burston makes donations on behalf of La Fete to the NAACP Legal Defense and Educational Fund and Color of Change.

Saikeri Estate: Farming two hours outside of Nairobi, in the Great Rift Valley, Winemaker Mukami Mwarania is one of few vintners in Kenya.

Adama Wines: A part of the Bosman Adama Group, this majority Black-owned wine company is also 30% owned by women.

Bayede: Offers a vast array of wines that are sourced from throughout the Cape Winelands, including Stellenbosch, Robertson, Franschhoek and Paarl.

Blouvlei Wines: At this brand from Mont du Toit Cellar, employees have ownership stake and a direct interest in the sale of the wines.

Botébo Wines: Located in Jacobsdal, Botébo is a nearly 120-acre farm, approximately 44 of which are under vine and produce a range of selections.

Cape Dreams: This brand strives to make an impact through dedication to a variety of notable projects and initiatives, including the Biodiversity Wine Initiative and WIETA accreditation.

Carmen Stevens Wines: Established winemaker Carmen Stevens has launched her own line of wines thanks to the support of angel funding through Naked Wines.

Compagniesdrift: This Black empowerment business is jointly owned by the Myburgh Family Trust and the Meerlust Workers Trust, which is comprised of 72 people with long-standing relationships to three long-established local wine farms.

Earthbound: Produced in Papkuilsfontein, outside Darling on the Cape West Coast, the portfolio of wines is organically produced in line with Fairtrade principles.

Epicuriean Wine: Established by four friends with a passion for wine, this brand sources grapes from various vineyards across the Cape, particularly in Stellenbosch for red grapes and Elgin for white grapes.

Fairvalley: Established by the Fairvalley Farm Workers Association, which currently boasts more than 60 member families of the organization, the Fairtrade-certified brand produces a quality value-minded range of red and white wines.

Five’s Reserve: This range of wines is a co-owned by Van Loveren Family Vineyard and its Employee Trust, with 100% of the grapes sourced from the company’s empowerment initiative, De Goree.

House of Mandela: With lineage and legacy to Madiba, through imagery, name and presentation, the House of Mandela wines strive to tell stories of the rainbow nation and offer a bridge between past, present and future.

Imvula Wines: Established by Siyabonga Mvula, Imvula is a 100% Black-owned South African wine brand that offers a range of wines sourced from the Robertson district of the Western Cape.

Inkosi Wines: A brand from Mayime Winery and the Mayime Promary Agricultural Cooperative in the Eastern Cape, the Inkosi line, named after the Xhosa/Zulu word for “the Chief,” features Chardonnay and Pinotage.

J9 Wines: Founded by Janine Petersen, one of the youngest Black wine-company owners in the country, J9 sources wine from winemakers across the Western Cape.

Koni Wines: Founded by Koni Maliehe in 2015 to impact the lives of South Africans through job creation and a sustainable legacy for future generations, the line currently features varietal red wines and blends.

Koopmanskloof: Set in the Bottelary Hills subregion of Stellenbosch, this Fairtrade-certified brand invests in numerous programs that promote social, economic and environmental development.

Kumusha Wines: Created and crafted by sommelier Tinashe Nyamudoka, Kumusha, which translates to “your home, roots or origin” in the Zimbabwean Shona language, features a white and red blend sourced from the Breedekloof Valley.

Land of Hope: A partnership between the Land of Hope Trust and Radford Dale, the brand’s portfolio features a range of white and red wines that benefit the trust and member families through high-quality education and skills development.

Mosi Wines: A native of Zimbabwe, owner and winemaker Joseph T. Dhafana named his brand, which includes a Chenin Blanc and Syrah, after the village he grew up in.

PaardenKloof: One of the first South African Black-owned wine estates to cultivate their own vineyards, the brand features single-vineyard, single-varietal wines from Cabernet Sauvignon, Pinot Noir, Shiraz and Sauvignon Blanc.

Sena Wines: Comprised of a red, white and rosé selection, this line of de-alcoholized wines are crafted by founder and winemaker Ziyanda Tutu.

Ses’Fikile: Founded 15 years ago by a group of women through an empowerment deal with Flagstone Winery, today, the brand is crafted by a team of winemakers and a viticulturist in the Stellenbosch district of the Cape Winelands.

Seven Sisters: Driven by the passion of the seven sisters of the Brutus family, this label features an equal lineup of varietal-labeled red and white wines.

Siwela Wines: Established in the Western Cape by Siwela Sweetness Masoga, the brand lineup includes a red, rosé and sparkling wine from grapes sourced throughout the Stellenbosch district.

Solms-Delta: This historic Franschhoek winery, with a vast portfolio of entry to reserve-level wines, is now 50% owned by the workers and residents of the farm.

Son of the Soil Wines: The third generation of wine-industry workers in his family, Founder and Director Denzel Swarts launched this range of three wines, a Chenin Blanc, Pinotage and Méthode Cap Classique (MCC) sparkling wine, in 2018.

Tesselaarsdal Wines: After 15 years in the wine business, Owner Berene Sauls was provided the opportunity to launch her own brand with the assistance of Hamilton Russell Vineyards and its team. The brand currently focuses on Pinot Noir from the Hemel-en-Aarde Ridge.

Women in Wine: Founded in 2006 and the first Black-owned wine company controlled and managed entirely by women, the brand only sources wine from farms that comply with socio-economic legislation with specific reference to ethical and environmental practices and Black economic empowerment.

Home Videos The WORLD of WINE – Wine News. Cheap wine, tasting notes and cooking with wine The World of Wine – May 2021 … END_OF_DOCUMENT_TOKEN_TO_BE_REPLACED

How to visit Napa Valley on a Budget. In this video Carson and I explain a few ways to enjoy Napa on the cheap. Tip and advice about how to visit Napa … END_OF_DOCUMENT_TOKEN_TO_BE_REPLACED

Home Videos Get To Know Argentina Wine | Wine Folly If you love Malbec, Argentina is your ultimate wine region. But that’s not … END_OF_DOCUMENT_TOKEN_TO_BE_REPLACED