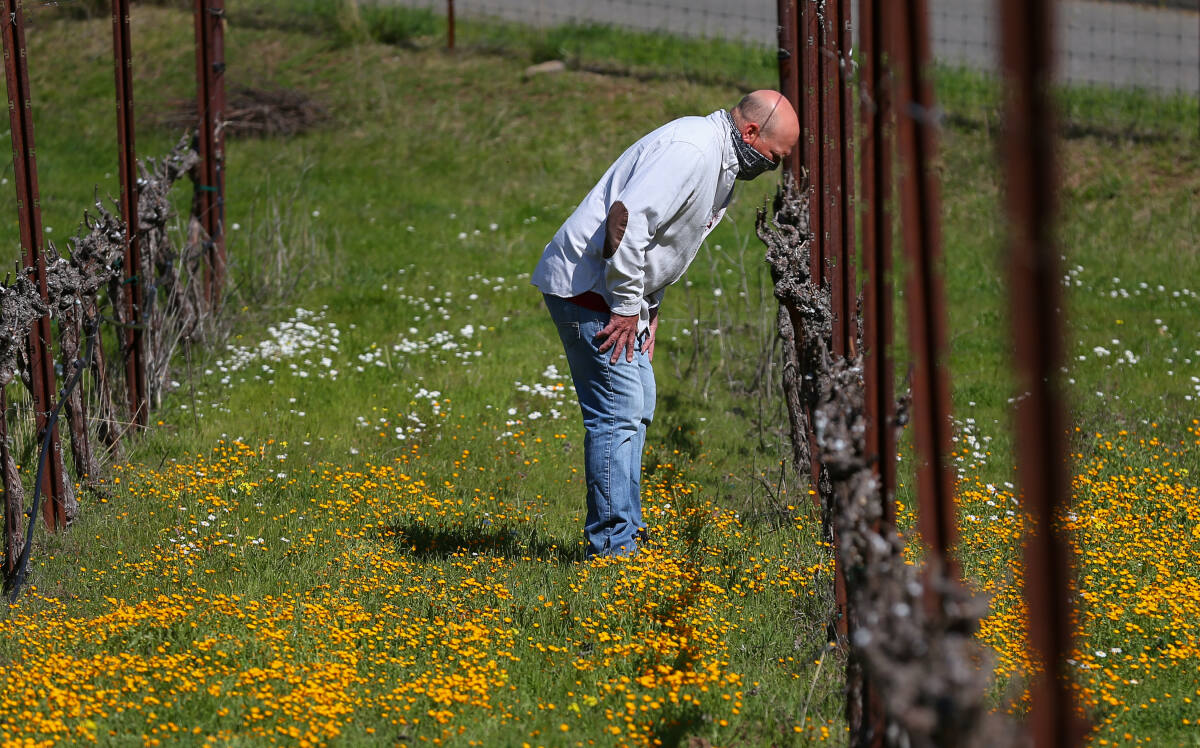 In a small corner of the Paradise Ridge Winery property in Santa Rosa last week, buds broke open on some chardonnay grapevines, signaling the kickoff of the annual grape-growing season that culminates with harvest from late summer into fall.

The annual ritual this year takes on even greater meaning for the wine sector than in past seasons. Vintners across Sonoma County are eager to turn the page on 2020, one of the most difficult in modern history for the area’s trophy wine industry that remains a massive local economic driver through production of wines and tourism.

Growers and winemakers in the sector reeled last year after the coronavirus pandemic forced intermittent closures of local winery tasting rooms, while extreme heat plus two massive wildfires damaged grapes. The result was the value of the county’s grape crop plunged by nearly half to $356 million.

“Thank goodness for 2021, at least it’s a fresh start,” said Karissa Kruse, president of the Sonoma County Winegrowers trade group. “We’re very excited for that. Our farmers are already back to doing what they do best.”

Bud break in the vineyards last week was spotty, occurring in a few warmer vineyard areas that traditionally go first, such as the Russian River Valley and the Carneros region that borders San Pablo Bay, growers said.

The fruit buds on the grapevines on the 60,000 vineyard acres across the county aren’t fully expected to start bursting until the middle of March. Then it likely will take more than a month, depending on sun exposure, climate and when the vines were pruned during the winter, for full bloom.

Paradise Ridge winemaker Dan Berwick said the bud break in a corner of his winery’s Nagasawa Vineyard occurred around the historical average time although last year was earlier.

Others vintners are waiting. The Pedroncelli Winery in the Dry Creek Valley, for example, was in a holding pattern looking for its first sight of green shoots, said Julie Pedroncelli St. John, who handles marketing at her family’s winery.

“Typically as rule of thumb it’s mid-March. But it also depends on what our February has been like and February had some good weather,” Pedroncelli St. John said.

While the waiting game continues, vintners said they are hoping March will bring more rain to help moisten soil heading into full bloom later in the spring, and into the summer months.

Local growers typically start picking wine grapes — some of the finest and most expensive in the country — in mid-August and continue into early November in a few vineyards.

Sonoma County is still listed under a drought stage from lack of rainfall, a worry for growers and winemakers. Since Oct. 1, 2020, the start of the rain year, 10.39 inches of rain has fallen at the Charles M. Schulz-Sonoma County Airport. That’s almost 18 inches less that the historical average by this point, according to the National Weather Service.

“We are all concerned at this point,” said Margo Van Staaveren, winemaker for Chateau St. Jean Winery in Kenwood. “It’s definitely going to be a drier year. … We’re definitely in a deficit and we would like to see some more.”

More rain is slated to move into the county on Monday night, along with a cold front, and raindrops are expected to fall again on Tuesday and Wednesday. Warmer temperatures won’t return until Thursday afternoon, which will prompt even more breaking of buds in vineyards throughout the region.

“I anticipate this rain will be very good and then when we get some warm weather we’ll see a lot of early-ripening (grape) varietals breaking bud in the less-cool areas,” Paradise Ridge’s Berwick said.

Home Videos The WORLD of WINE – Wine News. Cheap wine, tasting notes and cooking with wine The World of Wine – May 2021 … END_OF_DOCUMENT_TOKEN_TO_BE_REPLACED

How to visit Napa Valley on a Budget. In this video Carson and I explain a few ways to enjoy Napa on the cheap. Tip and advice about how to visit Napa … END_OF_DOCUMENT_TOKEN_TO_BE_REPLACED

Home Videos Get To Know Argentina Wine | Wine Folly If you love Malbec, Argentina is your ultimate wine region. But that’s not … END_OF_DOCUMENT_TOKEN_TO_BE_REPLACED