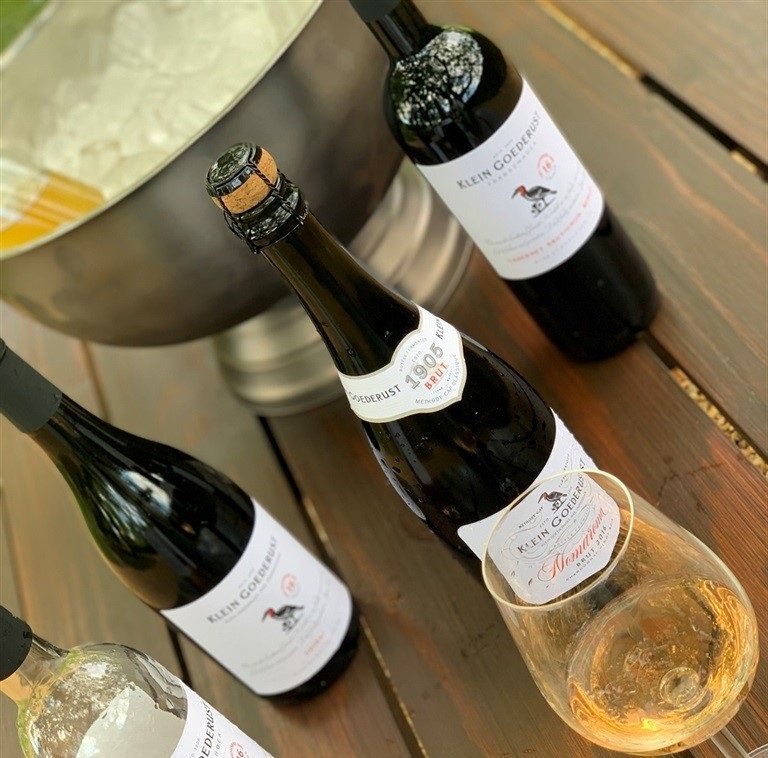 If journalist and author Michael Gladwell is to be believed, 10 000 hours is “the magic number of greatness”. But the great Nomaroma Siguqa can probably throw out a number that far exceeds that.

After all, the matriarch of the family that acquired the Klein Goederust vineyard in Franschhoek, Western Cape, in 2019 started learning about wine when she was a young woman labouring on farms 36 years ago.

“Mama makes a killer MCC [méthode cap classique]” exclaims Makhosazana Zwane-Siguqa about her mother-in-law. The magazine editor is, along with her husband, Paul Siguqa, a director of Klein Goederust. The pair may run the business, but mom’s expert palate is always consulted.

“When we were making the MCC, we would go to her and she sent us back to change things six times! She’d say ‘too bitter’ or ‘too sweet’, because she knows exactly what goes into the perfect one. I told her I wanted us to get the taste as close to my favourite Champagne as possible and she told the award-winning winemaker Rodney Zimba how to achieve that.”

Today, the MCC is named Nomaroma as “our tribute to her for having raised Paul and exposed him to the wine-making business. She started as a wine farm labourer and over the years she was promoted to work in the cellars, where she learnt how to make various wines.”

In fact, the elder Siguqa, who was born in the Eastern Cape, spent many of her working years at Backsberg. That is also where her son was born.

Paul quickly took to the science behind making wine and was mentored by the family his mother worked for. As an adult, he held on to his dream of one day buying his own vineyard and bottling many of the wines he grew up with a keen interest in. That day came two years ago when he acquired Klein Goederust.

“Our interest in the wine industry is driven by both the sentiment of transforming from being a family of farm labourers to becoming that of owners, as well as the business foresight to recognise the economic potential of the industry.” says Paul.

The Siguqa family undertook to bottle wines that had already been harvested in their new vineyard, including a Merlot rosé, a Cabernet Sauvignon-Merlot, a Shiraz and the MCC.

The Siguqa family gave the bottles a new design, complete with the family’s crest – the southern ground hornbill – on the label. The totem is said to be “a symbol of good fortune and protection. A bird firmly perched in African beliefs.”

The Nomaroma vintage 2016 brut has a subtle acidity and, once chilled, is a refreshing drink that won’t give you a headache. Sugar and sulphites were kept to a minimum and the bubbly was allowed to age because the family doesn’t intend to serve any bottle that is younger than four.

The vineyard is currently under construction in some areas and is expected to be reopened to the public for wine tasting and overnight stays in the last quarter of this year.

The directors hope this acquisition will create intergenerational wealth as “the people who will benefit most from our hard work and sacrifices will be our children and their children,” Paul concludes.

Home Videos The WORLD of WINE – Wine News. Cheap wine, tasting notes and cooking with wine The World of Wine – May 2021 … END_OF_DOCUMENT_TOKEN_TO_BE_REPLACED

How to visit Napa Valley on a Budget. In this video Carson and I explain a few ways to enjoy Napa on the cheap. Tip and advice about how to visit Napa … END_OF_DOCUMENT_TOKEN_TO_BE_REPLACED

Home Videos Get To Know Argentina Wine | Wine Folly If you love Malbec, Argentina is your ultimate wine region. But that’s not … END_OF_DOCUMENT_TOKEN_TO_BE_REPLACED