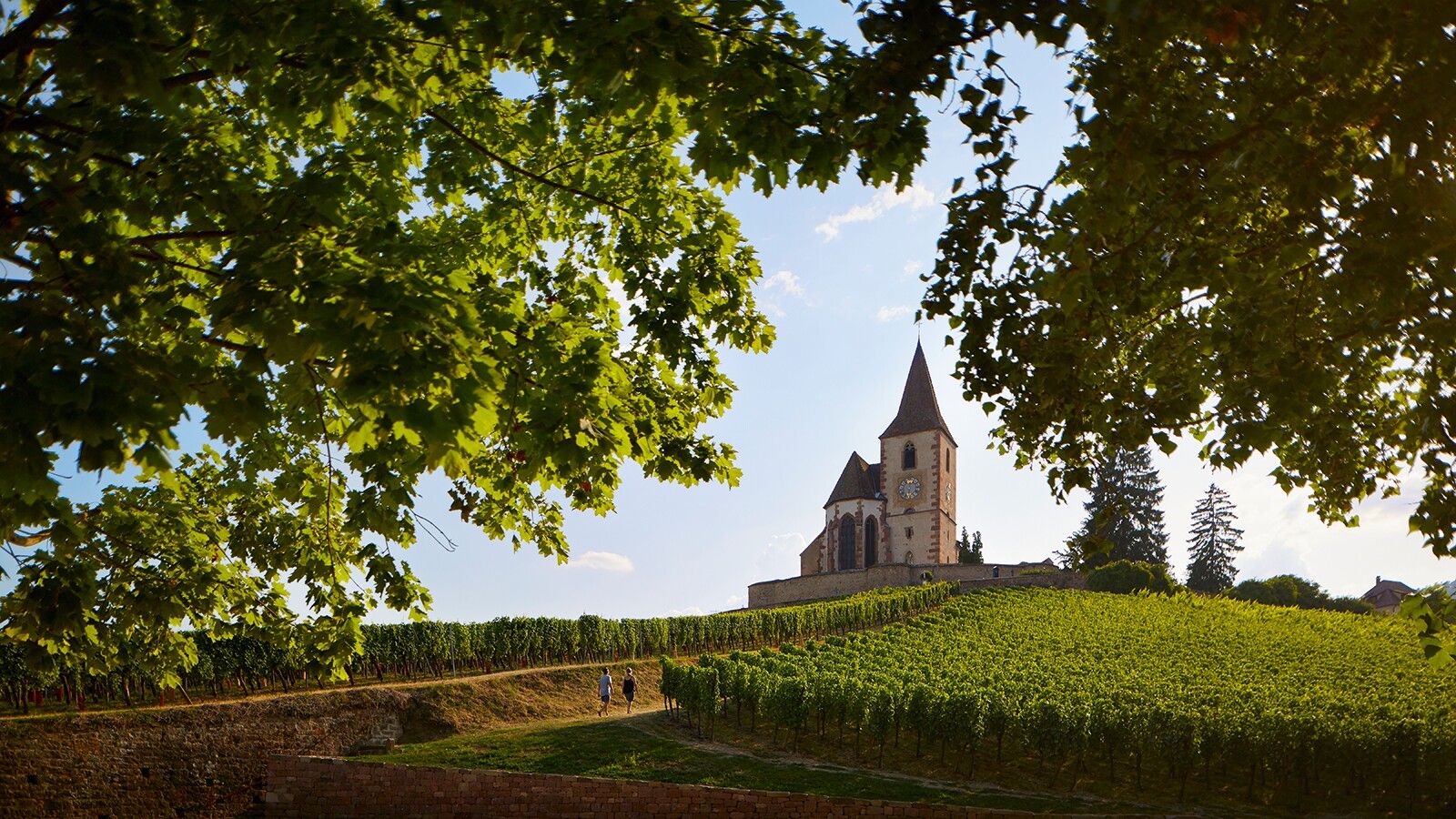 When a wine-lover visits a wine region, it’s easy to forget there’s more to agriculture than grapes. In July, in Colmar, the absurdly picturesque town at the heart of the Alsace vineyards, Petit Jean is happy to set me straight. The 27-year-old chef (whose real name is Jean Kuentz) points out that this is girolle season, a source of even more joy to him than ripe grapes are to me. “I love scraping girolles,” he says, “I could do it all day.”

At his restaurant, La Maison Rouge, those girolles are served in a rich broth, topped with a poached egg, as the follow-up to an incredible slab of homemade pâté en croûte. Luckily, Petit Jean is less monomaniacal than me, so there’s more to follow: fresh tomatoes and herbs, homemade pickles, mustard sorbet and cucumber water to balance Rhine eel and Bresse guinea fowl.

I don’t go thirsty, either: his selection of local wines, many by the magnum, is fabulous.

I’d driven into Alsace from the north of France, marvelling at how calm this easterly region is; how pretty, with its walled medieval villages and steep vineyards topped with forests or ruined castles. Yet nothing here has a peaceful history: the rich soils are a result of ancient geographical upheaval, tearing apart the Vosges and Black Forest mountains and driving the Rhine between. The Franco-German border has shifted uneasily back and forth. But uncomfortably situated as it is, fertile land has its advantages, and the food and wine have remained superb — whichever nation was reaping the benefits.

What’s surprising is how little all that discomfort shows. With its half-timbered houses and cobbled streets, Alsace must be one of the best-preserved regions in Western Europe. It’s easy to imagine the fishermen sliding their boats into the Lauch river where relaxed tourists, sipping wine, sit now.

I spend a tranquil afternoon in Belvedere, the rooftop bar of Cattin winery in Vœgtlinshoffen, sharing a plate of excellent local charcuterie and one of their elegant Rieslings with Anaïs Cattin, who’s married into the 12th generation. We look out over the Black Forest in one direction and Colmar in the other, discussing the drawback to living in such a strategic location: Vœgtlinshoffen was destroyed in both world wars.

View over the medieval town of Riquewihr.

From there, I drive into Eguisheim: another picture-postcard village, its lanes stuffed with little shops selling sweets and bretzels — the dough braids we know as pretzels. But a winemakers’ festival is in full swing in the main square, full of tables and cheery young men holding bottles. The village has more than 30 wineries, despite a population of just 1,600, and several — Bruno Sorg, Christian and Veronique Hebinger — are already favourites of mine. But it’s Pierre-Henri Ginglinger’s Crémant that impresses; it’s the perfect accompaniment to a tarte flambée, the area’s creamy, tomato-less bacon pizza.

Later in the afternoon, we head to the Michelin-starred L’Atelier du Peintre, an elegant restaurant in central Colmar whose young chef, Loïc Lefèbvre, supplemented a decade in top French kitchens with three years in Scotland. Each dish is accompanied by bountiful vegetables, herbs and flower petals, the mackerel so strewn with tomatoes and leaves that I initially think it’s a salad.

Alsace’s great gifts are hard-won: first, there was the geological upheaval that formed the region. Second, the political tussles have made life difficult, most notably in terms of language. I meet people whose first language is French but whose parents’ mother tongue was German, while their parents had grown up speaking the Alsatian dialect. But great food can be a form of communication. Whether they ask for tarte flambée or flammekueche, the locals understand each other.

And then there’s the third vital fault line in the region: religion. Once Protestantism took hold in Germany, the country’s Catholics had a tendency to flee towards Catholic France; the French Protestants, on the other hand, looked towards Germany. They met in Alsace. The calm integration of historical enemies seems, to me, a true miracle. But then, when you have around 20 different types of soil, maybe you’re better at understanding the advantages of diversity.

To this day, religion bubbles up in some unlikely places. At Hugel winery in Riquewihr, Jean-Frédéric Hugel explains that the gargantuan, ovoid wooden barrels that age the region’s wines are decorated when the winemaker is Catholic and left plain if the family is Protestant. Another winemaker, Roly Gassmann, tells it slightly differently. “Fish carved on the barrel are Catholic,” he says, “and mermaids are Protestant.” Don’t expect agreement in Alsace: harmony, yes, but consensus? Never. There’s even a little church, up above the Rosacker vineyard, that alternates services — an impressively amiable cohabitation I’ve never seen elsewhere.

A savoury creation at the Michelin-starred L’Atelier du Peintre.

All that variety, thriving on superb soils: no wonder the cuisine is so good. After all, great cooking involves combining different textures and flavours.

Chef Jean-Luc Brendel is obsessed with produce in a way that makes most Alsatian chefs look a little vitamin-deprived. My tasting menu at his La Table du Gourmet in Riquewihr includes produce from his vast garden: ingredients so full of flavour, so inventively combined, that they could turn a cannibal vegetarian. There’s Liquid Salad, with beetroot and hibiscus, and kohlrabi tagliatelle with truffle. Their colours and crosshatched arrangements are intended to reflect the landscape — green hills and painted houses, crisscrossed with beams.

In his garden, Brendel, who’s held a Michelin star since 1996, tenderly disinters a red onion. “I can only use what I have,” he says. “It’s up to the chef to adapt to nature; the gardener shouldn’t adjust to suit the cook.”

For my last meal, I go downmarket, in every sense. At Riquewihr’s Tuesday evening open-air food market, stalls sell salads, wine and meat, and there’s a grill available to cook on. Munching on self-scorched ribs after Michelin-starred vegetables, I permit myself a little self-congratulation: if adaptability is the true Alsatian language, I’ve surely acquired a working vocabulary.

Three restaurant to try in Alsace

This snug wine bar in the centre of Colmar has around 180 wines by the glass, many of them local. There’s no kitchen, but they do offer local charcuterie, foie gras and cheese to sop up all those wonderful wines — and those won’t disappoint, either. Around €30 (£27) for a bottle of wine (at the cheaper end) and charcuterie.

Local boy Jean Kuentz went to the Michelin-starred kitchens of Paris to learn his trade, but here he’s more interested in ‘bistronomie’: showcasing simple local produce through such dishes as that pâté en croûte, and eel from the Rhine in a sorbet of mustard and Sylvaner, a local grape. Around €40 (£36) for two courses without wine.

In Labaroche, a 30-minute drive from Colmar, this hotel in the hills has a restaurant with a spectacular terrace, and a menu that artfully demonstrates the communion of French and German traditions. Case in point is the matelote, a creamy stew of freshwater fish from across the Vosges. Around €45 (£41) for two courses without wine.

Less a tart than a thin-based pizza, this substantial snack comes topped with a mixture of fromage blanc and cream, plus lardons and onions, and is the ideal accompaniment to the region’s simpler white wines. You’ll also find it called flammekueche.

Long ago, women would take this stew of potatoes, onions and meats marinaded in white wine to the baker, who’d add a pastry crust and stick it in the cooling communal oven while the women did their laundry. Then they’d collect it on their way home.

The region’s signature grape is almost invariably bone-dry but can be very aromatic. Don’t get bogged down in the befuddling Grand Cru system — visit a wine bar or restaurant and try a couple.

This semi-hard, powerfully aromatic cheese from the village of the same name near Colmar is made from unpasteurised cow’s milk. It also has its own quality designation, or appellation d’origine contrôlée (AOC).

Easyjet flies from Gatwick to Basel from £49 return. From the airport, take two local trains (the TER) to Colmar.

Car hire is available from Sixt Rental at Basel airport from £45 a day.

Published in the March 2021 issue of National Geographic Traveller (UK)

Find us on social media

Home Videos The WORLD of WINE – Wine News. Cheap wine, tasting notes and cooking with wine The World of Wine – May 2021 … END_OF_DOCUMENT_TOKEN_TO_BE_REPLACED

How to visit Napa Valley on a Budget. In this video Carson and I explain a few ways to enjoy Napa on the cheap. Tip and advice about how to visit Napa … END_OF_DOCUMENT_TOKEN_TO_BE_REPLACED

Home Videos Get To Know Argentina Wine | Wine Folly If you love Malbec, Argentina is your ultimate wine region. But that’s not … END_OF_DOCUMENT_TOKEN_TO_BE_REPLACED