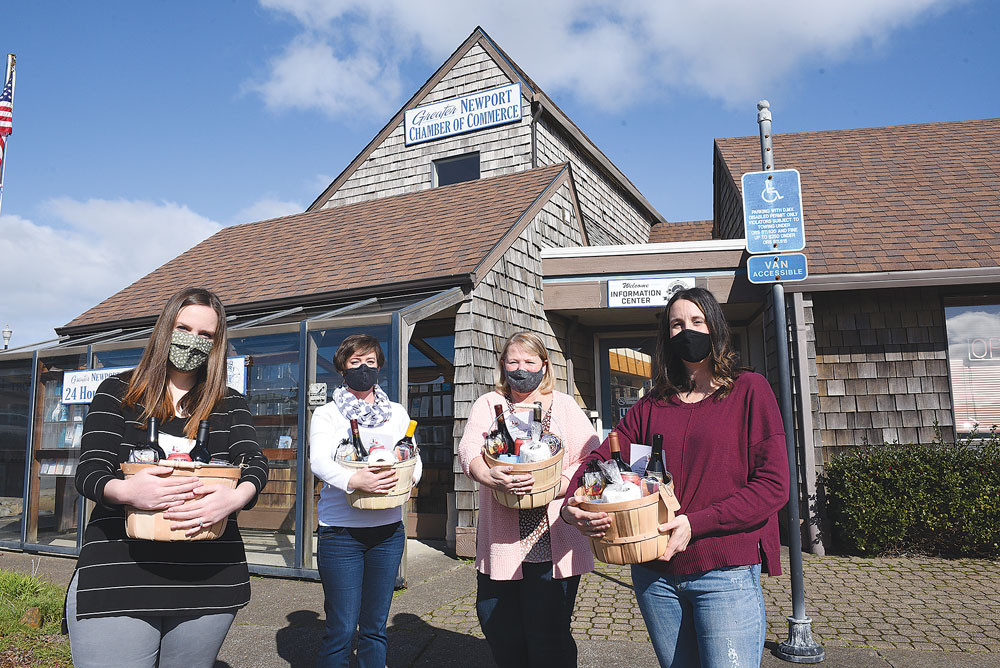 So many of the annual events in Lincoln County have been affected over the past year by the COVOD-19 pandemic, and most had to be drastically changed or canceled altogether. The same is true for one of the central coast’s premier events — the Newport Seafood & Wine Festival. But the popular event, now in its 44th year, is still taking place, with a goal of keeping the spirit alive while maintaining a primary focus on the safety of community members and coastal visitors.

The festival takes place this weekend, Friday through Sunday, but rather than gathering in large tents in South Beach, people have pre-ordered to-go baskets that they can enjoy from the safety and comfort of their home or hotel room.

Bobbie Price is the tourism and festival manager for the Greater Newport Chamber of Commerce, which puts on the annual festival. She said what made planning difficult this year were the constantly changing health regulations.

“We’ve gone through several different versions of what this could actually look like when it came to February because it takes months to prepare, and there’s so many unknowns,” Price said. “To be able to project ahead where we’re going to be was very difficult, so we ended up deciding, after changing a few different times, that we would just plan for the worst case scenario — if we happened to be in extreme risk in February, how we can pull this off.

“There was lot of variations of how this could happen,” she added, “and we’re happy to have finally landed on something that I feel is successful for what we have and it being the very first time.”

People purchasing a to-go basket were able to select two bottles of wine from among around 30 options. All of these wines are from past vendors at the Newport Seafood & Wine Festival, and folks were able to choose their own taste preferences. Each basket also contains a can of beer from Rogue Ale, a can of locally canned tuna from Mo’s Seafood, a custom wine opener, Chinook Winds Casino items and 2021 festival wine glasses. In addition, people had an option of adding a Dock Box from Local Ocean Seafoods to their order. “When they pick up their basket, they’ll pick up their seafood, so we can offer both the seafood and the wine experience,” Price said.

This year’s festival will include two virtual events for people who purchased a basket. At 7 p.m. today (Friday) there will be a virtual, live chef-led cooking demo featuring Michael Durham, executive chef at Chinook Winds, who will guide viewers through the preparation and cooking of a variety of distinctive dishes. Saturday evening will feature an interactive experience including live wine tasting, winemaking demonstration, seafood cooking demonstration, tips on the coastal seafood industry from a local expert, trivia and prizes courtesy of Chinook Winds Casino Resort.

Price said she has been encouraged by the support people have shown for this year’s Newport Seafood & Wine Festival, despite the changes that had to be made. They sold more than 500 baskets, many of which were shipped out, with the remainder to be picked up at the chamber office this weekend. “When people made their purchase, they chose a time slot to arrive. We’ll have it ready for them when they arrive,” she said.

“It has definitely been a learning experience,” Price added. “It’s been fun to problem-solve and get creative and figure out a way that we can still bring a long-standing community event to the public.” And certain elements could continue down the road. “It may be a way to add on to the event in the future for people who maybe don’t want to do large crowds but still would like to participate. It might be something we could still offer for future festivals.”

She concluded, “I want to emphasize that we really wanted to do something that was going to be safe. We’re really encouraging people to get their basket and enjoy their wines and the virtual festival experience from the safety of their home or hotel.”

The Newport Seafood & Wine Festival has gone virtual this year in an effort to keep the event safe for community members and visitors alike. Pictured are Greater Newport Chamber of Commerce staff members Julia Ryan, left, marketing manager; Lonna Roe, office and visitor services manager; Judy Kuhl, executive director; and Bobbie Price, tourism and festival manager. (Photo by Steve Card)
To-go baskets for this year’s Newport Seafood & Wine Festival fill several tables at the Greater Newport Chamber of Commerce building. An appropriate addition to each basket is roll of toilet paper with a label stating, “The year we rolled with it, 2021.” (Photo by Steve Card)
To-go baskets for the 44th annual Newport Seafood and Wine Festival include two bottles of wine and a number of other goodies. (Courtesy photo)

Home Videos The WORLD of WINE – Wine News. Cheap wine, tasting notes and cooking with wine The World of Wine – May 2021 … END_OF_DOCUMENT_TOKEN_TO_BE_REPLACED

How to visit Napa Valley on a Budget. In this video Carson and I explain a few ways to enjoy Napa on the cheap. Tip and advice about how to visit Napa … END_OF_DOCUMENT_TOKEN_TO_BE_REPLACED

Home Videos Get To Know Argentina Wine | Wine Folly If you love Malbec, Argentina is your ultimate wine region. But that’s not … END_OF_DOCUMENT_TOKEN_TO_BE_REPLACED