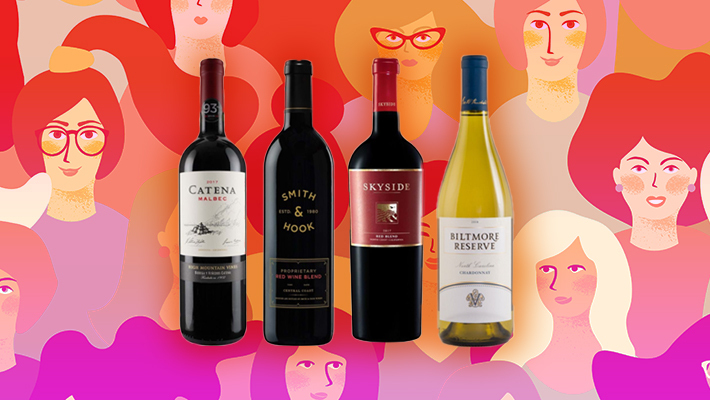 Ready for a crappy stat? Of the 172 people who have earned the Master Sommelier title through the Court of Master Sommeliers’ Americas chapter, only 28 are women. When it comes to actual winemaking, the figures are even starker. Of the more than 4,000 wineries scattered across California, only 10 percent operate under the guidance of head winemakers who identify as women. And only four percent of all wineries are actually owned by women, according to Lucia Albino Gilbert and John C. Gilbert’s 2020 book, Women Winemakers: Personal Odysseys.

As far as creating equal opportunities and the empowerment of women goes, the wine industry—like many others—has been sluggish at best. The problem extends across all sectors of the industry, from winemaking to importing and distributing on down to the sommeliers. Simply put, the industry could use some change.

There are some folks who are helping increase the visibility of women in wine, though. Folks like Alexandra Schrecengost — the founder and owner of Virtual With Us, a women-led hospitality company that hosts virtual wine tastings and cooking events for brands looking to entertain prospective clients and boost team-building among employees. Just months after launching a wine-centric company during (!) a global pandemic, Schrecengost has built a team of women who know their vino and are dedicated to fostering a more inclusive environment for people of all backgrounds and identities in the field.

“Change has been a little slow because of the industry itself,” Schrecengost says. “There is a lot of women supporting women, but I think the other side of that is the need for more men to stand up for women in terms of pay grade and position. If a lot more of the male leadership started to step forward too, things could only get better. I haven’t seen enough of that.”

Through Virtual With Us, Schrencengost highlights female sommeliers, who lead the company-wide wine tastings. Female chefs are in charge of the cooking component, and whenever a chocolate pairing is involved, Schrencengost sources from 2 Chicks With Chocolate, a mother and daughter-duo making chocolates and treats out of their New Jersey shop. Recently, Virtual With Us partnered with Johnson & Johnson for an International Women’s Day wine tasting the company held for its employees, during which Schrencengost showcased wines by the Robin and Andrea McBride of McBride Sisters Collection as well as Laura Catena of Bodega Catena Zapata.

With all the attention women are receiving throughout Women’s History month, it’s only right that some of the boss ladies who are putting their imprint on the wine industry get a proper shout-out. To go with Schrencengost’s two picks above, we rounded up six more winemakers (total of eight!) who have proven that women can lead in wine — and shown that via the fabulous bottles they produce, year after year. If you want to show your support while getting more women-made* wines on your dinner table, I’ve linked where you can purchase each bottle in the price points listed below.

*Not all of these women are winemakers for labels that they own.

Sisters Robin and Andrea McBride may have launched their label McBride Sisters Collection to share the joy of wine with drinkers around the globe, but their dedication to female empowerment has put the sisters front and center in the march for change.

“These are women of color that came into an industry that’s predominately male, but they’ve really shown how they support women,” Schrencengost notes. “They have their scholarships and their funding initiatives that women can apply for if they’re starting their own business. They’re trying to support women in the industry by funding them.”

This charming pale golden wine is made of 100 percent chardonnay. Tropical aromas are on full display while the palate is drenched in flavors of ripe stone and citrus fruits like apples, pears, and lemon. Overall, the wine maintains a creamy texture and features a slight hint of oak in the finish.

Laura Catena spent her childhood at her grandfather’s winery in Mendoza, Argentina. Although she got a medical degree from Harvard University, Catena’s love for wine lured her back to the family business. While she works as a fourth-generation winemaker, Catena is also a co-founder of the Catena Wine Institute, which specializes in wine education with a specific focus on Argentinian wines.

Made of 100 percent malbec grapes, this purplish-red wine is busy with aromas of red and blackberries and fresh florals like lavender and violet while the palate is juicy with black and blueberry notes. A hit of cinnamon and nutmeg on the back end gives the wine a kick that gets rounded out with flinty minerality and fleshy tannins—the naturally occurring polyphenol found in fruit skins and seeds that inform a wine’s astringency—in the exceptionally long finish.

Sonoma State University alum Jamie Benziger serves as the head winemaker at Imagery Estate Winery in Sonoma, California. She took over the role following her father and Imagery founder Joe Benziger’s retirement in 2017. Since then, Jamie Benziger has helped put the winery on the map. She won the Best Woman Winemaker award at the 2019 International Women’s Wine Competition and was recently featured on Wine Enthusiast’s list of “40 Under 40 Tastemakers.”

You can’t miss the fruit aromas jumping out of a bottle of this 100 percent pinot noir wine. It’s fresh with aromas of jammy strawberries and blueberries. The berries are the star players on the palate too, but they get a savory lift from notes of white pepper and rose petals. A dash of acidity, chewy tannins and a hint of oak in the quick finish only adds to the wine’s character.

Before Anne Dempsey became the head winemaker for Skyside Wines in Northern California, she studied viticulture and enology at the University of California, Davis and made vino in New Zealand and South Africa. Dempsey’s immense understanding of terroir—aspects of a region’s climate, soils, and terrain that impact the taste of the wine—has led her to produce stunning wines that fully convey the varying nuances of California’s landscape for more than a decade.

This wine is comprised of merlot, syrah, cabernet sauvignon, malbec, and petite sirah. The fruit is picked from Skyside vineyards across Mendocino, Sonoma, Lake, Solano, and Napa counties. The differing climates and landscapes of the vineyards shape the wine’s robust character. Baking spices and florals inform the aroma on this deep red wine, while intense flavors of ripe black and blue fruits, oak and dark chocolate influence the taste. Velvety tannins and a spritz of acid meet somewhere in the middle and extend into a long and lingering, smooth finish.

Austria native Julia Prestia is the owner and head winemaker of Venturini Baldini, a winery that specializes in lambrusco and sparkling wine in the Emilia-Romagna region of the country. Since taking over the company in 2015, Prestia has continued the winery’s mission towards organic and sustainable viticulture as Venturini Baldini was among the first Italian producers to make wines through entirely organic production. Through her guidance, the winery won the highest honor in the Lambrusco category when they were awarded a Tre Bicchieri (an Italian wine award) in 2018.

This medium-bodied sparkling red wine is made of Salamino grapes grown on sandy clay soil. It is thoroughly fresh, with fragrances of cranberry, black cherry, and garden herbs like spicy cilantro, basil, and thyme. On the palate, the wine is slightly dry with a hint of tart red berry. The bubbles are refined and persistent from the first pour to the last sip.

As a pre-med student at the University of California, Davis, Brittany Sherwood was merely fulfilling a course credit when she took a wine class during undergrad. Who knew it would lead her to shift her major to viticulture and enology and eventually land her a winemaker position at the renowned California winery, Heitz Cellar. Sherwood has been with the company since 2012. Prior to that, her studies led her to work in wine programs in France, Germany, Switzerland, and Spain, and intern in Oregon’s famous Willamette Valley.

Sherwood has helped maintain the Heitz Cellar’s shining reputation by creating superior California cabernet sauvignons among other wine varieties, and she is slated to launch a new Napa-based wine with the owners of Heitz Cellar later this year.

Open the bottle of this cabernet sauvignon and you’ll be greeted with aromas of raspberries and licorice. This wine is plush with flavors of cassis and star anise that mingle with notes of black plums, black currants, and nutmeg. It’s an elegant, sturdy wine with structured tannins that lend to its complexity and body. The finish is polished and long.

Sharon Fenchak made wines across America before she joined the Biltmore Estates team in 1999. After years of helping craft a range of beautiful wines, she was promoted to the head winemaker role at the North Carolina winery in 2018.

This is a bright, full-bodied chardonnay that is oozing with tropical fruit aromas and buttered bread taste. The fragrance is loaded with smells of lemon, lime, and guava fruit. The palate is dotted with flavors of marmalade, apple butter, and vanilla, while a subtle note of oak on the backend of the wine continues throughout its lengthy finish.

Megan McCollough joined Smith & Hook as an assistant winemaker back in 2011. With a penchant for cabernet sauvignon and a background in enology, she’s helped the team there develop innovative approaches to sourcing and producing the red wines she loves along California’s Central Coast. Her efforts paid off in 2017 when she was promoted to head winemaker, leading her to foster a partnership with grape growers of Paicines AVA of San Benito County—one of the many fruit sources that now informs Smith & Hook’s notable taste.

This ruby-red blend of merlot, petite syrah, malbec, and cabernet sauvignon is made from grapes grown across three appellations of the Central Coast: Arroyo Seco, Santa Lucia Highlands, and San Antonio Valley. It’s a luscious and rich wine full of black cherry, blackberry, cocoa bean, and cola aromas while the palate is rich with dried cherries, bramble berries, and just a wee bit of slate surfacing in the silky finish.

Home Videos The WORLD of WINE – Wine News. Cheap wine, tasting notes and cooking with wine The World of Wine – May 2021 … END_OF_DOCUMENT_TOKEN_TO_BE_REPLACED

How to visit Napa Valley on a Budget. In this video Carson and I explain a few ways to enjoy Napa on the cheap. Tip and advice about how to visit Napa … END_OF_DOCUMENT_TOKEN_TO_BE_REPLACED

Home Videos Get To Know Argentina Wine | Wine Folly If you love Malbec, Argentina is your ultimate wine region. But that’s not … END_OF_DOCUMENT_TOKEN_TO_BE_REPLACED