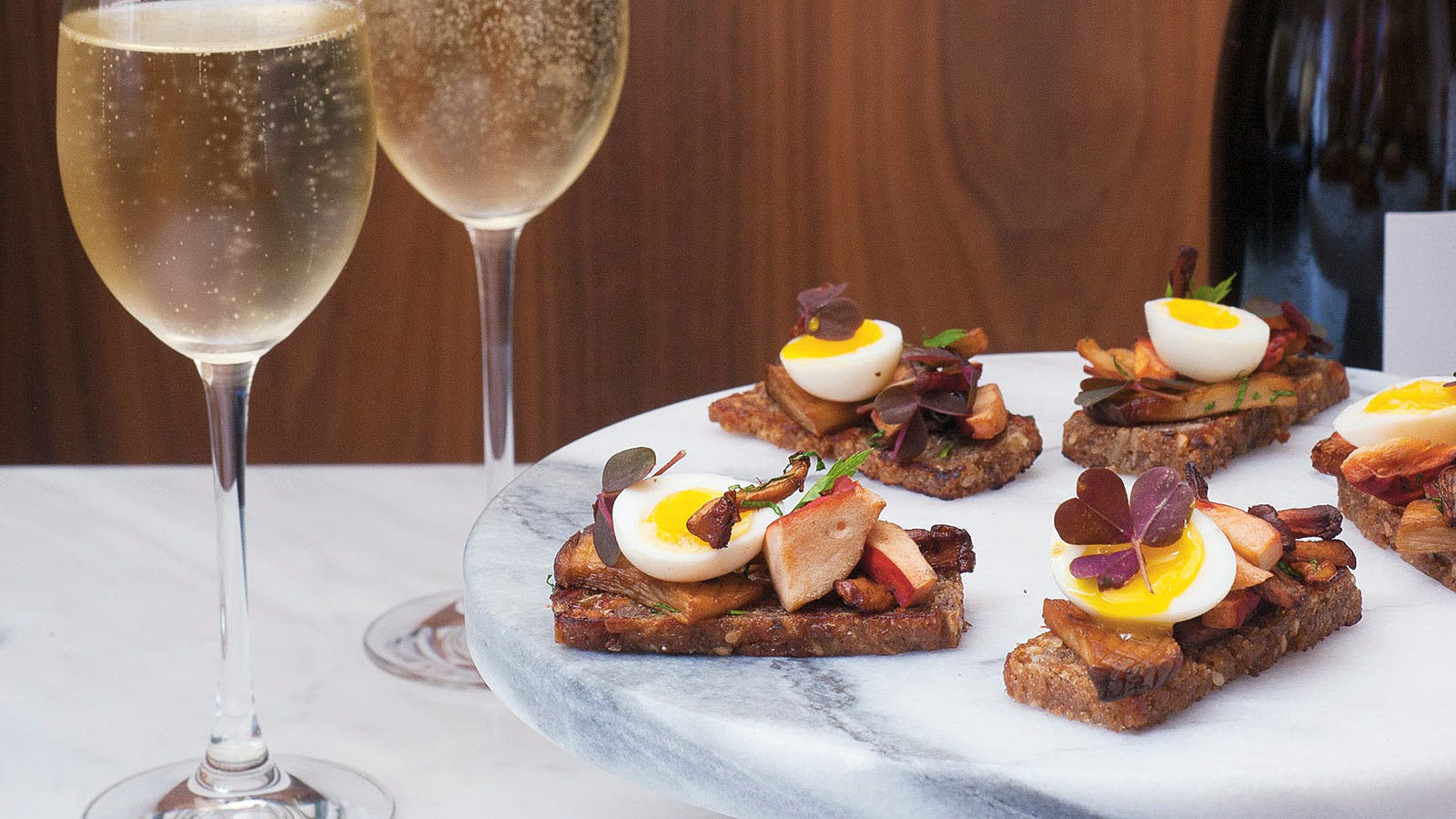 In a perfect world, we’d all have sparkling wine every day, right? Five o’clock comes and with it a POP. Failing that, we can at least mark special occasions—like Fridays, for example—with bubbles.

Many celebratory occasions have traditional foods tied to them, and Valentine’s Day is no exception. You’ve got to have chocolate. But what to eat before the chocolate? My feeling is that lighter foods are good so that you save room for dessert and stay limber. And not only is sparkling wine a great food accompaniment, it’s also so buoyant and happy-making and convivial that it suits the day. Below are five dishes—canapés, starters and small plates—paired with various bubbly styles to keep your Valentine’s evening light so you can concentrate on the main event. No, no, I mean the chocolate.

Serving Champagne and canapés together is a classic move to start a special meal. A few years back, New York Scandinavian restaurant Aquavit created an all-canapé menu for us to show off the range of styles in these sparkling wines and their respective, and somewhat elevated, food matches.

Chef Emma Bengtsson, whose calm, controlled demeanor stands out in the stressful environment of pro kitchens, gave us recipes with great twists that nudged our expectations for the wine: scallops with white soy, strawberry, trout roe and apple granita, along with duck with pickled cauliflower. But this one could not be more direct. It comes from foraging season in western Sweden where she grew up, so has a strong pull for her. Mushrooms are sautéed until crisp (don’t stir them too much or they won’t crisp up), then put on rye toasts and topped with halved quail eggs and parsley. That’s it. The dish brings together woodsy mushrooms, light spice in the bread, a bright herb and a rich egg. It’s perfect with the creamy Marc Hebrart Brut Selection NV, which is a little earthy from its hefty percentage of Pinot Noir. Try the recipe, or all three for a private mini-tasting party.

Boston-based Legal Sea Foods has impressed me since my wife and I first went when our now 18-year-old son was about nine months old. People pooh-pooh it because it’s a chain (today numbering 30-odd locations), but to my eyes they use their buying power to ensure tip-top quality at a good price, and they’ve invested in and promoted wine for decades.

So I was very excited to put together a menu story with them a few years ago, and to go up the coast from Boston to oversee the photo shoot. The location was the beautiful waterfront home of president and CEO Roger Berkowitz and his wife, Lynne, on a spit of land called Nahant. Berkowitz’s grandfather had opened a grocery store called Legal Cash Market in 1904, and his father opened the fish store in 1950. It’s where Julia Child shopped, including for the famously ugly monkfish; she also gave advice on the wine list in the early days. A restaurant followed, and Roger took it over and grew it considerably after business school. (In December, Berkowitz announced that he had sold the restaurant side of the business but was retaining retail and online sales.)

The menu, by chef Rich Vellante, was straightforward, but with great touches like the fatback in this recipe. The clam chowder is simply classic; the radishes can awaken the appetite before the soup or brighten the palate after the creamy indulgence. Either way, pour Champagne. Vice president of beverage operations Sandy Block chose an excellent non-vintage brut with broad appeal, the Taittinger La Française, to pair with this satisfying soup.

You know the old saying that a restaurant had a wine list the size of a phone book? Well New York’s Cru, now closed, had a wine list the size of two phone books and the excellence of its cellar earned it a Wine Spectator Grand Award. When putting together matches for a Chardonnay menu for us, wine director Robert Bohr and sommelier Michel Couvreux pulled from some 4,500 selections.

The first wine up was a Billecart-Salmon Blanc de Blancs 1996 with a luxuriant texture. Chef Shea Gallante served marinated, dressed raw scallops. The accompaniments may sound surprising, but preparation is fast and easy (just make sure you have yuzu, mustard oil and shiso leaves on hand) and the flavors really ping around. As Gallante pointed out in the story, people want rich food with Champagne, but that doesn’t have to mean fat; raw scallops do very nicely.

Although the restaurant closed, the story has a happy ending, illustrating how the hospitality business has its own sort of family tree: Bohr and chef Ryan Hardy founded Delicious Hospitality Group, which has three great restaurants in New York. Couvreux is beverage director for Thomas Keller’s New York restaurants, including Grand Award-winning Per Se. And Gallante is now chef at Lincoln Ristorante, a Best of Award of Excellence winner. Although you might not be able to dine at these spots right now, the former team’s scallops and Champagne match will certainly stimulate your desire.

A fruit-forward Prosecco or California sparkling wine plays off the earthy spinach in these appetizer-size quiches. (Andrew McCaul)

More than a decade ago, my friend and co-worker Jennifer Fiedler started a series called 8 & $20, with a recipe with no more than eight ingredients (plus pantry staples) and wines to match costing under $20. It had a fresh appeal and was informed by her serious cooking skills and fun writing. Fiedler returned to Hawaii, where she grew up, and is raising two adorable kids there while also writing and baking. The column continues.

Like omelettes and risotto, quiche is a really good thing to master, and not difficult at all. It can be baked ahead of time, and you can offer it as a whole for a meal or brunch or as mini quiches for a party. (This version of the recipe serves 8 to 10 as appetizers, so if you’re actually having a romantic dinner for two instead of feeding your family unit while stuck at home, any leftovers will keep a few days in the fridge.) Just as you can adapt quiche to the ingredients you have on hand, you can also adapt the wines. Fiedler recommended a fruity bubbly like Prosecco or California sparkling, which makes sense to play against the earthy spinach. And bubbles are always good with eggs.

An olive oil cake gets a lift from lemon in the batter and tequila in the glaze; a lightly sweet Moscato d’Asti balances this dessert. (Evi Abeler)

When he was 17, Victor Flores took a big leap. He moved to New York from Mexico by himself, with no family waiting for his arrival here. As he recalls, “I knew somebody who knew somebody.” He had a place to stay for a bit, and plans to work in construction. But the harsh winter of 1989 put a damper on that plan. Flores found a job washing dishes at Orso, an Italian restaurant in the Joe Allen family of Theater District mainstays run by Allen’s daughter, Julie Lumia, whom he considers his mentor. By 2000, Flores was running the kitchens at Orso and Joe Allen, and an outpost in Maine that has since closed. He also runs Bar Centrale, a secret spot so pleasant that I hesitate to mention it.

In an age of niche chefs (ya gotta have a gimmick), Flores is a breath of fresh air. He cooks confidently in a number of idioms for varied crowds. No preparation is beneath him, and yet he brings something to standard dishes and innovations. He’s direct and economical with language, and he has as sweet a disposition and is as accessible as any chef I’ve ever written about. (I recently texted him to ask if he puts garlic in guacamole. He responded “No.” Then about five minutes later, he sent a flurry of acceptable additions followed by a reminder: “no garlic.”)

Flores did a holiday menu for Wine Spectator that crossed Asian and Mexican flavors with tuna and gently spiced up a massive prime rib roast. For dessert, he topped a super-moist olive oil cake with a tequila glaze. It’s a subtle touch; you might not even identify the tequila if you didn’t know it was there, but it cuts the sweetness and lifts the oil flavor. Lightly sweet bubbles, in this case a Moscato d’Asti chosen by Flores, fit the bill for this recipe match.

Home Videos The WORLD of WINE – Wine News. Cheap wine, tasting notes and cooking with wine The World of Wine – May 2021 … END_OF_DOCUMENT_TOKEN_TO_BE_REPLACED

How to visit Napa Valley on a Budget. In this video Carson and I explain a few ways to enjoy Napa on the cheap. Tip and advice about how to visit Napa … END_OF_DOCUMENT_TOKEN_TO_BE_REPLACED

Home Videos Get To Know Argentina Wine | Wine Folly If you love Malbec, Argentina is your ultimate wine region. But that’s not … END_OF_DOCUMENT_TOKEN_TO_BE_REPLACED