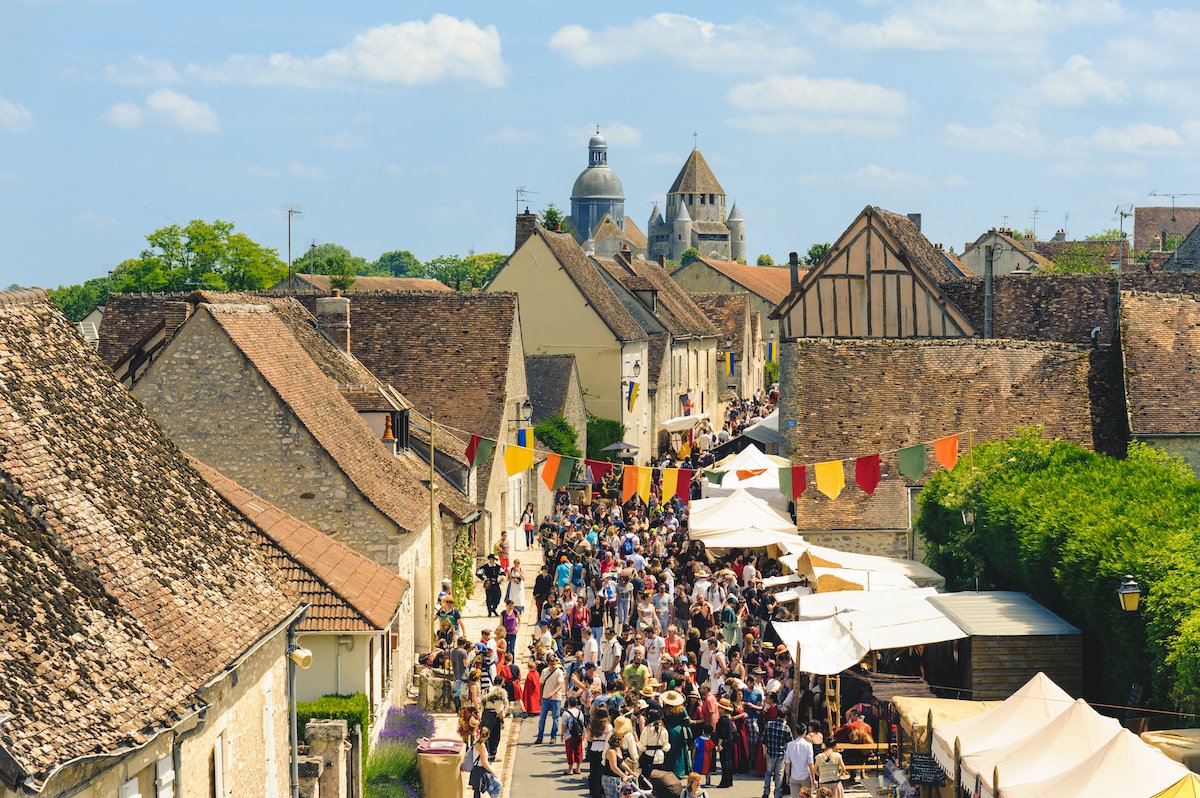 Summer in France means the French are on their vacances (vacations) and are eager for fun activities and celebrations. A bevy of cultural, music, theater, wine, nature, and food festivals happen throughout France during the summer months, so come join the French during the festivities.

We have selected an eclectic range of festivals to tempt you to visit France.

Avignon, the ancient city and the gateway to the Provence region, hosts one of France’s most significant cultural festivals, the Avignon Festival. Now in its 75th year, the festival was inaugurated in 1947 by French actor and director Jean Vilar and has become the largest arts festival in France. The festival presents over 50 shows from France and abroad along with 400 events including theater, dance, film, art exhibitions, panels, and readings, and many of them are world premieres. There are over 40 indoor and outdoor venues throughout the city that range from the massive courtyard of the Palace of the Popes, to a gymnasium, to an intimate garden in a former mansion.

The dates for the 2021 edition of the festival are July 5 to July 25. There’s an exciting lineup of performances including The Cherry Orchard, Hamlet, a version of Pinocchio, and a modern dance piece by choreographer Jan Martens.

Located just behind the Pope’s Palace in a limestone structure from 1309 housing visiting popes, Hotel La Mirande is a five-star boutique hotel lavishly decorated with antiques. Splurge and have lunch or dinner in the garden surrounded by olive and fruit trees, white canvas umbrellas, and sage green wicker chairs. The Michelin-star restaurant is headed by chef Florent Pietravalle, who prepares a choice of a four, six, or nine-course meal.

L’Epicerie is a delightful cafe and restaurant with a sizeable outdoor terrace on a quiet, narrow street, serving classic and contemporary French cuisine.

The old quarter of Avignon has uneven cobblestones and can be a bit treacherous to walk on at times, so make sure to wear enclosed shoes with rubber soles or sneakers. Temperatures can get into the 90s Fahrenheit in summer, and some places don’t have air conditioning.

Much like a Renaissance Fair, the Provins Medieval Festival is where locals dress up in medieval period costumes. Just 90 minutes by train from Paris, Provins is a protected medieval village and a UNESCO World Heritage site. There are historical reenactments including Champagne fairs and trade fairs from the 12th century. Street entertainers, buskers, jugglers, and acrobats line the streets, and there’s also a marketplace where craftspeople and merchants display and sell spices, period jewelry, and medieval musical instruments. Kids are also included in the fun, and there are cool activities and games. If you are game, dress up like the locals and wear a medieval outfit.

Located in the old quarter of the city near the ramparts, Hotel Aux Vieux Remparts is an updated antique inn with modern conveniences such as air conditioning, an indoor swimming pool, spa, and an indoor and outdoor restaurant.

If you want to experience an authentic medieval tavern, Banquet des Troubadours is a restaurant located in a 12th-century vaulted cellar. It serves a medieval banquet with roasted pig and chicken, unlimited red wine, and brie cheese while being entertained by storytellers, jugglers, and acrobats while you dine.

Provins is an easy day trip from Paris, and trains leave almost every hour.

The Lavender Festival in Digne-les-Bains, in the upper part of Provence, celebrates the blooming of the iconic French lavender plants and fields. Beginning in 1929, it was the start of promoting the fragrant lavender from the Provence region. The 5-day fair takes place at the end of July, which is the height of the lavender season. Events include a parade with floats smelling of lavender and locals wearing folk costumes, an international folk dancing event, a ball taking place in the main town square, Place General de Gaulle, and sparkling fireworks. Other sites and activities in Digne-les-Bains include the healing thermal waters, gardens, architecture, and art museums.

A family-run hotel since 1993 in a 19th-century house, Villa Gaia Hotel and Pension is set in a country garden. The three-star hotel has reasonable rates starting at under 100 euros a night for a double room, and single rooms are also available. The owners Anne-Francoise and Georges-Eric run a restaurant serving organic food specializing in the slow cooking method.

Located inside the elegant Le Grand Paris Hotel, the restaurant offers a pleasant mix of Provencal and Mediterranean dishes such as duck with apricot fondue, cod and potato gratin, and a warm lime souffle.

Housed in a genuine Roman arena from the first century, the Choregies d’Orange is the oldest cultural festival in France, dating back to 1869. The outdoor festival consists of mostly opera and classical music, but they have also added film and dance performances to the program.

The dates for the 2021 festival are June 18 to July 31. The impressive program includes Cecelia Bartoli and Musicians of Prince-Monaco, the Bejart Ballet Company, a Night of Italian music from the La Scala opera house in Milan, a screening of the classic Charlie Chaplin film, The Kid, and the opera Samson and Delilah.

Local-born chef Nicolas Jay helms the kitchen at Le Parvis with delectable dishes such as risotto with sea scallops and asparagus, foie gras, filet mignon with peppercorns, and floating island for dessert.

Oenophiles rejoice! Here’s a reason to plan a special trip to France: The Bordeaux Fete De Vin/Bordeaux Wine Festival. For four days at the end of June, this special festival celebrates wine from one of the best wine regions on the planet, Bordeaux. There are 10 wine tasting centers along a river walk which include Medoc, Saint Emilion, Sauternes, and Rose wines, among others, representing over 1,200 winemakers who produce wine from the Bordeaux and Nouvelle Aquitaine regions. We recommend purchasing a tasting pass that includes a tasting glass with a carrying case, 11 wine tastings, a tasting workshop, a public transport pass, plus lots of extras. The cost of the pass is 16 euros if purchased before June 7th.

A former mansion lived in by a wealthy family has been converted into a luxury boutique hotel with contemporary decor. Le Palais Gallien also boasts a swimming pool, something almost unheard of in the center of Bordeaux, and haute cuisine restaurant Le Table de Montaigne.

The renaissance of great food in Bordeaux in recent years now matches the high quality of its wine.

Even though Bordeaux is inland, Le Petit Commerce serves some of the freshest seafood in the area, specializing in local oysters, which you can eat on the spot at their retail shop or have them presented at the table in the restaurant across the street. You can also enjoy just-caught lobster, turbot, haddock, sole, and Atlantic salmon at the brasserie-style dining room.

Don’t leave Bordeaux without tasting a canele, a pastry baked in a cylinder shape, filled with custard, rum, and vanilla and caramelized crust on the outside. Caneles Baillardran is a small chain of bakeries and the leading baker of caneles in Bordeaux, where they are continually baked on the premises all day long.

If you plan to attend any of the above festivals, it’s highly recommended to book your hotel and event tickets at least 4 to 6 months in advance.

Home Videos The WORLD of WINE – Wine News. Cheap wine, tasting notes and cooking with wine The World of Wine – May 2021 … END_OF_DOCUMENT_TOKEN_TO_BE_REPLACED

How to visit Napa Valley on a Budget. In this video Carson and I explain a few ways to enjoy Napa on the cheap. Tip and advice about how to visit Napa … END_OF_DOCUMENT_TOKEN_TO_BE_REPLACED

Home Videos Get To Know Argentina Wine | Wine Folly If you love Malbec, Argentina is your ultimate wine region. But that’s not … END_OF_DOCUMENT_TOKEN_TO_BE_REPLACED