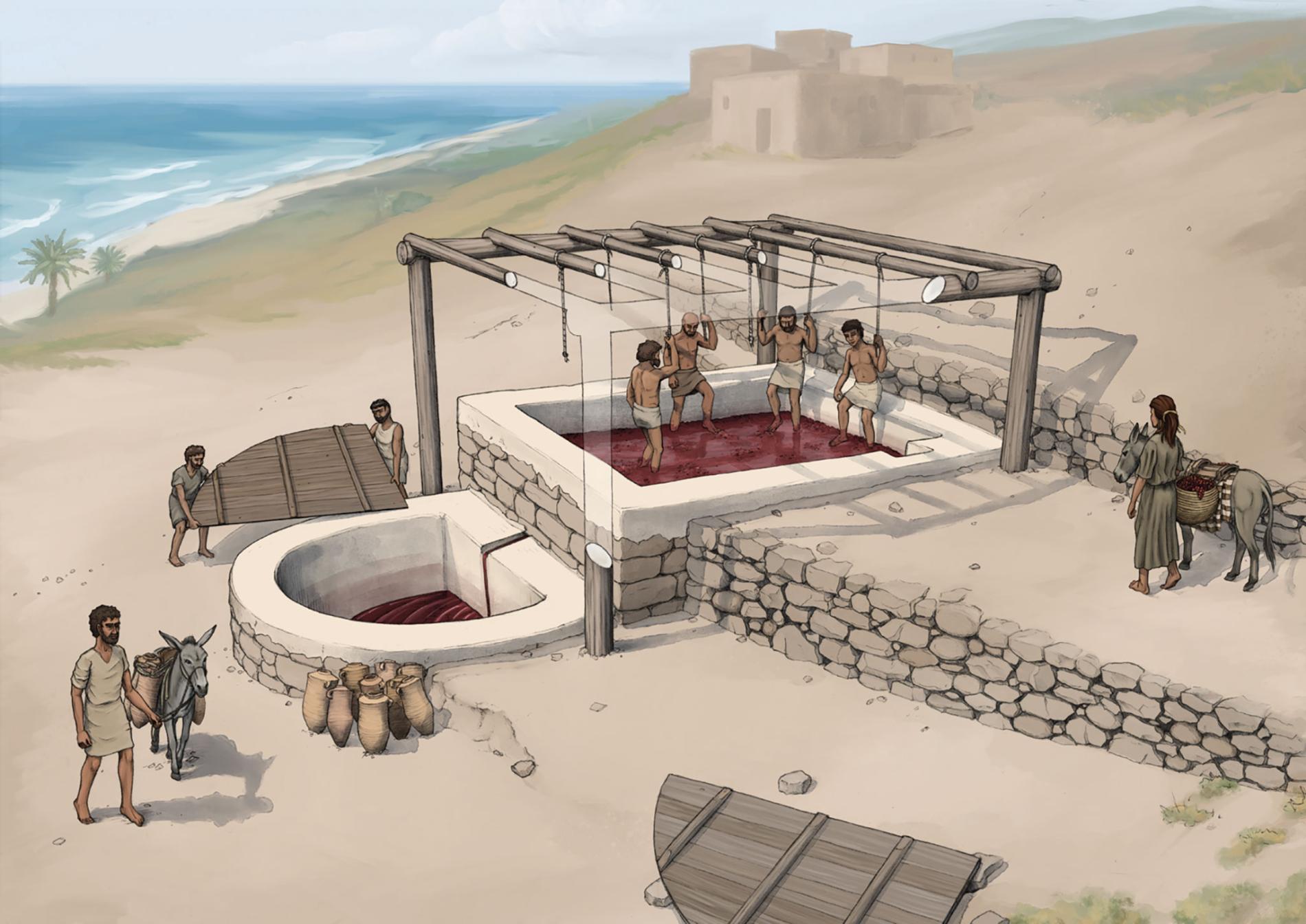 Archaeologists have unearthed new evidence of the extensive overseas trade in wine by the ancient Phoenicians, with the discovery of the oldest wine press in Lebanon.

The find sheds new light on winemaking by the Phoenicians, the seafaring merchants who introduced a culture of drinking wine throughout the ancient Mediterranean, and whose influence lives on in the beverage’s worldwide popularity.

Excavations at Tell el-Burak, about five miles south of the Lebanese coastal city of Sidon, have revealed the well-preserved remains of a wine press used from at least the seventh century B.C. It is the earliest wine press ever found in the Phoenician homelands, which roughly corresponded to modern Lebanon. The discovery is featured in a study published Monday in the journal Antiquity.

Large numbers of seeds show grapes were brought there from nearby vineyards and crushed by treading feet in a large basin of durable plaster that could hold about 1,200 gallons of raw juice.

The resulting “must” was collected in a large vat and stored in distinctive pottery jars known as amphorae for fermenting, aging, and transport. (Here’s how climate change is changing the flavor of French wine.)

The wine press was excavated along with four mudbrick houses at Tell el-Burak, part of a Phoenician settlement inhabited between the eighth and sixth centuries B.C. that was probably devoted to making wine for trading overseas, the researchers write.

“Wine was an important Phoenician trading item,” says Hélène Sader, an archaeologist at the American University of Beirut (AUB) and co-director of the Tell el-Burak Archaeological Project. Phoenician wine from the Sidon region was particularly famous and mentioned in texts from ancient Egypt, she adds.

But little evidence of Phoenician winemaking had been found in Lebanon itself, possibly due to the haphazard nature of archaeological excavations.

“The coast of Lebanon was never thoroughly surveyed, and very few sites with Iron Age [Phoenician] remains have been properly excavated,” Sader says.

Some similar winemaking sites, however, have been found on the northern coast of what is now Israel, which belonged at that time to the Phoenician kingdoms of Tyre and Sidon.

The Phoenicians didn’t invent wine—evidence of it from about 8,000 years ago has been found in the country of Georgia—but they spread winemaking throughout the ancient Mediterranean, along with olive oil and innovations such as the alphabet and glass.

The ancient seafarers introduced vineyards and wineries to their colony cities in North Africa, Sicily, France, and Spain. And they made it popular through trade with ancient Greece and Italy, where wine from wild grapes was known at the time but not so highly developed, says University of Toronto archaeologist Stephen Batiuk, who was not involved in the research. (Discover how alcohol has fueled the development of arts, language, and religion.)

“The Phoenicians perhaps introduced a drinking culture, [new styles of] drinking vessels, and a different way of relating to wine,” he says.

The Phoenicians’ love of wine extended to their religion, and its ceremonial use was reflected in other Near East religions as well.

University of Pennsylvania archaeologist Patrick McGovern, an expert in ancient winemaking who was not involved in the latest study, explained that the Phoenicians were descended from the Canaanites, a Bronze Age people who were also predecessors of the Israelites.

“Wine was the Phoenicians’ principal beverage for sacrifice,” he says. “But that was occurring already with the Canaanites, and it was passed along into Judaism and Christianity.”

McGovern speculates that Tell el-Burak may even have supplied some of the hundreds of amphorae on two Phoenician shipwrecks off Ashkelon in Israel, which date from around the same time.

“We did an analysis on several of the amphorae, and it was wine,” he said. “Maybe these vessels were coming from there.”

The Tell el-Burak project is a joint effort by an AUB team and archaeologists in Germany who have studied the site since 2001, although there’s been no work at Tell el-Burak for the past two years due to Lebanon’s economic difficulties, says Sader.

Home Videos The WORLD of WINE – Wine News. Cheap wine, tasting notes and cooking with wine The World of Wine – May 2021 … END_OF_DOCUMENT_TOKEN_TO_BE_REPLACED

How to visit Napa Valley on a Budget. In this video Carson and I explain a few ways to enjoy Napa on the cheap. Tip and advice about how to visit Napa … END_OF_DOCUMENT_TOKEN_TO_BE_REPLACED

Home Videos Get To Know Argentina Wine | Wine Folly If you love Malbec, Argentina is your ultimate wine region. But that’s not … END_OF_DOCUMENT_TOKEN_TO_BE_REPLACED