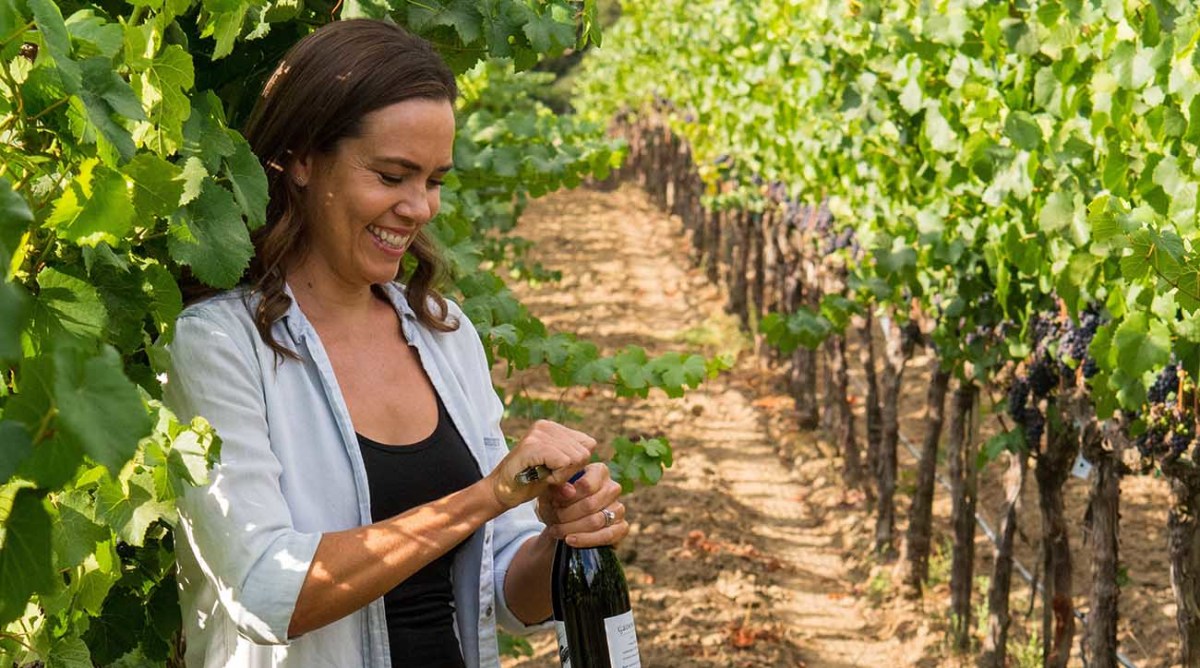 Natalie Coughlin’s approach to her wine label is hands-on. The former Olympic swimmer does everything from sampling grapes to designing imagery for the bottles. But “hands-on” is literal, too: Now in her fourth year of harvesting and production, Coughlin has learned that her favorite part of winemaking involves physically diving in.

It’s called punching down. While Pinot noir grapes are fermenting in bins, they must be vigorously stirred down, or “punched,” two or three times a day. It’s common for wineries to do this with some form of equipment—both because it’s strenuous (at least twice a day every day) and because it’s physically challenging (not everyone is able to stir through four feet of grapes without assistance). For Coughlin, however, it’s simply a joy.

“You’re kind of swimming through the wine just with your arms,” Coughlin says. “And as a swimmer, of course, I have really long arms. It’s perfect.”

It’s like a swimming drill, she says, with the extra step of sanitizing her arms from shoulders to fingertips before she dives in. And it’s just one way that her second career has felt as natural to her as her first.

Coughlin—whose 12 Olympic medals, earned from 2004 to 2012, have her tied for the most decorated female swimmer of all-time—grew up around wine. Her family lived close to Napa Valley, and her parents loved going to wine tastings, a habit that Coughlin picked up herself after she turned 21. As often as possible, she planned for a nightly glass of wine, even with the demanding requirements of life as a professional swimmer.

“I just loved the process of it,” she says. “I loved the entire ritual of drinking wine—similar to coffee, just like I love the ritual of making my coffee every morning, I love having a glass of wine with dinner, and so I saw it as something I could do in moderation while training.”

She didn’t ever plan for her love of wine to become a job. But she had always been vocal in her admiration of the wine career of a close friend, Shaina Harding, who’d worked her way from cellar rat to associate winemaker. And when Harding decided that she was ready to embark on her own wine label in 2017, after Coughlin had stepped away from competitive swimming, she thought that she could have found an ideal partner for the business.

“I said yes, immediately, without knowing what that would mean,” Coughlin laughs. “That’s kind of my style—and maybe that’s where sports come in, swimming has given me such confidence that, maybe stupidly, I’ll accept an opportunity like that and figure it out as I go.”

Harding guessed that the pair might make a good fit. She had the technical expertise, and Coughlin had the promotional skills, honed over her years as a professional athlete. “I’d never managed my personal brand or anything like that,” Harding says, “But Natalie’s been doing that since she was a teenager.” The pair decided to name the label Gaderian Wines, after an Old English word meaning “to gather,” and off they went.

The first step for Coughlin was a formal wine education, enrolling in classes at the University of California, Davis, on viticulture and enology. But the bulk of her subject-matter knowledge came from working alongside Harding—asking her business partner to treat her “like an intern” as they got their label off the ground and soaking up as much as she could.

“There’s only so much you can read or learn from a book,” Coughlin says. “You really have to learn by doing it, and the wine is—it’s alive. When you’re making it, it’s bubbling, it’s making noises, smells are coming off of it, it’s all so different as the process goes on.”

Engaging in each step of that process has taught Coughlin to enjoy wine in a new way. Her experience from years of tastings had made her a relatively educated drinker, but it wasn’t until she began making wine herself that she learned just how the taste develops over the various stages of production, and how different it might be from one harvest to the next. “Like our 2019 Chenin Blanc had all these wonderful pineapple notes—just as a result of how things ripened that year and the growing conditions—and the 2018 had been great, but we’d made it exactly the same, used the same fruit, and it came out differently,” she says. “That’s kind of the fun of all this.”

The actual production, of course, is only half the battle. The rest comes in packaging and promoting—where they’ve tried to position the label as open and approachable, writing their wine descriptions in the language of a friend giving a recommendation, and granting peeks of their own friendship from behind the scenes.

“I think, maybe, I wasn’t quite sure how detail-oriented she was going to want to be with the production and the labels and the photographs, but she’s been so into crafting the brand and all those subtle details,” Harding says. “Natalie’s just as fiercely competitive in the wine industry as she was when she was a swimmer.”

Coughlin and Harding remain the only two full-time employees for Gaderian, happy to keep the label relatively small. But 2020, unsurprisingly, has been tricky. Smoke from the California wildfires damaged their fruit. COVID-19 affected restaurant and retail distribution. And Coughlin also faced a happier sort of obstacle: Pregnant this summer, she could taste the wine that was in production only by sampling it and then spitting it out. (She gave birth to a son, her second child, in October, and finally was able to open her first bottle of new product in November.) But they hope to pick back up at full speed in 2021.

“It’s just one of my passions,” Coughlin says. “I’m hands-on because I love this.”

Even when it means a shoulder-deep swim into fermenting grapes.

Home Videos The WORLD of WINE – Wine News. Cheap wine, tasting notes and cooking with wine The World of Wine – May 2021 … END_OF_DOCUMENT_TOKEN_TO_BE_REPLACED

How to visit Napa Valley on a Budget. In this video Carson and I explain a few ways to enjoy Napa on the cheap. Tip and advice about how to visit Napa … END_OF_DOCUMENT_TOKEN_TO_BE_REPLACED

Home Videos Get To Know Argentina Wine | Wine Folly If you love Malbec, Argentina is your ultimate wine region. But that’s not … END_OF_DOCUMENT_TOKEN_TO_BE_REPLACED