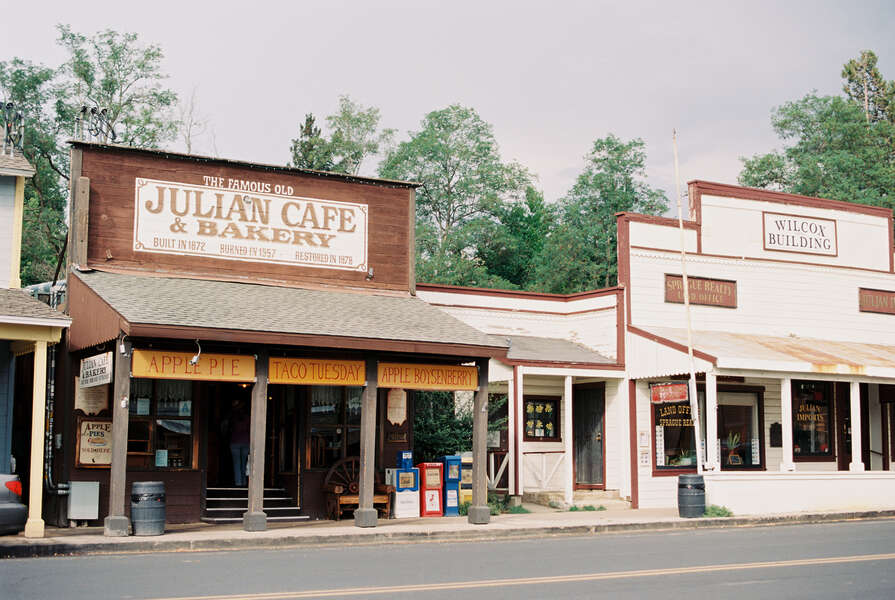 Nestled in the Cuyamaca Mountains about an hour northeast of San Diego and two-and-a-half hours southeast of Los Angeles is the tiny town of Julian, California, population 1,502 (2010 census). Julian was formed in 1869, when Confederate soldiers and cousins Mike Julian and Drury Bailey settled in the area, hoping to strike gold. Named in honor of Mike Julian, the town experienced an almost immediate increase in population with the discovery of gold in a nearby stream by former enslaved cattleman, A.E. “Fred” Coleman in 1870—spurring San Diego’s first and only gold rush that lasted until about 1900. A bronze plaque near Town Hall commemorates the city’s early Black history, as Julian once boasted the majority of San Diego’s Black population: in the 1880 census, 33 of 55 Black residents living in San Diego County lived in the Julian area.

Around that same time, another enterprising gentleman, James Madison (not the fourth president), brought a wagonload of young apple trees to the area. The trees flourished in the mountain environment and became one of the top reasons people from all over SoCal continue to visit Julian today.

While all things apple-related have been a major draw since the gold rush ended, more recently Julian has become a haven for San Diegans and Angelenos looking for a relaxing getaway and jumping off point to other activities like hiking, stargazing, and wine tasting. With a friendly, small town feel, four distinct seasons, and a calendar full of things to do, Julian is perfect for a quick weekend escape or a longer stay. So pack a bag, grab the sunscreen and hop in the car—we’ve got all the best things to do in Julian right here:

Julian Hotel
Julian is an official California Historic Landmark, meaning that any new development must adhere to certain guidelines that preserve the architectural integrity of the town. Once you get settled in, familiarize yourself with the town with a self-guided walking tour and explore Julian Town Hall, several historical homes, and the Pioneer Cemetery. The Julian Gold Rush Hotel, formerly known as the Robinson Hotel, was one of the first businesses in San Diego County to be owned and operated by African Americans and is the oldest operating hotel in Southern California. Scope out the best pie shops and plan the rest of your culinary adventures accordingly.


This challenging 4.1-mile out-and-back hike in the Cleveland National Forest begins with a two-mile, 980-feet descent that includes some bouldering, climbing, and traversing before you reach the sparkling falls and pools. Climb up to the top falls or scramble on the boulders and rock faces either before you go for a swim or after you dry off—the polished rock walls and boulders can be slippery. Bring some snacks so you can fuel up after you take a dip, and save plenty of water (and time) for the return trip, which is two miles uphill, remember?

An outstanding collection of historical artifacts make the Julian Pioneer Museum a must-stop for history buffs. The museum provides a narrative of Julian history from 1869 to present day, with Native American artifacts, antiques, and mounted animals that represent the area’s biodiversity,  Visit to see how local Indigenous groups and pioneer settlers lived and worked, all within the walls of the restored Treshil Blacksmith Shop.

The pie options are fire

It’s a given that you’ll be eating pie at some point during your visit, and you have plenty of places to choose from. The biggest name in town is Julian Pie Company, and yes, you can buy their pies in any Vons, but there’s something special about being at the flagship shop. Apple Alley Bakery turns out a spectacular apple pecan pie with a crunchy crumb topping, Julian Cafe and Bakery’s boysenberry-apple is the perfect mix of sweet and tart, and Juliantla Chocolate Boutique covers cinnamon-scented caramelized apples in a flaky crust that’s also completely vegan.
Away from the glow of city lights, the night skies of Julian give visitors a magnificent view of the Milky Way, planets, and constellations. As a designated Dark Sky Community, it’s one of a diminishing number of locations that take active measures to avoid nighttime light pollution. Amateur astronomers will want to book a Sky Tour at Observer’s Inn, where you’ll use research-grade telescopes to view planets, open star clusters, nebulae, star systems, and the moon. Plan a visit around upcoming celestial events for an unparalleled look at the heavens!

Stonewall Peak Trail in Cuyamaca Rancho State Park, just 10 miles outside of Julian, offers spectacular vistas and ever-changing vegetation along its 3.4-mile out-and-back course. Thanks to a series of gentle switchbacks up a mere 830 foot elevation gain and plenty of shade from the beautiful forest setting, hikers of almost any skill level can hit the summit for 360-degree views of Lake Cuyamaca and the park.

Founded in 1977, the California Wolf Center is a nonprofit committed to the recovery of endangered wolves in the wild. It’s home to several gray wolf packs, including one of the rarest and most endangered species, the Mexican gray wolf. Reservations are required to visit, so schedule one of three different tours to learn about wolf conservation and meet with the wolf packs.

Tucked into the base of Volcan Mountain at just above 4,000 ft elevation, Menghini Winery is the oldest winery in Julian and the second oldest in San Diego County. Located just two-and-a-half miles outside of town, the winery is a small-batch operation that produces Sauvignon Blanc, Chardonnay, Riesling, Rosé, Cabernet Sauvignon, Merlot, and Syrah. Their tasting room is open seven days a week and visitors are welcome to bring a picnic lunch to enjoy on their expansive grounds.

Oasis Camel Dairy
One of the more unexpected farms in the Julian area is Oasis Camel Dairy, home to free range, pastured camels and their calves. The camels are hand-milked, but due to state regulations prohibiting the on-site sale of camel milk, yogurt, or cheese, it’s instead turned into luxurious camel milk soaps, bath bombs, and lotions as well as decadent chocolate bars made by chocolatier Al Nassma in Dubai. Private tours are available by appointment, and you can purchase their camel milk products in their gift shop.
Miner’s Diner

One of the great things about being an adult is that if you want ice cream for breakfast, you can have it. That’s not to say the classic diner fare at Miner’s Diner and Soda Fountain isn’t just what you’re craving — stacks of pancakes, eggs and bacon for breakfast, burgers, dogs and melts for lunch, but before you order anything, check out the “Fun Stuff” portion of the menu, where you’ll find old timey treats like phosphates, ice cream floats, thick shakes and malts, banana splits, and yes, apple pie.

Not all the apples grown in Julian are destined for pies; at Calico Cidery they’re combined with just one other ingredient, native yeast, and fermented into refreshing, bone-dry hard cider. Made with apples and pears grown exclusively on their ranch, they usually have four or so varieties available on tap for sipping under the shade of huge oak trees. During the fall you can visit their ranch for u-pick apples. Fun fact: It was on the property of Calico Ranch that Fred Coleman first discovered gold in 1870, sparking the Julian gold rush.

Sign up here for our daily San Diego email and be the first to get all the food/drink/fun in town.

Mary Beth Abate is a San Diego-based freelance writer by way of Chicago and Los Angeles. Her hobbies include yoga, pickling and fermenting stuff, reading cookbooks and drinking fabulous gin. Keep up with her experiments @MaryBeth_Abate.

Home Videos The WORLD of WINE – Wine News. Cheap wine, tasting notes and cooking with wine The World of Wine – May 2021 … END_OF_DOCUMENT_TOKEN_TO_BE_REPLACED

How to visit Napa Valley on a Budget. In this video Carson and I explain a few ways to enjoy Napa on the cheap. Tip and advice about how to visit Napa … END_OF_DOCUMENT_TOKEN_TO_BE_REPLACED

Home Videos Get To Know Argentina Wine | Wine Folly If you love Malbec, Argentina is your ultimate wine region. But that’s not … END_OF_DOCUMENT_TOKEN_TO_BE_REPLACED