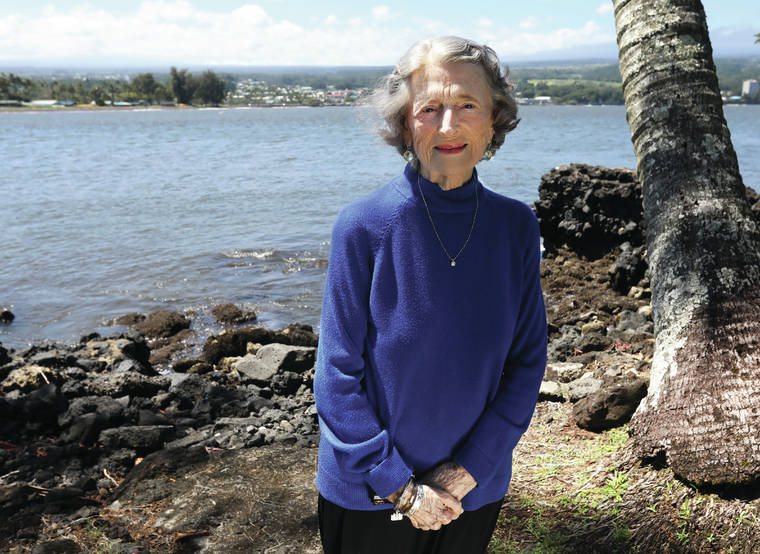 The Hilo Woman’s Club will be celebrating its centennial anniversary after 100 years of serving the community.

The Hilo Woman’s Club organized in January 1921 with more than 50 tenacious women who were determined to unite around common causes.

The three areas they chose to focus on were outdoor improvement, the study of civic problems and literary study, all of which have been expanded through the years to meet the changing times.

The club is deeply steeped in Hilo’s history, and its archives go back its entire 100 years.

Tree plantings throughout Hilo, including the pink shower trees at Kapiolani School and the coconut trees at Hoolulu Park, are legacies of the woman’s club. It also sponsored the collection of funds to develop Lili‘uokalani Gardens and donated a Japanese pagoda.

In May 1956, the club opened the Pink Elephant Thrift Shop, which operated for 50 years, with the funds being used for scholarships, community projects and donations.

At the height of its popularity in the late 1970s, the club charted more than 180 members.

In 1977, the club opened its own clubhouse, which is used as a meeting place and an event venue for the community.

Through the years, the Hilo Woman’s Club has remained committed to its purpose of promoting educational, social and civic development of its members and the community.

Beverly Heikes has been the president of the club for about 10 years — from 2008-16 and 2019 to present — and is spearheading current projects and the centennial anniversary.

“What I love about the club is the history of service to the community and the initiatives that were taken to make things happen,” Heikes said. “We’ve always gone out to look for needs in the community and find a way to raise money and provide funds.”

The woman’s club presently helps support nonprofits such as the Salvation Army, The Food Basket, the YMCA and many others.

Because of its modest annual membership cost, the club hosts annual events to raise funds for its charitable causes, which include a wine tasting in March, an Oktoberfest or themed dance in October and an occasional fashion show or musical event.

In December, the club puts on an annual Christmas party for families in need. The club produces a festive party, with Santa Claus and gifts for about 40 keiki each year.

Although all of the club’s events were canceled in 2020 because of the COVID-19 pandemic, the women still worked to raise money to help nonprofits in town.

“Instead of our regular Christmas party, we were able to donate over 100 toys to the Salvation Army for their Angel Tree program,” Heikes said. “We also helped gather bulk food items for The Food Basket for their food drops.”

In 1953, the woman’s club established a scholarship program for East Hawaii female high school students, which is ongoing today and is now open to males as well.

“There is not a lot we can do right now, but we’re always in the process of raising money for scholarships,” Heikes said. “We’ll probably be able to give out two this year.”

Many women have been part of the club for decades, including Virginia Maeda, the oldest and longest-standing member.

Maeda, 97, joined the club in 1964 after moving into her permanent residence in Hilo, and has never stopped volunteering.

Maeda’s late husband was the director of the Peace Corps training center on the Big Island, and the couple bought a house on Kinoole Street after falling in love with the area.

Maeda wrote the club newsletter for about 30 years, and she has worked as the corresponding secretary for the board on and off throughout her tenure.

“I like knowing everything that’s going on and helping with projects for the community,” Maeda said. “I guess I’m a people person, because I love being around this group of women and meeting new people through our work.”

Maeda has enjoyed establishing herself in the community and continuing to help those in need. She especially loves throwing the Christmas party for families every year.

“This is really good for me, and I’m glad I can still be a part of it at an older age,” Maeda said. “As long as I can walk, I want to keep helping.”

Dorothy Williams, a well-known entertainer on the Big Island, has been part of the club since she moved to Hilo in 1976.

“I’ve loved helping seniors learn new things and keeping them entertained and well,” Williams said. “I’ve learned so much through volunteering, and this is something I want to keep doing until I die.”

Williams, 95, who has been the longtime president of the Pomaikai Senior Center, has never missed a club function and has planned many events and volunteer efforts through the years.

“I love to participate in anything and everything we’ve done as a club,” she said. “Donating time and money back to the community has given me perspective I would not have without it.”

Williams deems herself the jack-of-all-trades maintenance woman after completing many projects at the club’s meeting place. She has tiled the floors, painted walls and patched holes throughout the building.

The next project Williams is going start will be to repaint the parking lot outside the clubhouse for a fresh look.

“If I wasn’t so old, I would probably try to do it myself,” she said. “But I want to get a group of us together to repaint the parking lot just to freshen it up.”

While Williams has had an exciting life as an entertainer, even making an appearance on “America’s Got Talent” five years ago, she has found happiness through her work in the Hilo community.

“This has been one of the longest things I’ve ever been a part of,” Williams said. “I’ve learned so much from the club and the people here. There is a harmony in Hawaii that you would never find anywhere else.”

The club is celebrating its 100th anniversary from 2-4 p.m. Saturday with a walk-though luncheon highlighting its rich history and remarkable legacy of community service.

For more information and to make reservation to attend this centennial celebration, call Heikes at 935-9838 by Thursday. Mask-wearing, social distancing and all COVID guidelines will be adhered to.

Home Videos The WORLD of WINE – Wine News. Cheap wine, tasting notes and cooking with wine The World of Wine – May 2021 … END_OF_DOCUMENT_TOKEN_TO_BE_REPLACED

How to visit Napa Valley on a Budget. In this video Carson and I explain a few ways to enjoy Napa on the cheap. Tip and advice about how to visit Napa … END_OF_DOCUMENT_TOKEN_TO_BE_REPLACED

Home Videos Get To Know Argentina Wine | Wine Folly If you love Malbec, Argentina is your ultimate wine region. But that’s not … END_OF_DOCUMENT_TOKEN_TO_BE_REPLACED