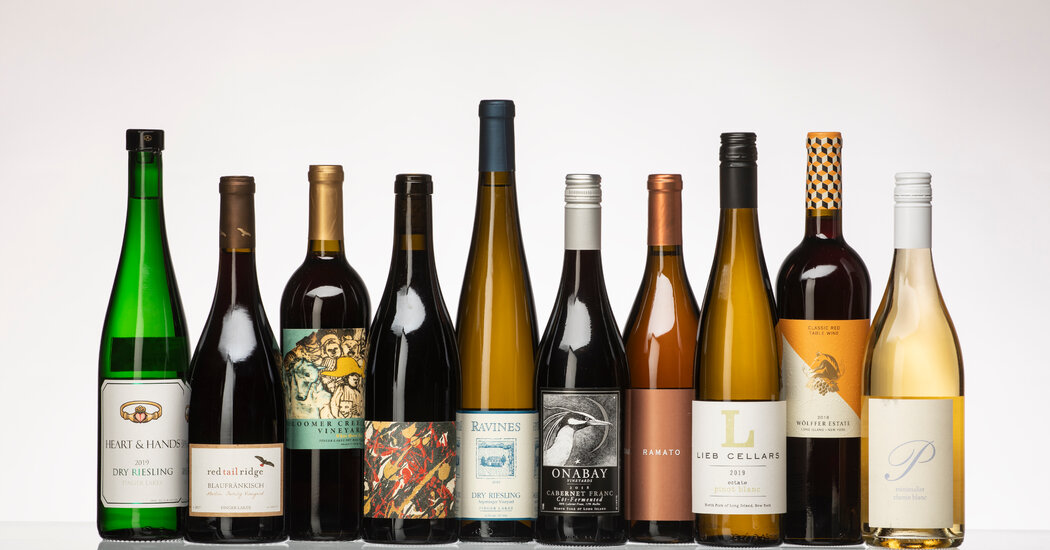 New York is the third largest wine-producing state in the country, after California and Washington. Yet it doesn’t get nearly the respect it deserves.

Not that its numbers mean a whole lot. But over the last 20 years, the quality of New York State wines has evolved rapidly, particularly in the two leading winemaking regions, the Finger Lakes and Long Island.

The Finger Lakes, in particular, has developed its identity as the leading cool-climate wine region in the United States, with exceptional, eloquent rieslings and expressive, graceful cabernet francs as the signature wines, although pinot noir may one day be a third leading variety.

Long Island’s progression has not been as smooth, with a few fitful starts in the direction of California’s once-dominant style of powerful fruit and too much oak. But Long Island’s maritime climate makes that style difficult to support. More producers in recent years have stepped off the accelerator and embraced more moderate wines, which seems far more in tune with what the region can offer.

On a digital shopping spree through some of Manhattan’s leading retail shops, I picked up these 10 New York gems, five from the Finger Lakes and five from Long Island. I could easily have picked 10 more.

The Finger Lakes has been especially exciting to watch. This historic wine region developed in the 19th century around native American and hybrid grapes. They were more adapted to the climate than the more familiar vinifera grapes, which include virtually all the familiar European wine grapes.

Some of those native wines became household names, like Manischewitz, the proverbial kosher wine made of the concord grape.

In the early 1960s, Dr. Konstantin Frank, a World War II refugee from Ukraine, demonstrated that vinifera grapes could withstand the cold climate of the Finger Lakes. Over the next few decades, his winery, Dr. Konstantin Frank, and a few other vinifera pioneers like Hermann J. Wiemer, preached the virtues of the Finger Lakes, often to an indifferent public.

But their work paid off, particularly in the last 20 years as dozens of younger producers have demonstrated how good the wines can be.

The new and improved reputation of the Finger Lakes rests on vinifera grapes like riesling and cabernet franc, but my guess is some native and hybrid grapes, like catawba, delaware and some not currently associated with the Finger Lakes, may eventually stake a claim as well, as serious producers demonstrate their worth.

Long Island’s wine-producing history dates back only to 1973, when Alex and Louisa Hargrave founded the first commercial vineyard and winery. For a region less than 50 years old, the progress has been quick as producers have come to understand the terrain and how best to farm it.

A lot is left to learn. Long Island producers are still determining which varieties do the best, and two of my favorite skilled and experimental producers are no longer there. Shinn Estate was sold a few years ago and has transitioned to Rose Hill Vineyards — I have yet to see or taste the wines — and Southold Farm and Cellar was forced out in a zoning dispute.

Still, I find a lot to like in Long Island wines. Aside from the five producers in my selection, keep your eyes open for Macari, Bedell Cellars, Anthony Nappa, McCall and Lenz.

From the Finger Lakes keep an eye out as well for Konstantin Frank and Hermann J. Wiemer, both under new leadership, Forge Cellars, Empire Estate, Keuka Lake and Lakewood.

One last point: In an era where wines around the world often are 14 percent alcohol or higher, nine of these 10 wines are 11 percent to 12.8 percent. Only one, the Onabay, rises to 13.3 percent.

Red Tail Ridge, near Penn Yan, N.Y., is run by the husband-and-wife team of Nancy Irelan and Mike Schnelle. Ms. Irelan, who has a doctorate in grape genetics, handles the winemaking and Mr. Schnelle takes care of the vineyard. While Red Tail Ridge produces the Finger Lake standbys of riesling and cabernet franc, I’ve been especially interested in their exploration of other sorts of grapes, like teroldego, lagrein and blaufränkisch. This 2017 is fresh and graceful, with spicy flavors of dark fruit and an underlying earthiness. Red Tail also makes excellent sparkling wines.

Bloomer Creek on Seneca Lake, Kim and Debra Engle’s labor of love, has long been one of my favorite producers in the Finger Lakes. Their idiosyncratic, experimental style always surprises, and the wines are the products of meticulous work in both the vineyards and the cellar. Like Cheval Blanc, the great St.-Émilion to which White Horse pays homage, this is a blend of cabernet franc and merlot, roughly 70 percent to 30 percent. It’s balanced, age-worthy, energetic and savory, and it’s always a great value.

Another husband-and-wife team, Tom and Susan Higgins, owns Heart & Hands on Cayuga Lake in the Finger Lakes, specializing in riesling and pinot noir. This dry riesling is a blend from several Finger Lakes vineyards and was fermented in steel tanks. It’s vibrant, energetic and chalky, with refreshing lime and herbal flavors.

Pinot blanc is a sadly underrated wine that I enjoy in its many guises. Since its inception in 1992, Lieb Cellars on Long Island has been a staunch advocate of pinot blanc, with good reason. Year in and year out, this is a delightful, refreshing warm weather wine. It’s dry and creamy, with a rich texture and just the barest prickle of carbonation. Like many pinot blancs, it’s not at all flamboyant yet quietly appealing.

Just as Lieb Cellars has stuck with pinot blanc despite its relative anonymity, Paumanok has been a chenin blanc partisan regardless of fashion. Its Minimalist cuvée is made from Paumanok’s oldest chenin blanc vines, planted in 1982 and subjected to minimal winemaking techniques. It’s simply pressed into steel barrels and left for seven months. That’s pretty much it, other than a small amount of sulfur dioxide. The result is fresh, rich, floral and surprisingly light at just 11 percent alcohol. In a word, lovely.

For this red, Roman Roth, the winemaker at Wölffer on the South Fork, blends cabernet sauvignon, malbec, cabernet franc and petit verdot — all Bordeaux grapes — with a little bit of pinot noir, the red grape of Burgundy. Well, if you are making wine on Long Island, why be bound by Old World tradition? It’s delicious, harmonious and savory, with a touch of licorice and just enough of a tannic grip to give shape to the wine. Just right for burgers or chili con carne.

The Finger Lakes is the best source for riesling in the United States. Of all the Finger Lakes rieslings I know and like, I can’t think of a better one than the Ravines Argetsinger Vineyard cuvée. This is not the only riesling made by the husband-and-wife team of Morten and Lisa Hallgren. Their basic dry riesling, at $18 or so, is a great deal. But the limestone slope of the Argetsinger Vineyard, on the southeastern shore of Seneca Lake, produces grapes with extra length, depth and resonance. If you can find a bottle, treat yourself.

In the Friuli Venezia-Giulia of northeastern Italy, pinot grigio was historically made by macerating the juice of the grapes with the pigment-laden skins. The result was a copper-colored wine with a rasp of tannin that was a far cry from the brilliant clarity of modern pinot grigio. This style of pinot grigio was called Ramato. It fits into the genre now fashionably known as orange wine. This version, made by Channing Daughters, a relentlessly experimental South Fork producer, sees a relatively brief maceration and so is barely tannic. But it is fresh, lively and enticing.

Nathan Kendall makes excellent rieslings and pinot noirs west of Seneca Lake, as well as the superb Chepika sparkling wines, made in partnership with the sommelier and restaurateur Pascaline Lepeltier. This is his first cabernet franc, and it’s gorgeous. It’s intended to be easygoing, and is lively and energetic, with aromas and flavors of fresh raspberries, flowers and an earthy, chalky undertone. Mr. Kendall bottles it without any additives, so keep it cool and enjoy.

This cabernet franc, co-fermented with a little malbec or côt, as it’s called in the Loire Valley (pronounced “coe,” get the pun?), is more traditionally structured than the Nathan K. cabernet franc. But it’s still delicious — juicy, balanced and lightly tannic, with flavors of licorice and red fruit. Bruce Schneider, an Onabay consulting winemaker, also makes an excellent Finger Lakes cabernet franc under the Schneider & Bieler label. Try both and compare.

Home Videos The WORLD of WINE – Wine News. Cheap wine, tasting notes and cooking with wine The World of Wine – May 2021 … END_OF_DOCUMENT_TOKEN_TO_BE_REPLACED

How to visit Napa Valley on a Budget. In this video Carson and I explain a few ways to enjoy Napa on the cheap. Tip and advice about how to visit Napa … END_OF_DOCUMENT_TOKEN_TO_BE_REPLACED

Home Videos Get To Know Argentina Wine | Wine Folly If you love Malbec, Argentina is your ultimate wine region. But that’s not … END_OF_DOCUMENT_TOKEN_TO_BE_REPLACED